Today we entered Alaska!  We have spent a month in Canada.  Now we have about 6 weeks in Alaska.  It was just a short drive, 113 miles, to Tok.  Within the first half hour, we saw a bear.  Although it is brown, it us a black bear. 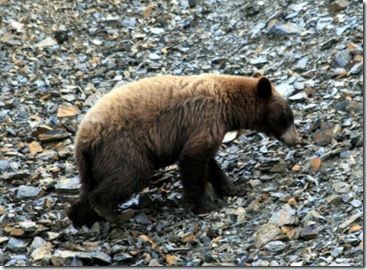 At the Yukon-Alaska border, a group of passengers from a Holland-America tour bus were taking each others’ pictures at the Alaska welcome sign. 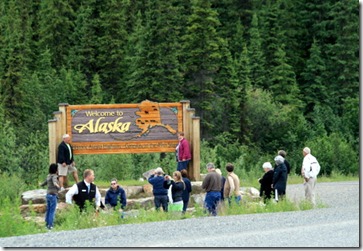 A few more miles and we came to the US Border Station.  We saw lots of the Border Patrol while we were in Texas.  It was good to see them again today.  I forgot about the rules against bringing in fresh fruits and veggies.  I had to turn over tomatoes and some grapes.  I don’t understand it.  We went to a store in Tok and bought more tomatoes grown in Mexico, just like those I had to leave behind. Crossing back into the US means we don’t have to tax our brains as much.  We are back to miles and gallons, Fahrenheit and pounds instead of kilometres, litres, Celsius and kilograms.  Yea!

We saw this old truck on a hill above the highway.  It must date back to the building of the Alaska Highway. 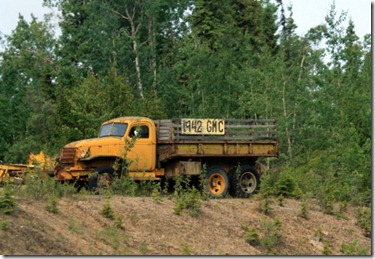 On the whole, the roads are much better here than in Yukon.  The first 14 miles past the border station were new and very smooth.  Then there was some frost heave.  But it isn’t as bad as yesterday.

The road borders the Tetlin National Wildlife Refuge, which has includes hundreds of lakes, many unnamed, and hosts a great number of birds, both nesting and migratory.  It provides habitat for migrating sandhill crane and nesting trumpeter swan.  We hope be to able to see a little of the refuge while we are here. 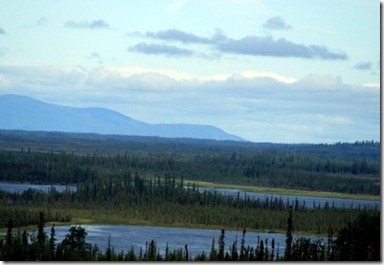