There isn't much for tourists to do in Dawson Creek, especially when they don't feel very good. We did make the obligatory visit to Milepost 0, where the Alaska Highway begins. 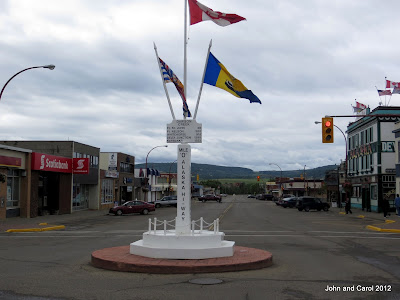 Some other folks traveling to Alaska were there, as well. So John took their picture and they took ours. 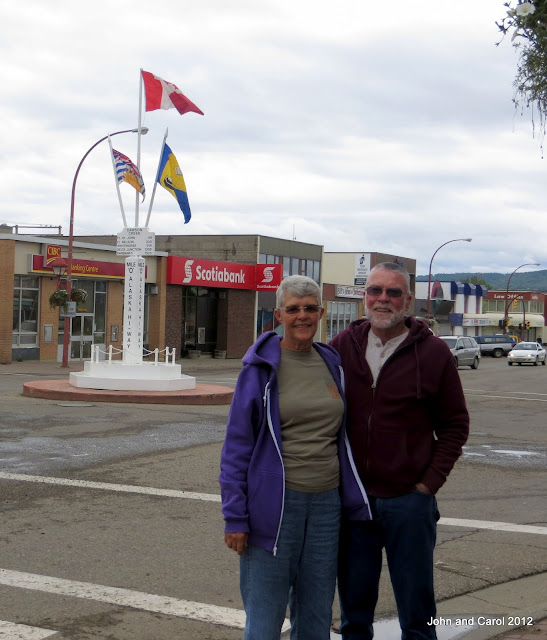 We visited the Northern Alberta Railways Park and checked out the art gallery, gift shop and exhibit of historic Alaska Highway construction photos. That was very interesting. I just finished reading Stephen E. Ambrose' book, "Nothing Like It in the World" about building the Transcontinental Railroad in the 1860s. Building the Alcan is nearly as impressive.

A few weeks after the Japanese attacked Pearl Harbor, 10,000 US troops came to Dawson Creek to begin the road. Eight or nine months later, depending on what you read, they completed it to Delta Junction in Alaska. It was spurred on when Japan invaded two islands in the Aleutians. Construction was done from both ends, meeting in the middle at Beaver Creek, Yukon Territory, October 28, 1942.

The photo display described brutal winter conditions and terrible mud. River crossings began as pontoon bridges, then were improved to temporary wood bridges, then upgraded to metal where needed. One hundred thirty-tree metal bridges were mass produced for the job.

We drove through the Dawson Creek city center and saw this interesting hotel. We checked out two small shopping malls--nothing to write home about. Then returned to the RV.
Posted by John and Carol at 2:07 PM