So far this Wednesday evening, we are the only rig in this campground loop at Park Lake Provincial Park in Alberta. We love it. The only sounds we hear are birds and ground squirrels. We have had a relaxing day—walking and running, weight training, working on genealogy, birding, airing the tires to prepare for departure on Friday, a haircut for John.

Days like this are as important as travel days and time as tourists. Years ago, before we began traveling extensively in our RV and before we went full-time, this is what it was like to “camp.” We don’t consider what we do “camping,” but we still enjoy spending time like we did then. We can’t do it in commercial RV parks but we can do it in state (provincial) parks that aren’t crowded.

Posted by John and Carol at 7:43 AM No comments:


My morning walk turned into a nature walk as I took the path around Park Lake. I saw several different kinds of ducks, some White Pelicans, lots of red-winged blackbirds, and quite a few yellowed-headed blackbirds. I used to really like the red-winged variety, but there were so many at Santa Ana NWR that I wasn’t interested in taking pictures of them here. I did like the yellow-headed ones, though. Aren’t they beautiful? 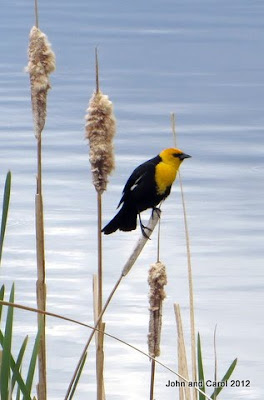 These cute Richardson ground squirrels are everywhere in our campground. They are really cute, but if their numbers keep increasing, the RVs will sink into the ground where they have made their burrows. 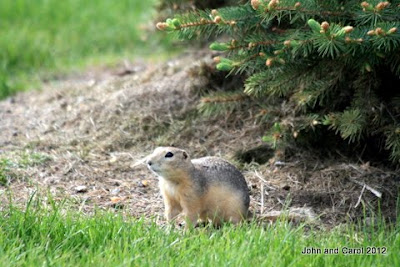 After lunch we went into Lethbridge to visit the tourist information center and get some Canadian cash, fuel and groceries. At first, everything went well. The young people staffing the tourist center were friendly and helpful. The bank’s ATM worked fine. We were off to Wal-Mart. Things were the same as we are used to, and not the same. The produce was much better than we had been seeing in Montana and Wyoming. We found most of the brands we wanted. And saw some that were new and looked interesting. Wal-Marts have a definite blueprint. But, when we looked at the customers and the meat and the ethnic food sections, we knew we were no longer in the Rio Grande Valley. I found it helpful to have both meat and produce prices given both by the pound and by the gram. I find the metric system unfamiliar and confusing.

The problem came at the Canadian Superstore Gas Bar. Our credit card didn’t work. And while John was struggling with that, I received a text message saying there was a fraud alert on our account. I called back, gave Card Member Services enough identifying information that they lifted the block on the account, and thought everything was fine. It is nice to know they realized there might be a problem when our credit card was used twice within maybe 15 minutes in a foreign country. But the trouble got worse when we tried again to run the card through and it wouldn’t work. To make a long story short, after a 10 minutes or longer call to Customer Service (at 20 cents a minute on Canadian International Roaming), we were assured the travel note on our account would make it possible to use the card in the future. But they wanted the Gas Bar to check our card and ID, then call Card Member Services, then the charge would go through. We paid by debit card and just hope it works in the future.

Then we went to McDonalds, ordered a snack, and used their free wifi.

Oh, the adventures of travel!

We wondered what this strange building was. When we got up close, we discovered it is a steak house restaurant. 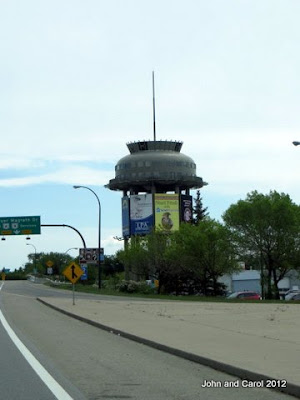 Aren’t these painted barrels a good decoration outside a liquor store? 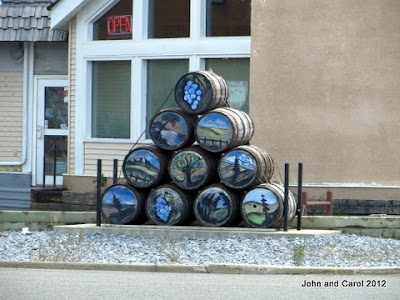 Canadian Pacific RR stores unused cars on a track near our provincial park. They store lots and lots of cars. This long line is only half of the ones they have there. 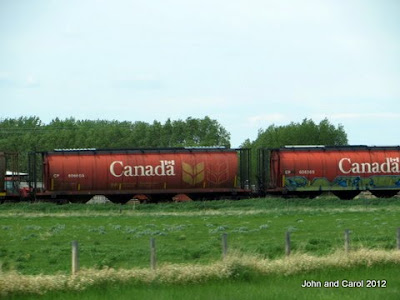 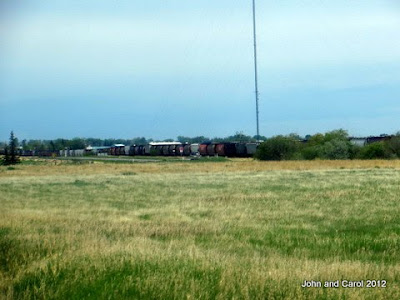 Posted by John and Carol at 7:42 AM No comments:

Today we drove into Canada, where we will be for about a month before going into Alaska. At the border crossing into Coutts, Alberta, everything went smoothly and we were soon continuing on to Park Lake Provincial Park near Lethbridge. Waiting at the border crossing, I checked our mileage and discovered we have driven 3,077 miles since leaving Alamo, Texas. 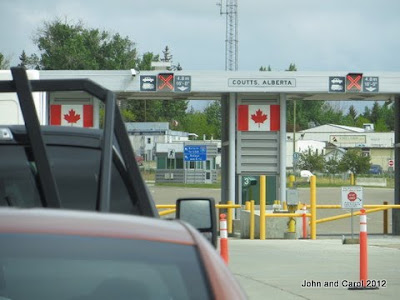 The landscape was much the same the whole trip, with lots of wheat and hay (we think) fields.
In both Alberta and Montana, the land is dotted with oil rigs. 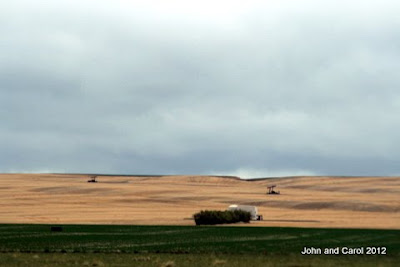 At one point, we drove down a 7% grade to cross the Marias River, then back up again. What a pretty place. 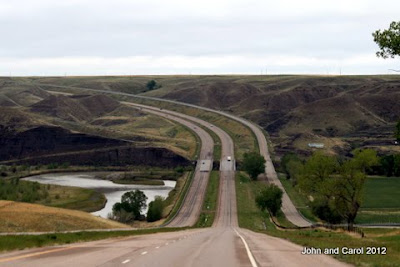 And we saw a huge number of grain silos of all shapes and sizes. 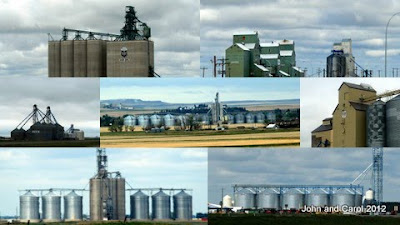 We were very glad we were only driving a truck and trailer, not this farm machinery. 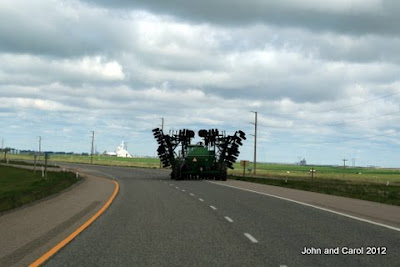 Lethbridge is the site of the longest and tallest train trestle bridge of its type in the world. It is over 100 years old. 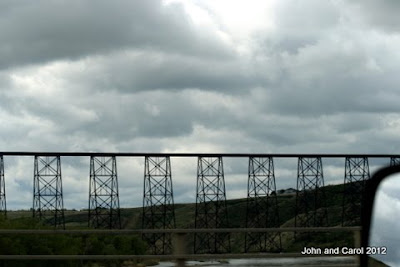 This American flag seems like a fitting end to my Memorial Day blog. This is a day to thank those who have served our country in the military and to remember our friends and family who have died. May they rest in peace. 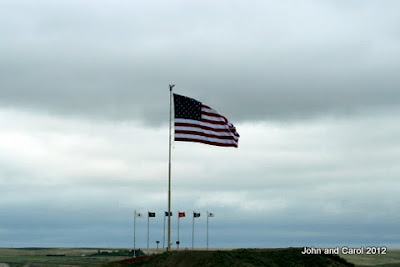 This is what we woke up to this morning--snow and a low temperature of 33. The high was only 40. 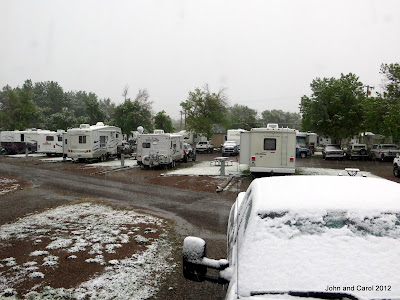 We decided to drive 40 miles to Fort Benton to learn more about the life and times of the earliest settlers in Montana.We drove through beautiful wheat country (as best I could see through the snow). 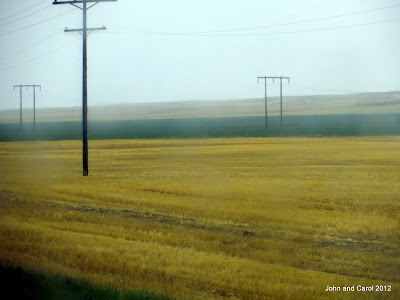 We saw lots of grain storage along the railroad tracks. 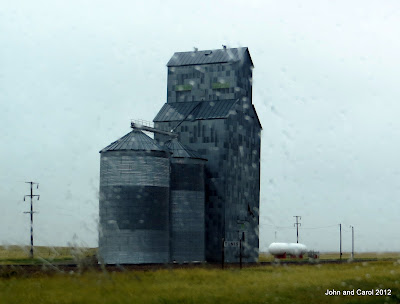 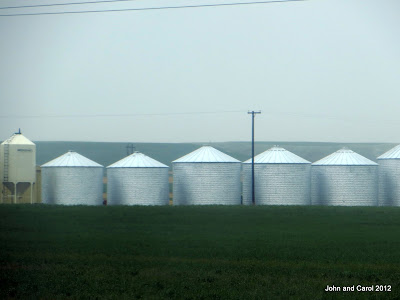 In town we first saw this sculpture of explorers Lewis and Clark and Sacagawea. 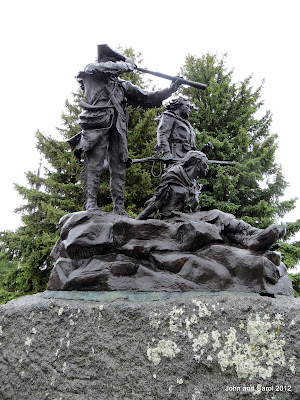 Fort Benton was a very early steamboat port on the Missouri River where goods arrived from the east and fur pelts were shipped to buyers on the East Coast and in Europe. There are great views of the river. 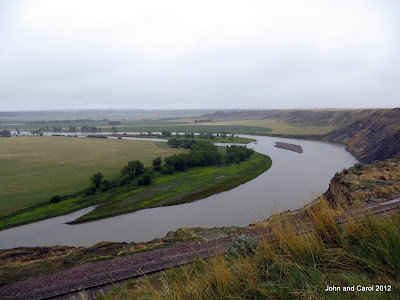 The original fort was built out of adobe bricks. It has been restored with more solid bricks. Look what the weather here does to adobe. 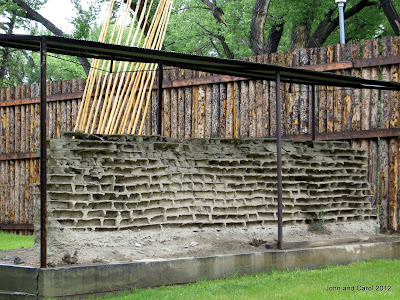 One of the restored buildings shows the room where traders met with the Indians. You can see both the goods offered for trade and some of the fur pelts the Indians brought in to pay with. 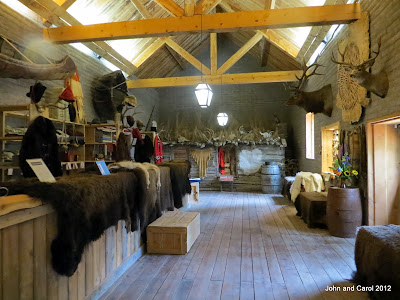 Look at the great variety of fur pelts that could be traded. 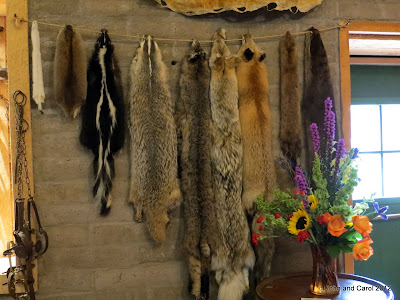 There we met Mike Nottingham, a museum interpreter who is also a Mountain Man. As he and John were talking and sharing stories of their Montana ancestors, it turns out Mike's great-grandfather would probably have known John's great-great-grandfather. It sure is a small world. 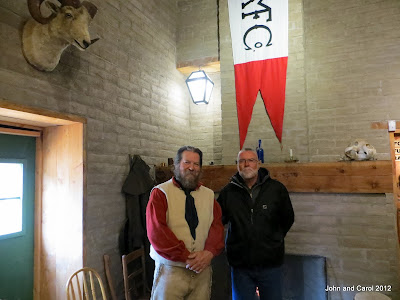 Another building contains an amazing art collection. Robert Scriver was born on the Blackfeet Reservation in Canada and did numerous sculptures portraying the Blackfeet way of life. 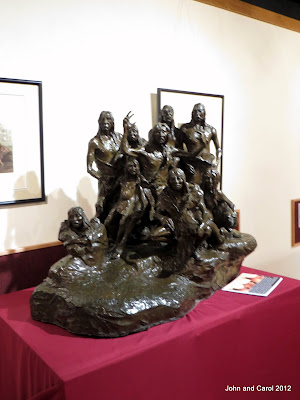 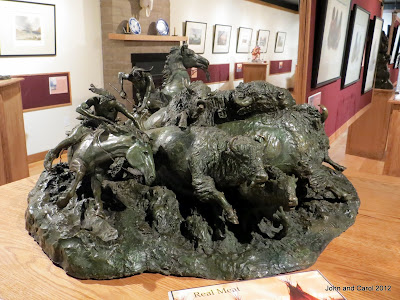 In the years 1832-34, Prussian Prince Maximilian and Swiss artist Karl Bodmer made an expedition to the American West to record the natural world here. You can read more about them here. Bodmer made numerous water colors of what they saw, then engraved special plates from them. Prints from those plates were then hand colored. In the 1990s another 125 sets of prints were made and hand colored. A museum supporter acquired one whole set for the Fort Benton museum. This print depicts the Citadel, a rock formation seen along the Missouri River. 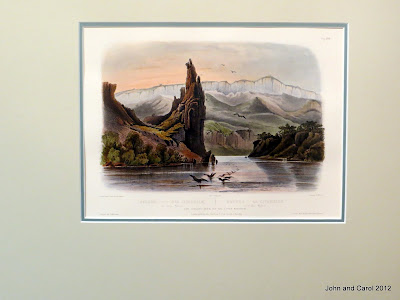 I vaguely remember hearing about Prince Maximilian somewhere in the past. I know a very little about early trading and settlement in the American West. Now I know a whole lot more. I really enjoyed this day because I love learning new things, even if I have to venture out in the snow to learn them.

These raindrops pretty much tell you about this day in Great Falls, MT.

The temperature was 42 degrees when I woke up.  I think the day's high was 45.  Now, at about 7:30 pm, it is 39.
It was a good day to stay inside and not go anywhere.  We did do the laundry—three machines full, then four dryers worth.  John prepared postcards for our grandchildren; I finally wrote thank-you notes for Mother's Day gifts.  John did more genealogy research and I read a magazine.
When we had a period without rain, we walked around the campground, getting in a couple of miles.  I tried out a new recipe for dinner.  That is about it.  For the past 25 days we have traveled or had repairs done or visited family or been tourists.  Today, we just lived our life.
Monday, we will be going into Canada.  We don't know how often we will have internet access.  It will mainly depend on whether we are in commercial RV parks or provincial parks.  Even when we can get a signal on our Verizon MiFi, I learned it costs $20 for each 100mb of use!  We won't be doing any surfing or reading blogs at that rate.  And cell phone coverage will be limited to areas along major roads and probably not exist in the Yukon.
Eight years ago when we drove to Alaska, we put away the cell phone in Houston, BC,  when I discovered that unlimited roaming means it is unlimited as long as you have more minutes of non-roaming calls in the same billing period.  We relied on payphones for the rest of the trip.  And internet was only available by plugging into a jack on the side of a payphone or getting the RV park staff to let you plug into the fax line.  I remember that AOL provided a way to download all your email, without opening them, then we read them offline.  I don't think that is possible today.
When we were in Anchorage, the park had instant telephone hookups.  We got one and used dial-up internet a lot.  Today, we don't have dial-up access.  And Bear Paw RV in Valdez had DSL lines available to campers.  I made the 2-block walk from our "Adult Only" section to the office once or twice a day.  When we were in Petersburg, AK, on the Inside Passage, the harbor master's office let us use their fax line to check email.
I know it will be better this time.  But we are still going to be experiencing a change in our daily routines:  no satellite TV and limited internet.  It will probably be good for us, don't you think?
Posted by John and Carol at 7:53 PM No comments: