Finally, we have reached the Alaska Highway. The road was built in 1942 and 1943 by the US, following Japan's attack on Pearl Harbor. It runs 1387 miles from Dawson Creek, BC, (where we are now) and Delta Junction in Alaska. But, more on that later. We drove 256 miles from Prince George to here.

We realize we need to lower our expectations for the RV parks we stay in. We are at Mile 0 RV park and it is OK. Cost, $37 Good Sam rate. We had the same experience when we came here before. These parks only have campers from May to early September. John read a review of a restaurant in Fort Nelson (our next stop). The reviewer wrote, "The restaurant was OK. They cooked, I didn't have to. That's all that really matters." That has to be our attitude. We don't plan to pull off on the side of the road and boon-dock over night. So, any park that provides water and electric is giving us all that really matters.

The dandelion is not the BC provincial flower, but it really should be. They are everywhere. We can tell when we go up or down in altitude. Up--they are blooming; down--they have gone to seed. 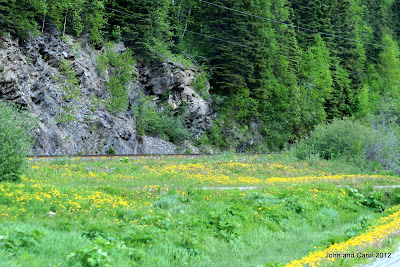 The scenery is beautiful. These mountains have more rounded shapes--they are older, more worn than those in Jasper and Banff National Parks. 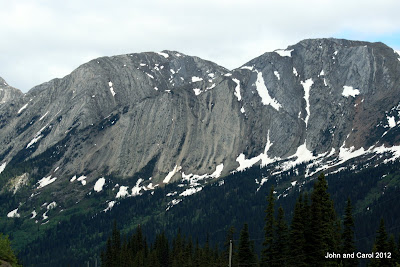 Most are covered with trees. 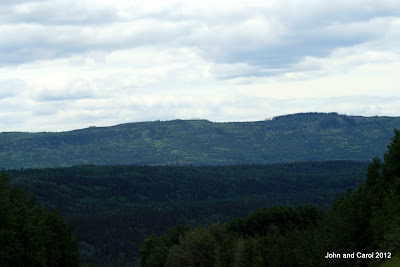 That is why we saw lots of logging trucks. 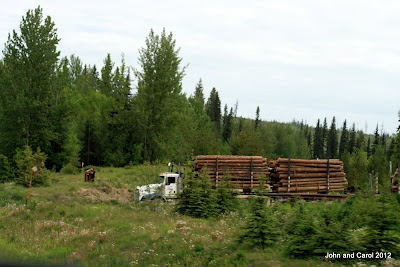 At times there we sharp curves. 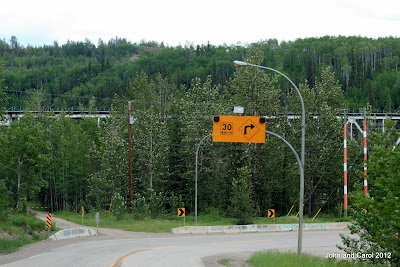 We didn't see any washed-out roads or landslides across the road, but the rivers were muddy and we saw waterfalls frequently. 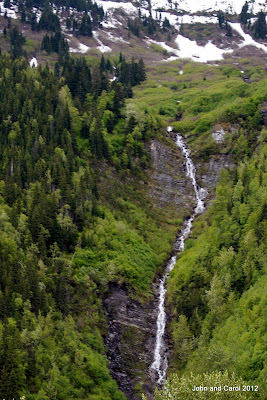 At one point, we saw a truck stopped in the middle of the road with a flashing yellow light. What on earth? we wondered. As we came closer, we saw it was warning of highway painting. Obviously, the traffic is so light they didn't need to put out warning signs. Just a truck in front and one in back. Ah, rural Canada. 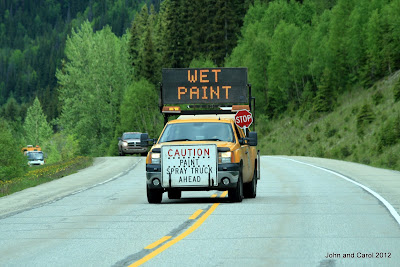 Shortly before reaching Dawson Creek, we drove through Chetwynd, the Chainsaw Carving Capital. The 2012 International Championship competition was June 8-11. There were carvings all along the road through town. 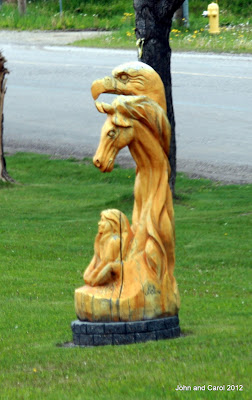 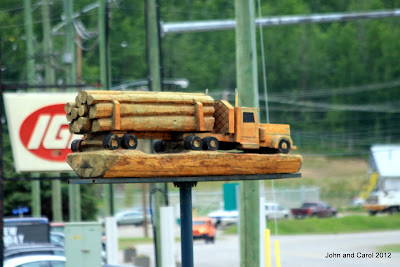 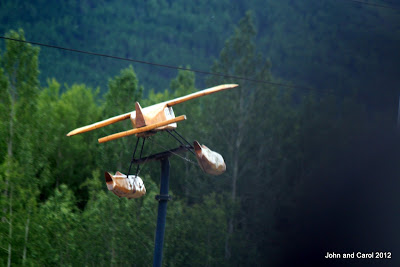 By the way, John is feeling better, recovering from his cold. Now I have it, but I don't think mine is as bad as his.
Posted by John and Carol at 10:03 AM