We were out just before 8 to take our RV to A & M RV for work on the slide. They impressed us with their facility and the professional way they approached the problem. After backing the trailer into a service bay, we were told to go enjoy Anchorage for a while.

When they called us and said we could pick up the rig, we were told they would explain what they had done and what they were not able to do. We learned that the grease used by the last repair facility was absolutely the wrong method. (We were also told that on Friday by the slide manufacturer.) They also said that the slide was not properly aligned, even though work had been done on that two weeks ago. They think we can safely get down to the lower 48, and even to Arizona, before major repairs are made, but we will need more work done. If we had it done here, it would take at least a week to get the parts shipped in (at great expense) and the repairs done.

We knew we were taking risks, bringing our 36-foot home to Alaska. We have driven many, many miles and many roads are really bad. Frost heave makes them very bumpy. This may be part of the price we pay for this trip. We did look at buying a smaller RV to use, but couldn't find anything at a price that made good sense. It is just the risk we took and we will have to deal with it.

While they worked on our RV, we went to the Potter Marsh Boardwalk, part of the Alaska Coastal Wildlife Refuge. It rained pretty much all morning. We had hoped to see a lot of birds, but we mainly saw a pretty marsh. 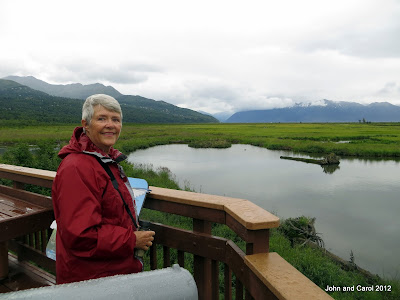 There is quite a boardwalk wandering through the marsh. There were a good number of visitors and locals out walking there. 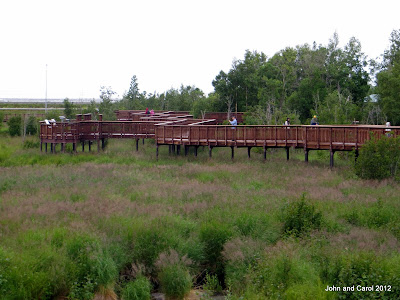 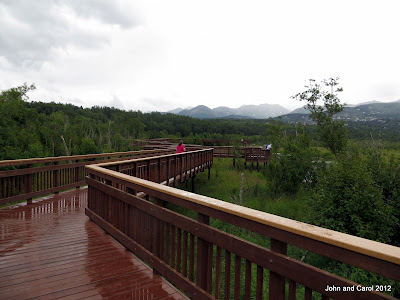 We enjoyed talking to the husband and wife who are serving as hosts this summer. This is their first volunteer stint, since they just retired. They are having a good time.
Posted by John and Carol at 9:05 PM