What is there to do in Delta Junction? We found so much today, I will split it into two blog posts. First, of course, we had our picture taken at the official end of the Alaska Highway.

The Visitor Center had a great collection of wooden model trucks, donated by Michael and Ingrid Clay.

We encountered a group of 24 German tourists, traveling in this interesting bus. They flew into Toronto and are spending a month touring Canada and Alaska. They sleep and eat in the bus.

We see a lot of equipment from the construction of the Alaska Highway. Near the visitor center we saw an old roller for smoothing the road, as well as some other really big piece of equipment. I couldn't keep John off the old vehicles.

I had seen wooden water pipes before, but never a wooden culvert. I wonder how it held up under the road?

The Sullivan Roadhouse, which served travelers along the Valdez to Fairbanks trail during the early years of the 20th Century, has been moved to land near the Visitor Center. There were beautiful gardens out front. (My next post will be all about another roadhouse.) 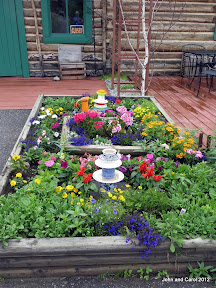 We also visited the Delta Meat and Sausage Company, where they sell sausage made from buffalo, reindeer, elk and yak, as well as beef and pork. They also have beef, buffalo and pork cuts, all from Alaska-raised animals. We had to sample the various sausages. We left with reindeer polish sausage and elk summer sausage. The wild meats are mixed with beef and pork in the sausage. We also bought some pork chops.

All along the roads in Yukon and Alaska, we have been seeing beautiful wildflowers. Today, since we weren't towing the trailer, John pulled over so I could takes some pictures.