There Was a Little Delay

We were ready to leave Gold Canyon and head to Williams, AZ, at 8:30 this morning. But we didn't actually pull out until 10:30. The delay at first caused a bit of panic. The batteries in the RV were dead. We need the 12-volt system to raise and lower the landing gear of the 5th wheel, to open and close the slides and to reel in the power cord. John said, "call AAA." I said, "We don't have AAA, we have Coach-Net." That turned out to be a really good thing. Instead of AAA dispatching someone with new batteries, a technician from Coach-Net called back in about 45 minutes later. He walked John through several diagnostic tests. It looks like the switch in the controls for the landing gear that reads "In for storage, out for use and charging" means the batteries don't charge when that switch is in and the control panel is closed and locked.

The technician told us to put the switch in the charging position and wait 30 minutes to see if they batteries had a charge. So we set that up and went for a walk. When we returned, the batteries had charged enough we could complete everything and hitch up and pull out of our site. 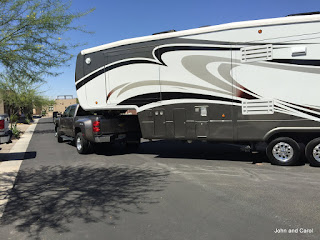 Apparently, our RV had been sitting long enough without charging the batteries that they were totally out of power. The funny thing is, I harp at John for never parking without hookups so we can run down the battery. (You have to do that to keep them strong, don't you know?) Apparently, our RV took care of that all on it's own. At least, we hope that is the problem. If so, we saved quite a bit by not getting new batteries today. And, to top that off, our Coach-Net service is free till 2016. We received one year free with the Mobile Suite purchase and last summer we attended a Mobile Suites Rally where RVsForLess, a rally sponsor, gave us an additional 2 years free.

It feels good to be back on the road after sitting in southern Arizona for 7 months. On our trip north on the 101 and I-17, we saw this truck hauling several small trailers that looked like they belong to the US Army, each with a box inside. 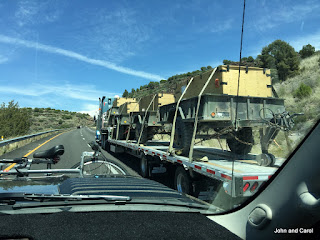 We also saw this smoke on the horizon. 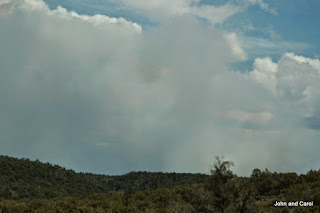 Before we could get too worried about a wild fire, we passed a sign that read, "Managed Burn. Do No Report."

We are at Railside RV Ranch in Williams for the next few days. Why? Because the Grand Canyon Train runs right by the park. We can even watch it through our back window. 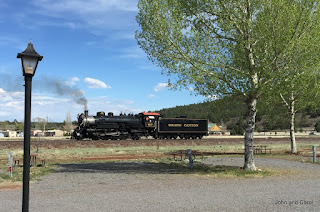 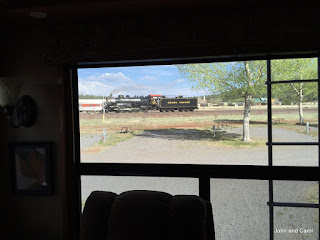 We were planning to make reservations for the train sometime next week, but when we checked in here we learned that, on the first Saturday of the month, the train is pulled by the steam engine. Since tomorrow is the first Saturday of May, we quickly made reservations to ride tomorrow. After all, we spent a week in Skagway, Alaska, waiting to right the White Pass and Yukon train pulled by a steam engine. (Skagway is really not worth a whole week unless you have a really good reason to be there.) Tomorrow will be fun!
Posted by John and Carol at 8:34 PM