Albuquerque has protected a lot of open space around the city. Today we walked about five miles on the Bosque Trail along the Rio Grande River north of I-40. As we started out from the visitor center, we came to this statue. It had been carved from a dead cottonwood tree. Certainly more interesting than a stump removed and thrown out in the bosque (forest). 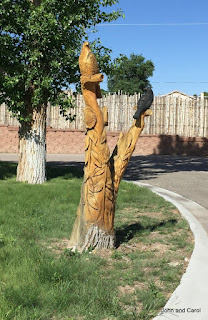 The trail starts out on a gravel path next to a canal. We saw several people running along this trail. 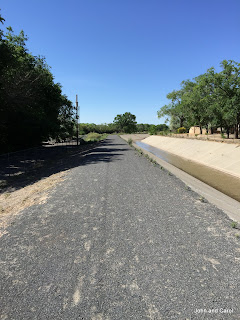 There were a number of very nice homes on the other side of the canal. 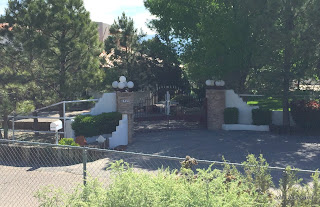 We saw quite a few lines of jetty jacks like these. Jetty jacks are i-beams welded together and strung with wire that were placed to prevent flood debris from impacting agricultural land and human settlements. They have worked so well that the environment along the river has changed, in part because the jetty jacks slow down the river flow and the floods no longer bring in new mud to enrich the soil. The jacks have become controversial and it looks like they are slowly being removed.

I'm not sure what the black plastic container on the right is there for. We saw it in one other location, as well. 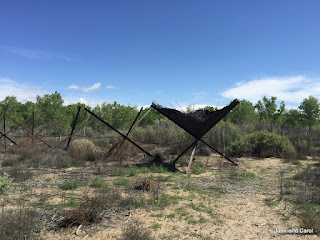 The open space gives us an idea of what the area along the river must have looked like when the first Europeans came to this area. The trees are beautiful. The ground around them isn't as pretty, but you do know you are in a natural area. We saw a small lizard doing push-ups. (Sorry, no photo) Really, it looked like that is what he was doing. As we walked along, we heard other lizards scurry away as we passed by. You can see how dense the forest of bosque is here. 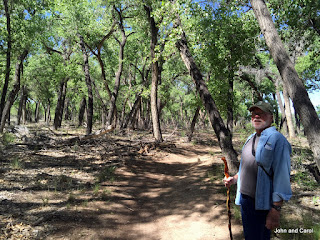 I had read that there are pieces of public art along the trail. We saw two of them. One was wire wrapped around a tree stump. It was ugly and the description I read was so intuitive and "out there" that I didn't take a picture. The second sculpture was called Arboreal Dome and is made from downed, dead cottonwood branches. It was at least interesting. 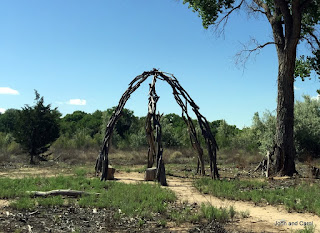 We also came across this lean-to in the forest. Obviously of human construction but it wasn't clear why it was there. 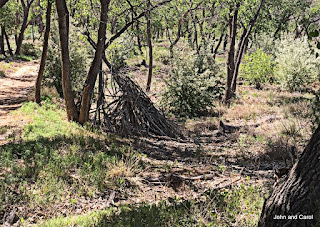 And here is the mighty Rio Grand. Originating in the Colorado Rockies, the river flows south through New Mexico and then, beyond El Paso, Texas, it become the international border between the US and Mexico. We have seen it in many places along it's journey south and east. Today it is full of spring runoff from the melting mountain snowpack in Colorado and New Mexico. 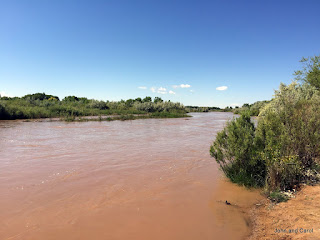 We enjoyed exploring this part of New Mexico and we may be able to visit one of the other open space areas before we leave the area. We chose a good place to wait out the Memorial Day weekend crowds. We expected crowds on the trails today and they didn't materialize. As other RVers know, it always important to plan ahead to be sure of an RV site on holiday weekends like this.
Posted by John and Carol at 2:07 PM