The Power of Advertising

You have probably heard of Wall Drug in South Dakota. Why? Because there are signs all along I-90 as you approach Wall, announcing free ice water if you stop at Wall Drug. Today, Wall is a major destination for travelers. Almost the same thing can be said for Winslow, AZ. Why do we know about it? Most of us have heard, and can repeat, at least a couple of lines from the song, Take It Easy. "Standin on the Corner in Winslow, Arizona, watching all the girls go by." That may be the only song I know from the Eagles (I'm not much of a pop music person), but even I know that line. And each year thousands of people have their picture taken at Standin on the Corner Park. Even John. 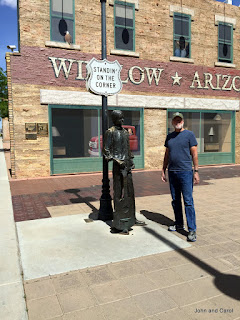 The corner is on famous Route 66. 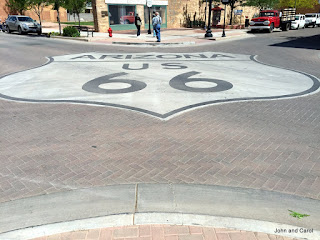 Winslow is a fun town to visit and we have spent five days at nearby Homolovi Ruins State Park. The town has a number of murals. 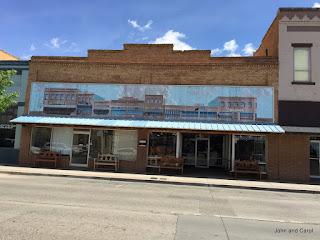 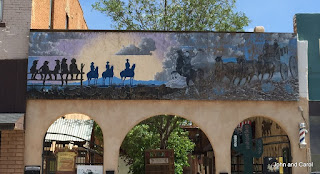 There was a cute statue? decoration? in front of the store across the street from the corner. 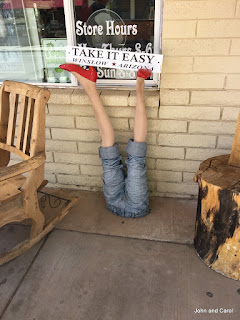 The Winslow High School mascot is the bulldog. One corner on the road out of town has this great statue. 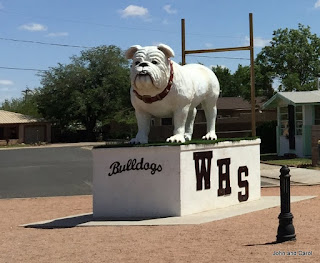 And we really enjoyed the sign in a cafe window, especially since we will celebrate our 50th anniversary next  month. I wonder if  Jim and Carolyn are the owners or if the celebrating couple are just being honored before the cafe is sold. 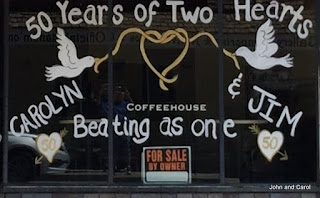 We stayed in Homolovi Ruins State Park two years ago. We spent three winters volunteering at Casa Grande Ruins in Arizona and have visited Mesa Verde National Park, so we are fairly familiar with the native peoples who settled here in the southwest. Although less well known, Homolovi Ruins shows some of their settlements. Modern-day Hopi people believe this was the home of their ancestors.

This informational kiosk tells about one of the villages visitors can explore here in the park, Homolovi I. A second village, Homolovi II, is a little over two miles away, at another location in the park. 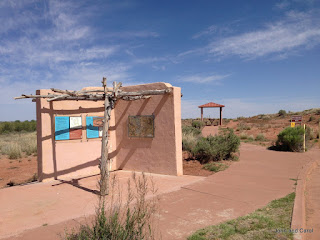 If you are interested in more information about Homolovi Ruins, you can check out my blog from two years ago here of the park's web site here.

Mormon settlers also came to this area in 1876, under the leadership of General Lot Smith. They moved on in 1881 after a number of floods on the nearby Little Colorado River. The settlement's cemetery is near Homolovi I. 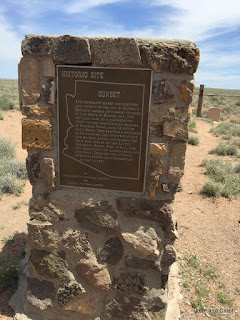 We were interested to see that a couple of the trails in the park had been constructed by Elderhostel groups (now Road Scholar). We saw a couple of interesting RVs here in the state park campground. They are earth cruisers, all terrain RVs. Originally built in Australia, they are now built in the U.S. to be shipped throughout the world. You can get more information about them here.