For the last few days we have had retro TV. Remember what it was like in the 1960s to 1980s when you sat and watched TV, then when the ads came on you rushed around doing things in the house, went to the bathroom, then sat back down to watch again? That was before the age of satellite TV where we can pause, rewind, skip forward and record TV shows. No need to watch commercials. We can pause the program when we want to talk to each other or discuss what was just said or answer the phone. We can watch a 3 pm show at 7 pm by recording it.

We have had satellite TV for probably 15 or more years. When we started RVing, we would take the Dish Network receiver that we used with the TV in the basement out of the house and connect it to the RV television, then move it back into the house each time we returned home. In 2009, when we moved out of the house to be full-time in the RV, we cancelled the service in the house. Fast forward to fall 2014, when we bought our winter house here in Arizona. We decided to get a new Dish DVR when we ordered a satellite antenna installed on the roof. That is when we discovered we would be paying double for the two receivers. They wouldn't let us just pause service in the RV for six months. Instead, we had to return the receiver to Dish. Reluctantly, we did.

The second part of this equation is the portable satellite antenna. John had struggled for years with one he had to aim himself. It sat outside the RV somewhere with a clear view of the southern sky. Finally, we bought a Winegard automatic antenna that finds the satellites all on it own. It saved John sometimes a hour each time we set up the RV. But that antenna took up a lot of room in our RV storage area. A year or so ago, Winegard came up with a much smaller antenna, which we bought this winter. There are always issues when you buy something new, aren't there? We tried to bring the DVR receiver from the house into the RV. It didn't connect to the antenna. After some research, we learned the antenna needed a special receiver, which we bought (rather than lease--that option doesn't seem to exist with the Dish 211z receiver) from Camping World. That was when we experienced retro TV. The 211 is just a receiver, not a DVR. No recording, no stopping, pausing, or rewinding. Yuk.

More research showed we needed an external hard drive to make the receiver into a DVR. Not only that, but apparently USB 2.0 connections are on their way out. Almost every hard drive I found had a USB 3.0, which won't work with our receiver. Not only that, it had to have its own power source. Finally we found one at Fry's Electronics in Tempe. This is what we bought. 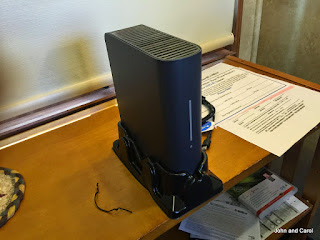 After all this work and frustration, there is some good news. For only $7 a month, we get all the same programing in the RV that we have in the house. And it is pay as you go. We activate the receiver when we want to travel, deactivate it when we return to Arizona, and only pay the $7 when it is active. Much better than paying double to keep both receivers active. John had seen the ads for pay as you go Dish TV but didn't think it applied to us. Who knew? It does now.
Posted by John and Carol at 8:20 PM