Looking Back, Way Back

After our stroll up the 16th Street Mall in downtown Denver, we went to the History Colorado Center, the new history museum. Before going on the road full time 6 years ago, we volunteered once a week at the old history museum, helping keep the computer up to date on the location of items in the museum's collection. We knew they had a new facility--the Colorado Supreme Court needed to expand its building so it took over the location of the old museum.

This sign was right inside the museum entrance. If you visited Colorado in the past, you would see this sign as you crossed the border. A few of the signs still exist, but they don't have the word "Colorful" in full color. 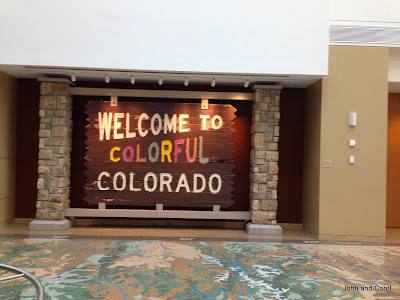 Who hasn't heard of Colorado's Coors Beer? We learned that the company kept afloat during prohibition by manufacturing malted milk powder. 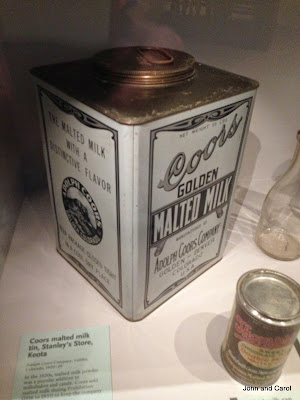 Who knew that a crocheted cover could serve as a silencer on a chamber pot? 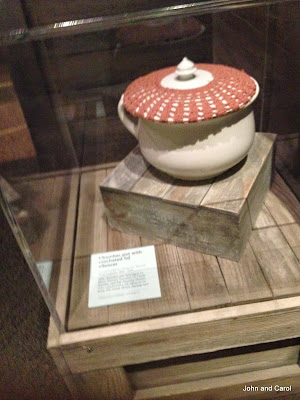 A sad chapter in our nation's history was the internment of people of Japanese ancestry during World War II, many of them US citizens. Numerous states refused to allow refuge camps within their borders because they didn't want "those people" around. Colorado Gov. Ralph Carr disagreed with the internment policy and welcomed the people to a camp in Colorado. Called Amache, it was located in Granada on the eastern plains. At it's height, it house over 7,300 people, two thirds of them US citizens. This sign is a copy of a letter given to people of Japanese ancestry on the west coast, outlining what they were to bring and how to assemble for transport to a camp. 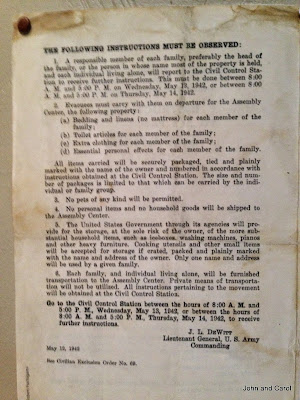 Have you heard of the Denver Boot? It is used to immobilize illegally-parked cars. It really was invented/developed here in Denver. Sorry. 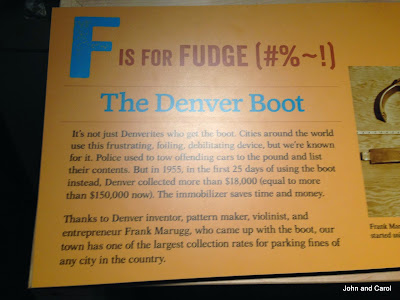 The theme of many of the displays is the issue of race in Colorado. One display talked about the Ku Klux Klan in Colorado. I knew it had had an influence here, but wasn't aware of how great that influence was--or how it was reduced if not eliminated. 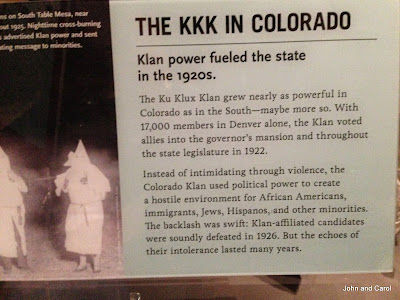 I grew up one block west of Washington Park in Denver. One of the two lakes there had a swim beach, though I never went swimming there. But I was not aware of the 1932 race riot there. 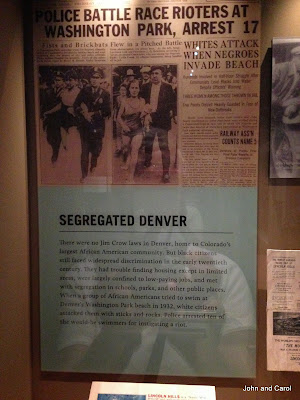 The museum is very kid-friendly. One example of that is this buffalo. 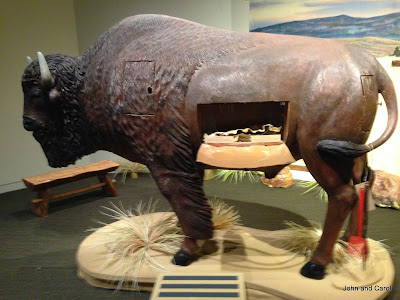 This display illustrates the importance of the buffalo to people living on and traveling through the plains. It shows how different parts of the buffalo are used: the stomach could become a container to carry food; dung provided fuel for fires; large bones could be used as cooking dishes; the coat provided warmth; the trail was a good fly swatter. 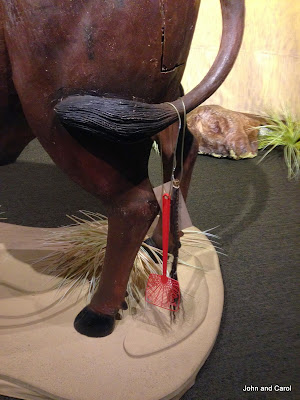