We are in Helena, MT, for a few days to do some genealogy research. John's great-great-grandfather was here for a few years after the Civil War. We didn't know that when we were here eight years ago on our first trip to Alaska. So this year we made sure we had time to learn about his stay here. We had learned that the US Army wasn't able to make this area safe for settlement until after the 1876 Battle of the Little Bighorn (Custer's Last Stand). In reality, that was just about the last stand for the Sioux and soon settlers were able to come to Montana in relative safety. But we're talking about someone coming here in 1865! that was the time of a gold rush. An internet search revealed that the man had been elected to the Third Extraordinary Session of the Montana Territorial Legislature in the fall of 1866. So we knew we would find some information.

We drove to the Helena City and County Courthouse. 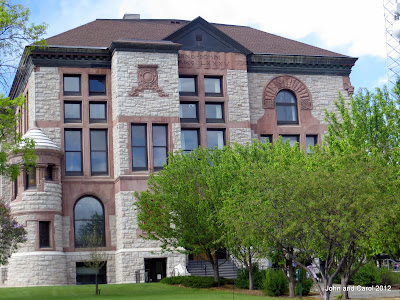 There we learned it literally is a court house. It houses city and county courts. So we drove a mile or so to the building where the Lewis and Clark County Clerk and Recorder offices are located. When we asked to see the grantor-grantee books showing the purchase and sale of property and told them what year to start, the woman said, "Oh. That is really old." We found several entries about John's relative.

Next, we drove a mile or so away and parked in front of the Montana Capitol. 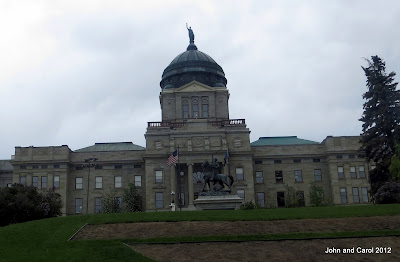 It is across the street from the Montana Historical Museum and Research Library. The staff there was just great. We have never done research anywhere that we received such wonderful help. They asked what we were looking for then began bringing us books and maps and even finding the references in those books. It was great and we learned a whole lot. Now, all we have to do is digest it and then John can add this chapter to the story he has written about this great-great-grandfather.