It's Life on the Road

That's right. The front landing gear, at least the one on the passenger side of the RV, doesn't work. We suspected as much last night, but weren't sure. But sure enough we needed to be prepared. That meant going to the grocery store before hooking up the truck and trailer. Taking a 36-foot RV shopping is inconvenient, to say the least. Then we did all the necessary tasks to leave Fort Stockton. We backed up the truck--it was just a little too high to slide under the hitch on the RV, so John took some air out of the Air-Ride air bags. Then we were able to get hitched up.

The next step was to raise the front landing gear. The passenger side didn't budge; the driver side retracted as it should. When John removed the cotter pin that holds the lower part of the leg to the upper part, boom, the upper part fell down to the bottom. I won't be technical, in part because we don't understand what is going on inside of that 2 x 2 inch tube. Suffice it to say, we couldn't drive away with that metal leg dragging on the ground.

The world is full of really nice, helpful people. The man from the trailer next to us came over and helped John secure the leg--with rope. 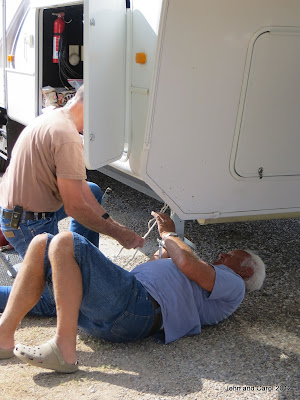 The neighbor really knew how to tie secure knots, while John had a large bag full of rope to be tied. When they were done, we drove off, headed for Roswell, NM, where we are parked tonight.

All of this is inconvenient. We are headed to Albuquerque to have the skylight cover, broken in the hail storm last month, repaired at the same Montana dealer that installed this landing gear just a year ago. Hopefully, they can repair the landing gear the same day. If not? I guess we sit in the RV park in Albuquerque while they get the right parts. Time to catch up on inside work and maybe cleaning, I guess.

Living on the road isn't all that different from living in a regular house. Life happens. Our schedule has to be written in jello, as Nick Russell says. We have plans for Friday and Monday next week, but they can be rescheduled.

We live in our RV, but we aren't on a perpetual vacation. It is daily living; we just change the scenery out the front window regularly. And have a good time doing it.
Posted by John and Carol at 6:30 PM