I can't say that a visit to Cincinnati, Ohio, was anywhere near the top of my bucket list. In fact, we ended up here this summer because we were unable to find a good RV park any closer to Jefferson County, Indiana, where we wanted to do some genealogy research. After planning the visit, we discovered that John's great-great-great grandfather is buried in Cincinnati.

After the last four days here, I would suggest Cincinnati for anyone's bucket list. It is a beautiful, clean, interesting old city and we have encountered numerous very helpful people in the cemetery and libraries we have visited.

Yesterday, we checked out the Findlay Market, Ohio's oldest continuing operating public market and the location of a weekend farmers' market during the summer. 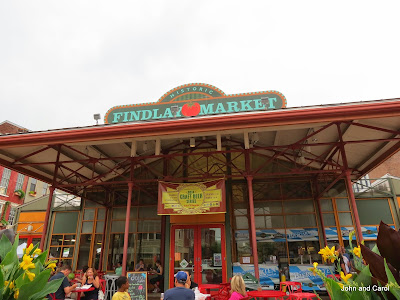 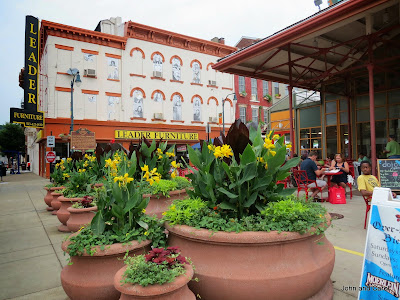 Both inside and outside, the aisles were crowded with shoppers. 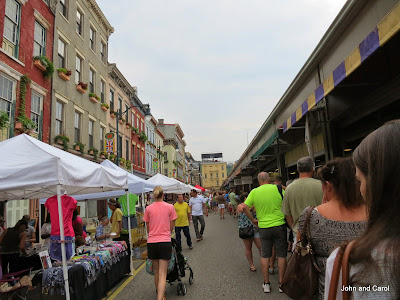 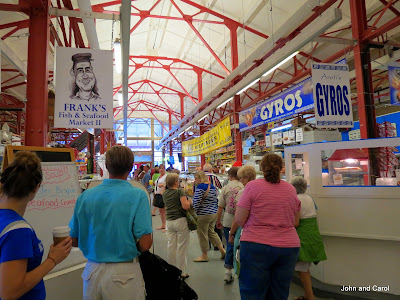 We immediately came on a long line at the Blue Oven bread stall. We decided the bread must be good, so we got in line and bought a loaf of spelt bread. We will eat it with our meal this evening, so I don't know if it is really good or not. 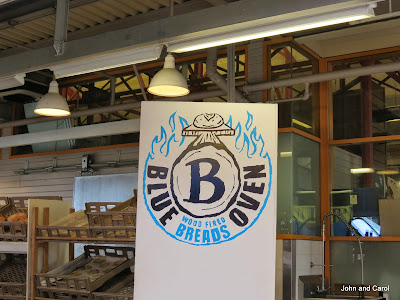 Markets like this always bring out some interesting people. 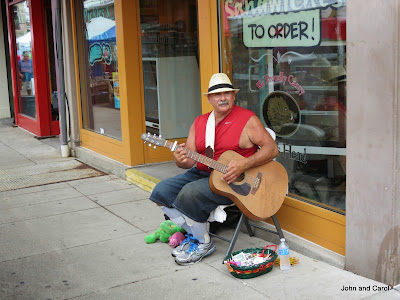 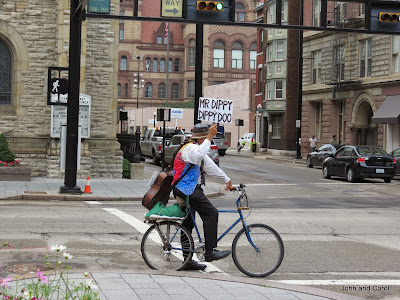 There was lots of good looking, local produce, as well as seafood and beef--including ox tails. I wonder what you do with them? 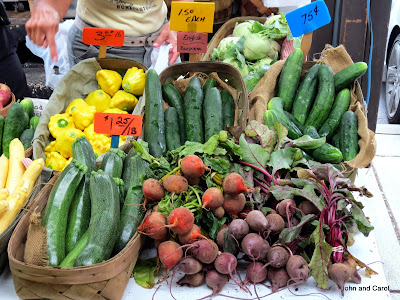 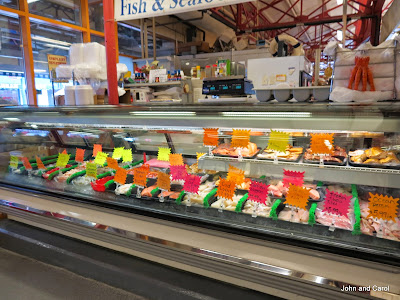 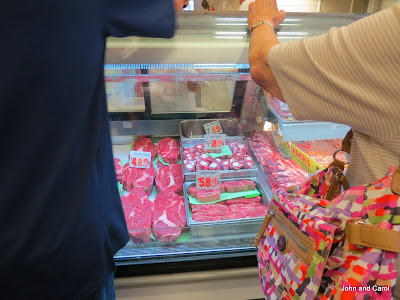 Along the street across from the market, the empty buildings were at least made pretty on the outside. 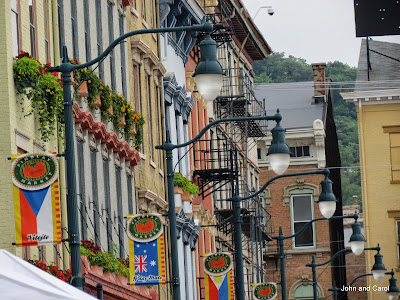 A couple of blocks away, it wasn't as nice. 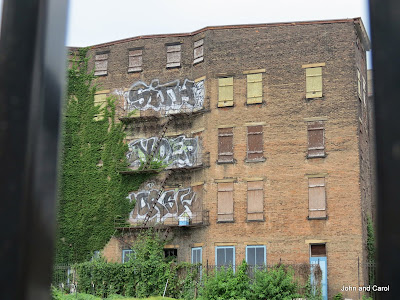 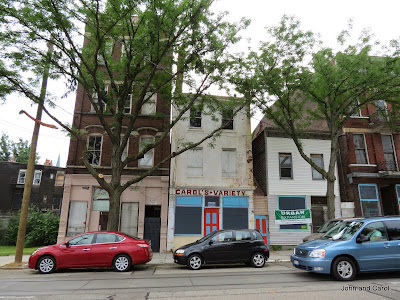 We did see a community garden in the neighborhood. 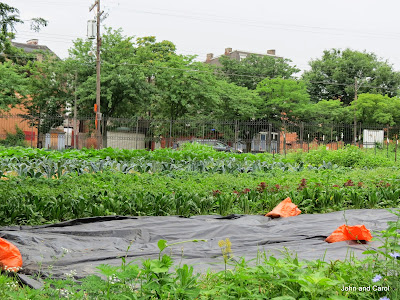 The neighborhood around the market was the only place in Cincinnati that wasn't really, really nice. Our GPS takes us on the fastest route, supposedly, and it took us through a number of residential neighborhoods during the past few days. The old houses, mainly built of brick, are well-maintained and beautiful. There are numerous parks and woods. Cincinnati is very hilly and large areas of forest are maintained for public use. On all our drives, we only saw one small piece of tagging.  Many cities, Denver and Phoenix included, can't say that.  Downtown, near the main library, we saw some really nice old buildings and murals. 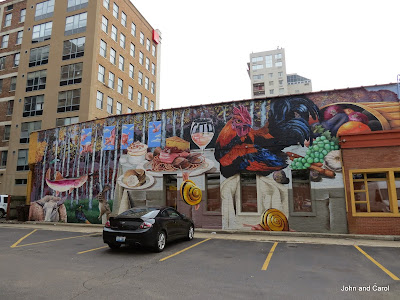 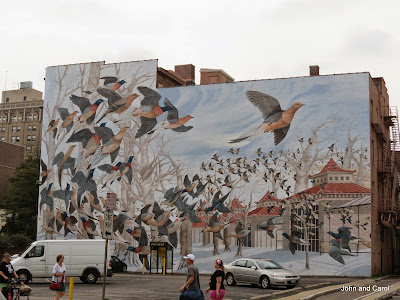 This is at the entry to the library. 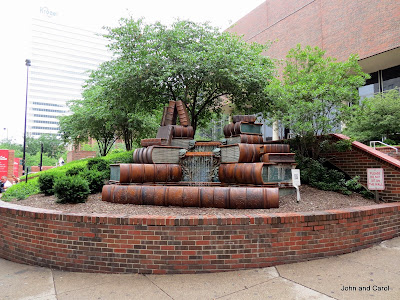 This is the Cincinnati City Hall. 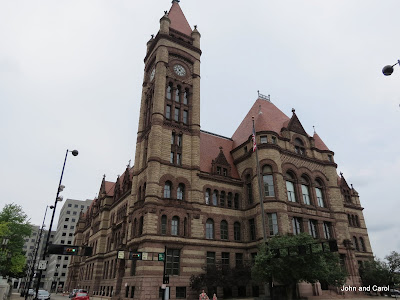 The Roman Catholic Cathedral of Saint Peter in Chains is an impressive building. 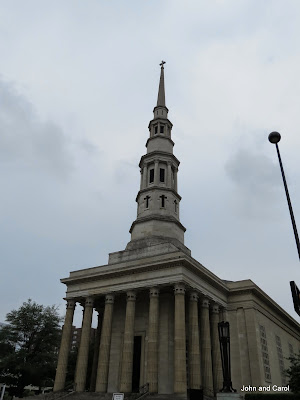 So is the Plum Street Jewish Temple. 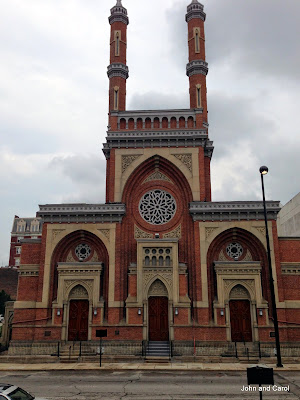