The main reason we came to Nashville was to celebrate my 71st birthday. Since I knew we were going to be in Tennessee at the time, I thought it would be a great way to celebrate. And it was. We aren't avid Country music fans, but I have heard about the Grand Ole Opry all my life. Just as the performance was about to begin, the main level of the auditorium was nearly full. 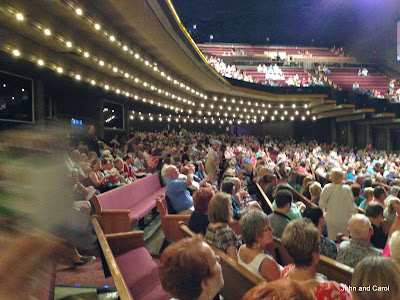 Each Opry performance includes a number of artists. Each half-hour segment has a host and two or three other performersl. Since most live performances don't allow phtographs, we only had our iPhone cameras with us. Thus, I don't have any photos of the performers, only of the jumbo-tron images of the show. Here is a shot of Riders In The Sky, the group that hosted the first half hour. 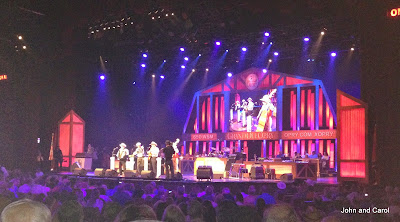 We had seen that group before. Some of the other performers we enjoyed but hadn't heard of before: Kathy Mattea, Jimmy C. Newman, Bobby Osborne & The Rocky Top X-Press, John Conlee, Ralph Stanly, Jean Shepard, Jim Ed Brown, Radney Foster, Connie Smith and Marty Gauthier. We enjoyed them all, but we didn't know of them. We also had never heard of comedian Henry Cho, but he was really funny. If you are real Country music fans, you probably do know these folks. I know many in the audience seemed to know them and their music. The people we did know were Ricky Skaggs and Marty Stuart. Even if we didn't know a lot of the entertainers, we heard some of the most talented guitar players and heard women with incredibly powerful and beautiful voices. It was great.

The Opry has been broadcast live on the radio for 85 years, since 1925. Since the Grand Ole Opry is a live radio broadcast, it has sponsors. And the ads are delivered from the podium next to the performers. Even if we hadn't heard of Boot Barn, Dollar General, Cracker Barrel or Humana, we would never forget them after hearing all those adds. Even the performers on stage had a hard time keeping a straight face during mention of Kotex U, available at Dollar General.

On our way into the opera house, we saw (and heard) this Minnie Pearl look-alike. 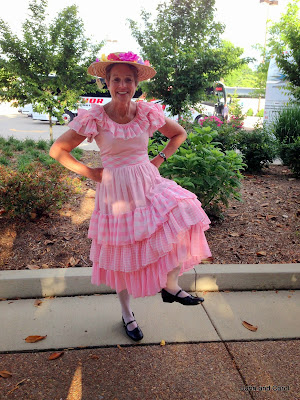 Earlier in the day, we had visited the Willie Nelson and Friends Museum and Store. What RVer doesn't hum or sing Willie's song, On the Road Again each time their wheels start rolling?  Did you know it was named the best Country song of 1980? 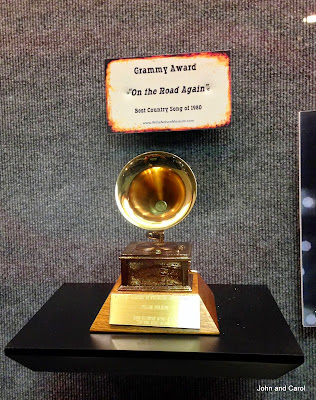 Willie was a lot better looking when he was younger. 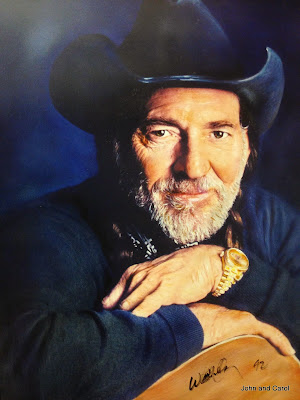 Did you know he was on the board of directors of a school of divinity? I wish I could remember what school it is. 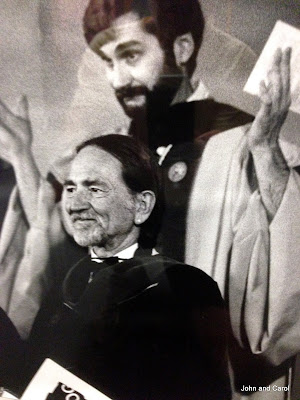 This is a display of only part of the gold and platinum albums he was received for his records. 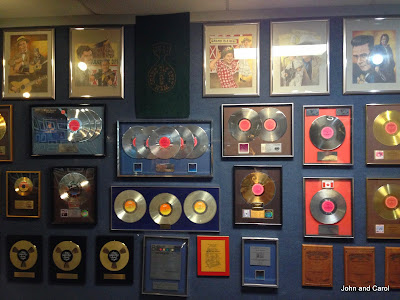 And did you know, Willie has been a runner for many years? This is one of the first pair of New Balance shoes he wore. His preference for that brand of shoes helped the company to become more well known. 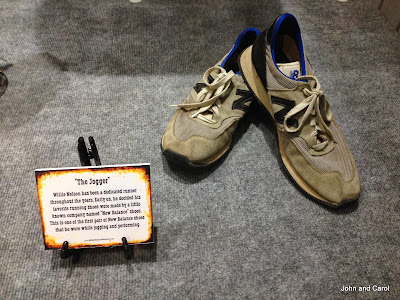 We took several photos of fancy costumes worn by other Country stars that are featured in the museum. I wondered if we would see clothes like this at the Opry performance. Except for what the Riders in the Sky and Marty Stuart wore, everything we saw onstage was pretty ordinary, with jeans the most popular attire.

This suit was worn by Lee Clayton. 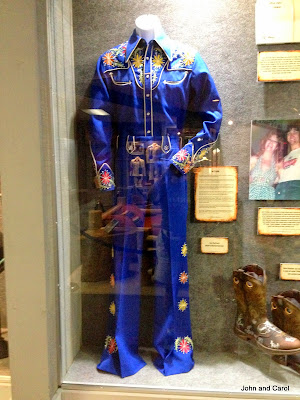 This beaded coat and braille edition of Playboy Magazine belonged to Ronnie Milsap, who was blind. 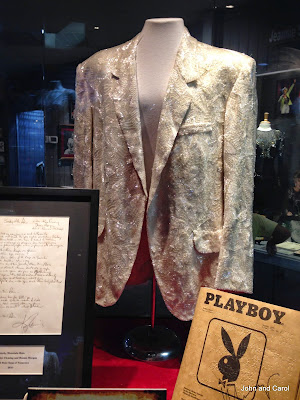 After visiting the museum, we walked next door to the Nashville Palace for a beer and basket of onion rings. There was a very good guitarist entertaining. (I don't know his name.) He sang pretty well, too. 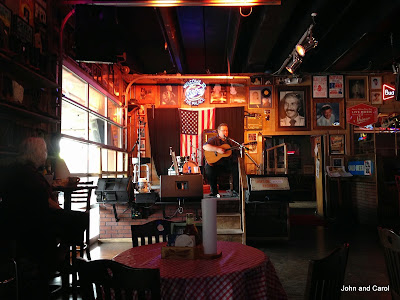 Out front, we saw this sign. I imagine, for the price of some food and/or alcohol, you can get a lot of free entertainment here in Music City. 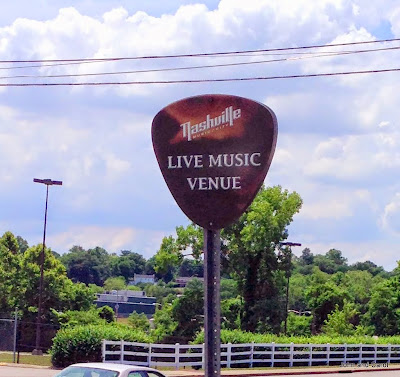 On the other side of Willie Nelson's museum was Cooters, showing items from the "Dukes of Hazzard" show. These vehicles were outside. 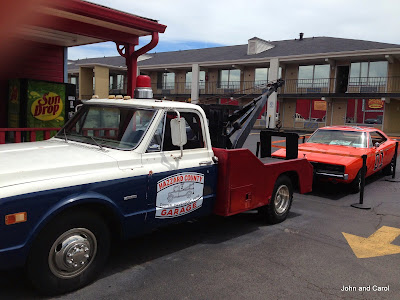 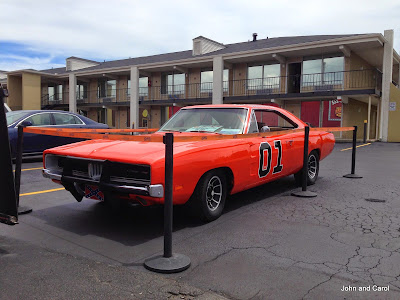 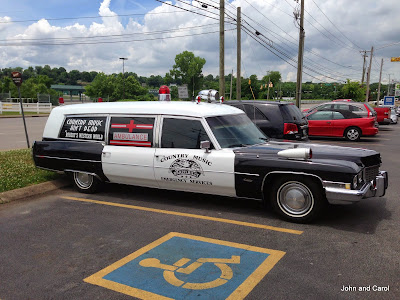