When we were in downtown Cincinnati, we noticed several pig statues. 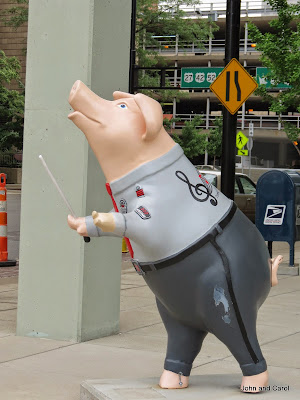 Why, you ask? According to my friend, Wikipedia:
The Big Pig Gig was one of many projects inspired by CowParade, which had been featured in Chicago the previous year. Laura Pulfer, a columnist at The Cincinnati Enquirer, wrote about seven-year-old Alexander Longi's proposal to Mayor Roxanne Qualls for an event similar to the one in Chicago.[2] The idea to build statues of pigs recalled Cincinnati's annual Flying Pig Marathon and the city's nickname of "Porkopolis". The nickname dates from the mid–19th century, when the Cincinnati meat packing industry led the country.[3

I once visited a slaughter house and don't ever want to do that again. But I did enjoy the pig statues.

Another trend in Cincinnati seems to be chili. We saw chili restaurants all over the place. And I don't mean the chain restaurant, Chilis. Again, I quote from Wikipedia:
Cincinnati chili (or "Cincinnati-style chili") is a regional style of chili con carne characterized by the use of seasonings such as cinnamon, cloves, allspice or chocolate. It is commonly served over spaghetti or as a hot dog sauce, and is normally of a thin, sauce-like consistency, unlike most chili con carne. While served in many regular restaurants, it is most often associated with several restaurant chains, such as Empress Chili, Skyline Chili, Gold Star Chili, Camp Washington Chili, Pleasant Ridge Chili, Blue Ash Chili, and Dixie Chili. Restaurant locations are found pervasively in greater Cincinnati with franchise locations also throughout Ohio and in Kentucky, Indiana, and Florida. Restaurants that feature Cincinnati chili are frequently called "chili parlors."

According to the Greater Cincinnati Convention and Visitors Bureau, Cincinnatians consume more than 2,000,000 lb (910,000 kg) of chili each year, topped by 850,000 lb (390,000 kg) of shredded cheddar cheese.[1] Each September, the city celebrates “Chilifest” at Yeatman's Cove on the Ohio River, with food and entertainment.[2]

While shopping the other day, I even saw a frozen meal called chili on spaghetti. Today, while fueling the truck, we saw a Skyline Chili restaurant and had to try it. This is what the container of chili looked like. It comes with a bag of shredded cheese and a bag of crackers that I would call oyster crackers. 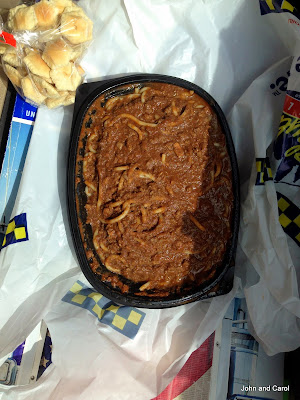 We added the cheese. 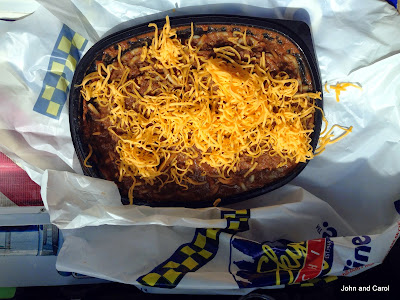 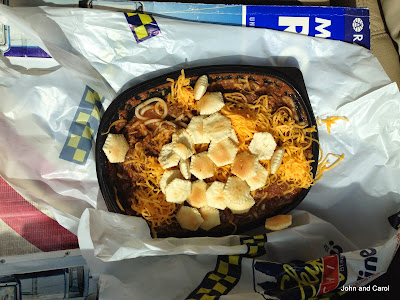 One dish was enough to satisfy both of us for lunch. The chili has a touch of hot flavor, no beans. It is served with spaghetti noodles. And we agreed, it is good. We are glad we tried this Cincinnati trademark.