Can you imagine staying in a place named Toad Suck? Well, that's where we are now. 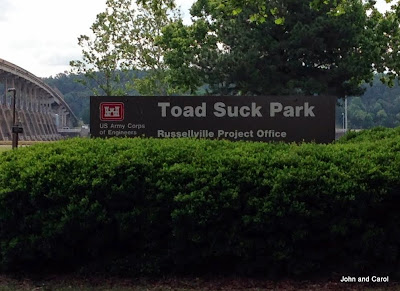 Despite the name, it's really a very pretty location, right on the Arkansas River within sight of the Toad Suck Ferry and Murray Locks and Dam.

This is our view from the back (driver's) side of the RV. 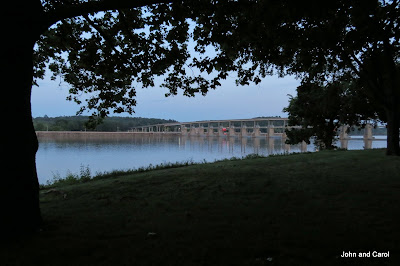 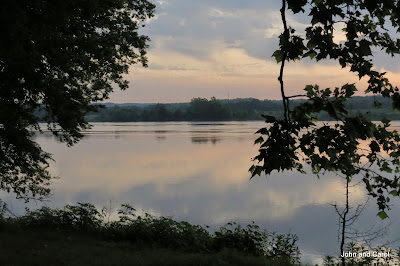 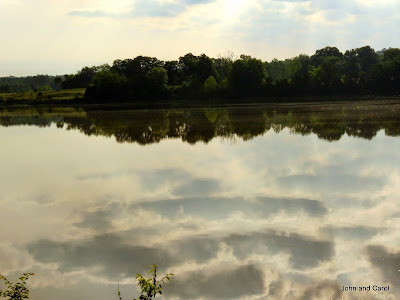 But why the name? The first river crossing here was in 1823, when a postal route to Hot Springs was established. A skiff large enough for just the operator and a horse and rider was propelled back and forth by a pole. Near the skiff crossing a tavern was located on the west side of the river sometime between 1830 and 1850. It was a favorite gathering place for steamboat roustabouts, passengers and local folks. Heavy drinking at the tavern caused a traveler to remark, "Those fellows suck at a bottle till they swell up like toads!" So the name of Toad Suck came into being and remains today. The ferry was replaced in 1956 by a highway bridge. Nearby Conway, Arkansas, celebrates Toad Suck Days in early May.

The headwaters of the Arkansas River are near Leadville in our home state of Colorado. Several membeers of our family live in Canon City, Colorado, on the Arkansas. The river flows through Colorado, Kansas, Oklahoma and Arkansas before emptying into the Mississippi in southeastern Arkansas.

The water has been smooth in the evening and early in the morning. Here, you can see the dam with the highway bridge above. The lock is on the far side of the river.

This morning, for the first time, we saw a tug boat and barges go through the lock. Here is the Brother Wilson tug, sitting in the lock, waiting for the water level to go down (or maybe the lower portion of the lock is filling with water) so the boat and barges can move below the dam. 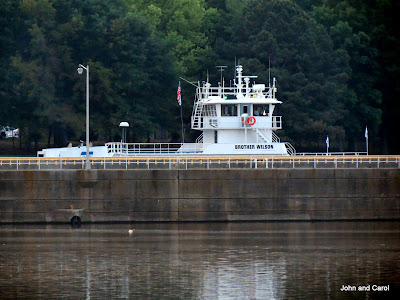 The lock rises or lowers 16 feet. When the tug is ready to push the barges forward, it starts putting out smoke. 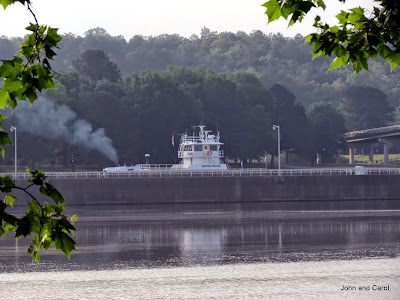 Here is is, going by the dam. 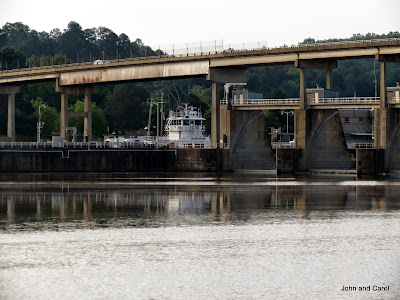 Here are the tug and barges emerging from the lock, at least 45 minutes after the previous photo was taken. 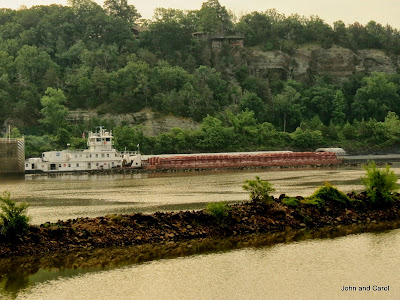 The whole process is very time consuming and must be very boring for the tugboat captain. I think it took way over an hour from the time we first saw the boat in the lock and the siren sounded, indicating the water level in the lock would be changing, to the time when the entire packet came out the other end.

Here is another view of the boat and barges.

We have stayed in a COE campground on the Mississippi near Davenport, Iowa, a couple of times and watched lots of barge traffic. But this is the first time to be right next to a lock and dam. It is very interesting.

The underside of the bridge is lined with mud swallow nests. Every time a vehicle crosses the bridge, a large number of cliff swallows fly out, then settle in again. 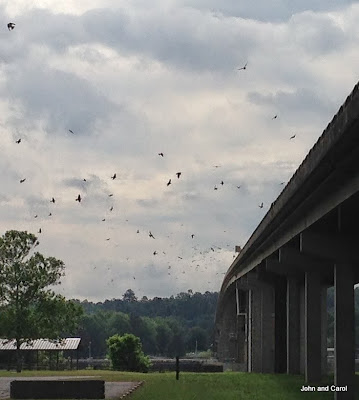 We are always looking for interesting or unusual RVs and vehicles as we travel. Look at this tow vehicle that is in the campground this week. They found a way to make it from parts of several trucks and a 5th wheel hitch. 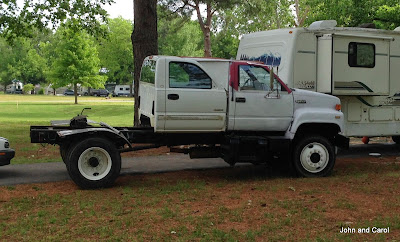