The shortest route from Canon City to Victor is driving up Phantom Canyon. Perhaps that is why the railroad carved out it's route through the canyon in 1894. It is not, however, the fastest route. The trip was just under 20 miles, creeping along the gravel road with lots of washboard sections. We climbed 4,000 feet in that 20 miles and it took us over 2 hours. The scenery made the trip worth it, but we said, "Never again."

My mother grew up in Victor and nearby Goldfield, graduating from high school there in 1932. I have been to Victor a number of times over the years. I think this is only the second time we have gone through Phantom Canyon. Victor and Goldfield are in what is called the Cripple Creek Mining District. Gold isn't found on level, soft ground unless it has traveled there by stream from higher altitudes. My grandfather was a gold miner in Victor.

The canyon walls are steep and rocky. 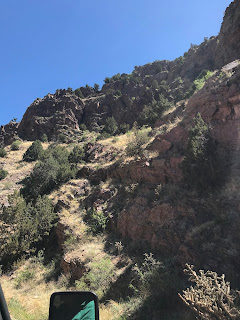 Since it is May, the trees have leafed out and the ground cover is green.  I was sitting in the back seat of the truck and caught a few pictures of the sideview mirror as well as the scenery. 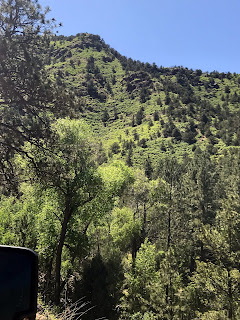 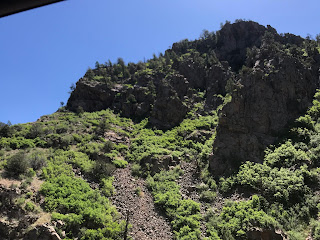 This one-way tunnel shows the hard rock the mountain is made of. The tunnel isn't long but if we had met another vehicle, someone would have had to back up.  Even on the open road, there often was not space to pass another car or truck. 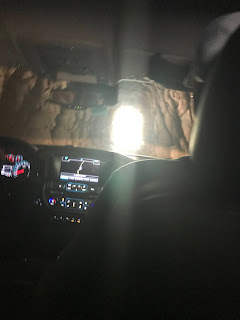 This is the way Colorado mountain sides should look, in my opinion.  Thankfully, there are many better roads to view them from. 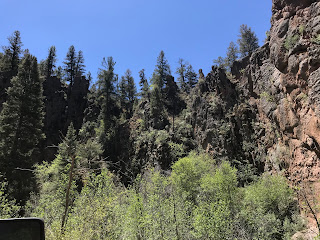 This was probably our best mountain excursion for the summer. Soon we will return to lower altitudes and warmer temperatures--at least until we fly to England.
Posted by John and Carol at 12:36 PM