In three days, after our check-in at the front gate, we only spoke to 1 person in the campground at the NRA Whittington Center outside Raton, New Mexico. We know it is early in the season. Other than wind we have had great weather in the past two weeks, especially for April and early May. But this is not a time we would have gone camping before we began traveling year-round in 2009. In fact, except for one year we didn't like to go out in Colorado until after Memorial Day. This year we want to be in the Denver area before Memorial Day, so we have seen a number of uncrowded campgrounds.

This pronghorn (antelope) spent quite a bit of time in the campground yesterday.  These animals are fairly common in New Mexico, Colorado and north, but we had never seen one up this close, especially in an area often frequented by humans.  Look closely and you will see how many empty sites there were in the campground. 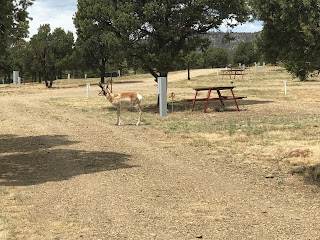 This is a close-up of the same pronghorn.  Not only were we able to get up close to the animal, last night as it was getting dark I was sitting in our trailer with the front door open.  I heard a sound and looked, only to discover a mule deer about 1 or 2 feet away from the door.  Amazing! 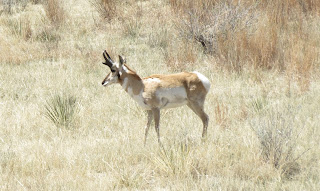 We had some great sunsets during our 3 nights at Whittington. 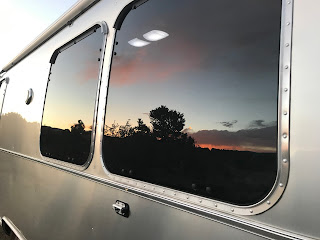 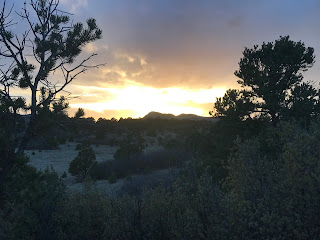 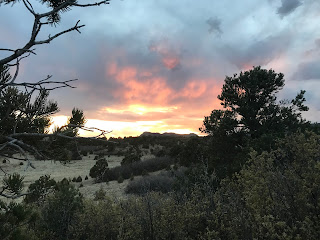 If you are looking for a quiet campground with full hookups and some really great sites, check out the Whittington Center, especially in early May. If you are into shooting, the center has numerous ranges for shotgun, rifle, black-powder and pistols. But if you aren't into shooting and aren't a member of the NRA, it is still a great place to stay. John is a member of NRA but we have never done any shooting there. But we enjoy camping in this place.
Posted by John and Carol at 7:32 PM