During our visit to Gallup we checked out the Navajo Code Talkers exhibit in the Chamber of Commerce building downtown. It is always so inspiring to learn more about the work these men did during World War II.

This statue stands in front of the building. 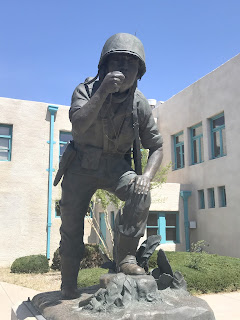 In 1940, before Pearl Harbor, the Navajo Tribal Council approved a resolution stating "there exists no purer concentration of Americanism than among the First Americans" therefore "we resolve that the Navajo Indians stand ready as they did in 1918 to aid and defend our government."

Philip Johnston, son of missionary parents, who had spent many years among the Navajo, proposed to the US Marine Corps that the Navajo language be used as the basis for a combat code. The Marines recruited 29 young Navajos, most still in high school, to enlist and develop the code. Several Navajo Code Talkers received their initial combat experience at Guadalcanal and by 1942 they were so successful the recruitment of 200 more Navajos to serve as code talkers was approved. The code talkers were never a separate fighting command but were usually assigned in pairs to division headquarters, battalions, regiments and companies. During the entire 3 years of war in the Pacific there was never an instance when a message was misquoted or inaccurately deciphered.

President Ronald Reagan honored the Code Talkers and below is a section of the commendatory letter.

By the end of the war, there were more American Indian enlistments in proportion to their numbers than any other racial group in the country.
Posted by John and Carol at 8:06 PM