The last two days, we have had good meals and great visits with couples we have know for nearly 50 years. Both had attended our 50th anniversary party, but we didn't have enough time to really talk to anyone that day.>
Monday, we met Dave and Kathy for lunch at P.F.Chang's. 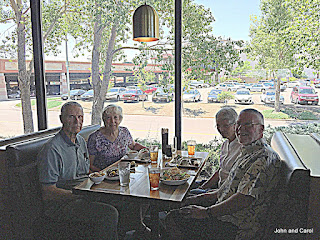 Kathy and I both had the lobster tacos. The menu said the tacos had lobster and jicama. I'm not sure if the small white taco shells were cooked jicama or if it was cut up and served with the lobster in the shell. Whatever, they were spicy and good. 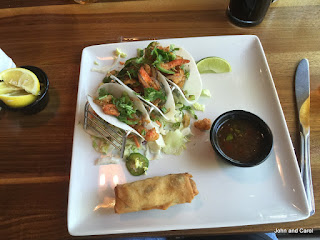 John had a chicken salad. I didn't get a picture of Dave's hot chicken dish. John said his was good and it was certainly more filling than my tacos. 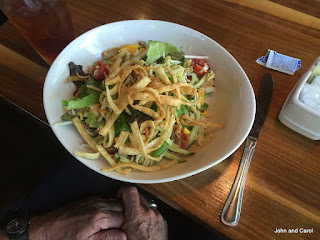 Today, we met Larry and Betty at Ophelia's Mexican Restaurant in Olde Town Arvada for a late breakfast. The location was chosen purely because we all like Mexican food and it was halfway between our campground in Aurora and their home in Longmont. It was an excellent choice, even if it was made purely for convenience. 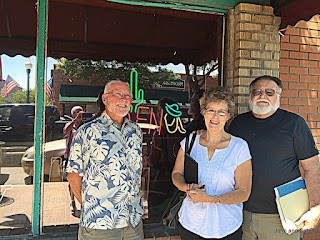 Everybody else had the breakfast burrito. 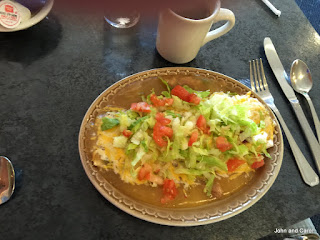 I had the green chili omelet. 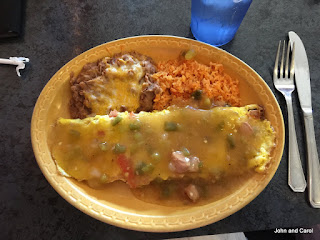 Both days, we talked until we were embarrassed to keep the table occupied for any longer. We had a great time with both couples.

Since we arrived in the Denver area, we have spent time with our son Eric and his family who live here; we spent 5 days with our son Doug and his daughters who we haven't seen for 4 years; we have celebrated our anniversary with over 40 family and friends; visited with some of those family members at John's sister Cindy's 30th anniversary; and met two couples for a meal.

For two people who spend most of their time alone together, rarely saying much more than a brief "howdy do" to the people we encounter, this has been a fun and intense time. We look forward to quiet time alone, time to regroup--and maybe time to eat a little less. We are grateful for all our family and friends. We also are grateful for the relationship we have shared for 50+ years and having time to pay attention to that again.