In Search of the Illusive...

Bird or dragon fly or butterfly.

We bought a new fanny pack to use when hiking. That gave us an excuse to walk through the forest--as in the sub-tropical thorn forest at Santa Ana NWR. A rare bird has been heard and seen on the Chachalaca Trail, the Tropical Parula. Someone spotted it and posted it on the internet. Birders from all over are flocking here to see it, as it is rare here in the Valley and seen nowhere else in the United States. When we worked last weekend, one woman came into the Visitor Center and said she had heard it and searched for it for an hour, but never saw it. Two days later, she came in and said, "I saw it! Give me a high five." Later that day, others came in reporting seeing the rare bird.

Obviously, we had to look for it ourselves. We looked up what sound it makes: "zzzzzz-up" according to The Audubon Society Field Guide to North American Birds. We heard it; we searched and searched with our binoculars; we didn't see it. Later we encountered several other birders--one couple who had seen it. Most had not.

Small warblers that hang out in the tops of trees, especially those that are rare in the Rio Grande Valley, are not easy to find. We did see lots of butterflies (Santa Ana has 251 species). And we saw lots of dragon flies (Santa Ana has 91 species of those). John took a photo of this Queen (I think) butterfly. 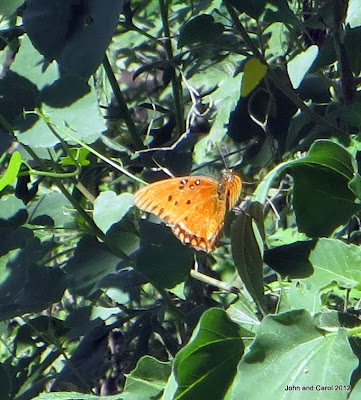 I spotted this Phaon Crescent (I think). 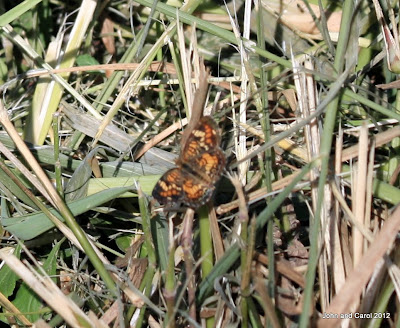 It is almost as difficult to take pictures of dragon flies as it is to find small warblers in the tree tops. None are worth sharing.

We climbed one of the viewing towers and saw this Western Kingbird. 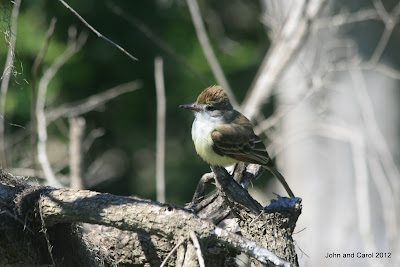 We are really enjoying being so close to nature here at Santa Ana. We hear birds singing when we wake up in the morning, all day, in the evening, and even at night (the Common Paraque sings or talks then). Today, during our walk, we saw butterflies everywhere--white, sulfur, orange, brown. They are as small as 0.5 inches, up to maybe 1.75 inches. Beautiful. We saw lots of dragon flies. We heard birds everywhere. It was a great walk.
Posted by John and Carol at 6:31 PM