We see such interesting RVs and combinations as we travel around the country. This is a 1946 Curtis Wright travel trailer. We thought it was an early Airstream, but learned differently. You can check out this wiki for more information about the RV and why it looks like an Airstream.

The tow vehicle is a 1954 (I think) Jeep. Both units have been restored. 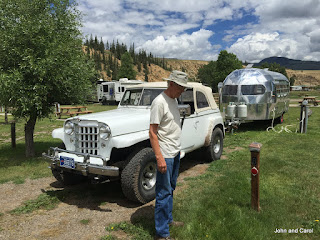 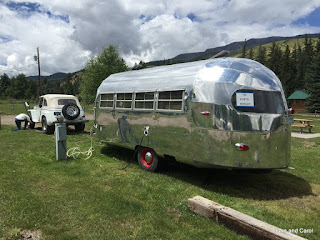 We have seen lots of vintage RVs over the years, but last night was a first. I saw an enormous motor home pull into the RV park and begin backing in an old, small toy hauler travel trailer! They unhooked the trailer and parked the motor home in the site next door. This morning, there was also a tent between the two RVs. There were six men and boys in the party. It wasn't long before the motor home pulled out and backed up to hitch onto the trailer. And off they went. 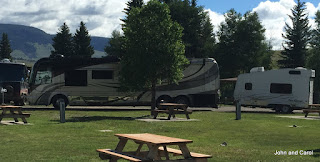 On land next to our resort there is an old empty building. It looks like a house but has a sign hanging above the front door. I finally went close enough to read the sign. It says, "Rio Vista Club." I looked on line and found a Rio Vista Golf Club. Since it is in California, I still have no clue what the club here was. 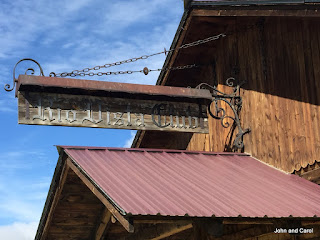 This resort has lots of chipmunks, golden mantled ground squirrels, blackbirds and mountain bluebirds (all of which refused to pose for pictures). We did see this small squirrel who stayed still long enough to be photographed. I think it thought we might not see it if it laid flat and didn't move. 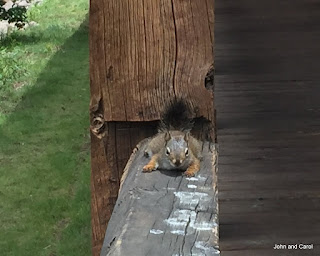 We have seen lots of rain while we have been here in Creede. In fact, the whole state has had more rain than normal this year. One day I took a slow motion photo of the rain near the Woodcarvers Rendezvous meeting facility. It will be interesting to see if the individual raindrops show up in this blog. 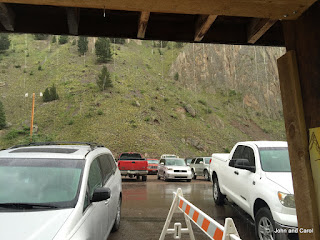