This is at least the fourth time we have visited Amish Country. The first time was near Lancaster, PA, many years ago. And this is our third time in northern Indiana. We thought it was about time we learned more about these Plain People, so we visited Menno-Hof, a museum telling the Mennonite and Amish story here in Shipshewana. What a wonderful museum. We spent at least 2 1/2 hours there. The story is told in video, interactive displays and informative illustrations. First off, I was impressed with the story of the building that houses the museum. 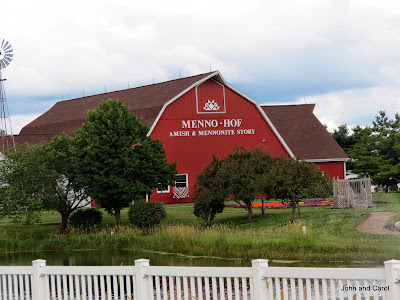 The Shipshewana Flea Market had been bringing many non-Amish to the town and they had a lot of questions about the Amish and Mennonite people and their way of life. The locals began telling that story, first at a booth in the flea market and later in a local church. So many people wanted to learn about this life that, in 1986, Menno-Hof (meaning homestead or farmstead) was built. This one sign tells the amazing story in just a few words. 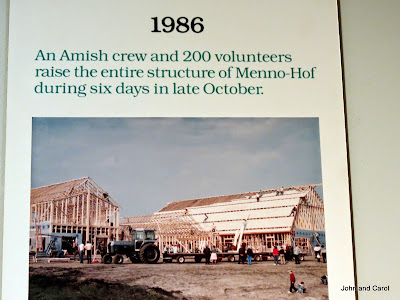 This is one of the wooden pegs that holds the framework together as it is being built. We learned that after all beams are in place, the structure is so strong the pegs could be pulled out and the building would still be solid. 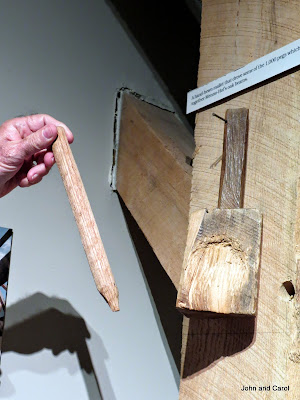 But the story of the Anabaptist movement that began in Europe in the 16th century is the central theme of the museum. That history was traced through persecutions in Germany to migration to Moravia, then on to North America in the late 17th century when William Penn, an English Quaker, launched an experiment to create a peaceful society in Pennsylvania. There Christians who were persecuted in Europe could live in peace and follow their own religious beliefs. In 1783 the first German Mennonites moved to Pennsylvania.

We learned about the development of the Mennonite and Amish communities, about the conflicts and divisions within them, and about the influence they had on American society and farming. Mennonites who had fled to Russia later came to North America, settling in Manitoba south to Kansas and introduced the hard winter wheat known as "Turkey Red" that strengthened the economies of both countries.

There were displays of the instruments of torture that had been used in Europe to punish the Anabaptists who didn't want to follow the established state churches. This tool was an Anabaptist Catcher, originally called a slave catcher. It was used to seize the wanted person from a crowd of people. 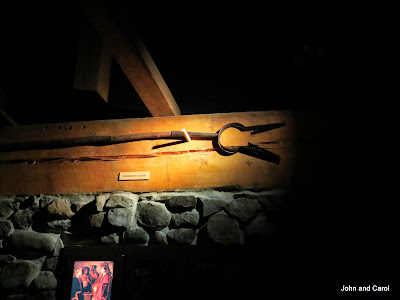 We saw what the conditions were like in the wooden sailing ships that brought these people to America in the 17th century. Passengers spent all their time below deck with bunks three high and a cooking fire nearby. The journey took up to 20 weeks to complete and many, especially children, died before they reached this continent. 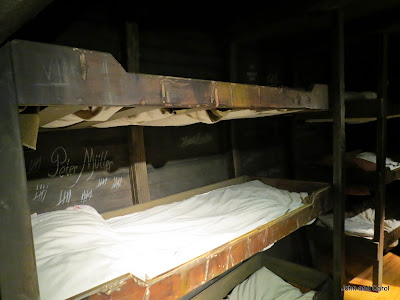 We saw examples of the Amish and Mennonite clothing used today. 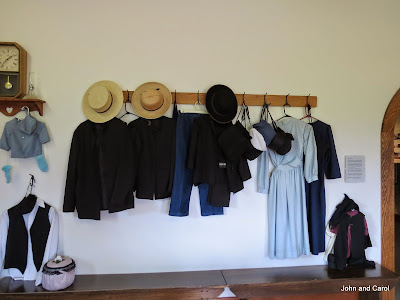 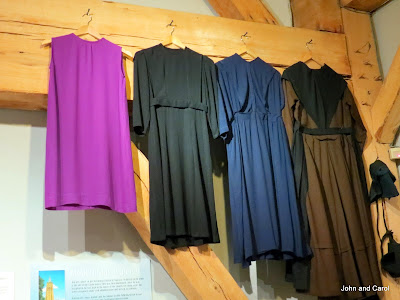 Every time we go out on the streets of Northern Indiana, we see how these plain people are an integral part of the society here, even as they keep themselves separate from the world to varying degrees with their simple lifestyle. 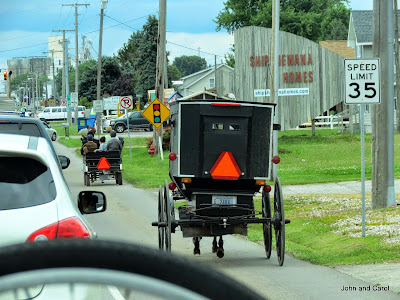