We are in Door County, Wisconsin, where 11 lighthouses on Green Bay and Lake Michigan provide a way to learn about the county's rich maritime history. Yesterday, we went driving to find three of those lighthouses. The trip took us on numerous country roads and we came on this crane and structure which blocked the road. 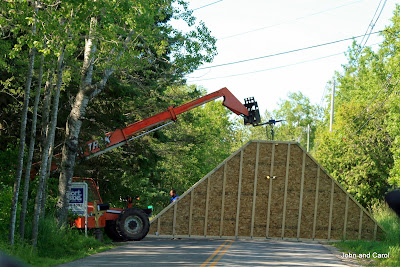 As they slowly moved the roof structure down a road on the left, they revealed a truck with a whole stack of similar structures. We were glad we could squeeze around before they finished moving the whole load, or we would have been there all morning. They were building a house down the side road.

Our first stop was at an active Coast guard station at the Lake Michigan end of the Ship Canal. 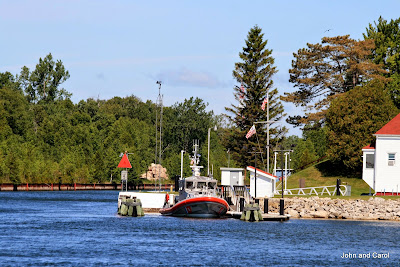 According to Wikipedia:
The Sturgeon Bay Ship Canal is a shipping canal connecting Sturgeon Bay on Green Bay with Lake Michigan, across the Door Peninsula, at the city of Sturgeon Bay, Wisconsin, United States.[1][2]
Boat passing eastward through the Sturgeon Bay Canal in stormy weather (September 2013).

The canal is approximately seven miles in length, and consists of two parts: a dredged portion of Sturgeon Bay, and a 1.3-mile canal dug through the eastern side of the Door Peninsula. This shorter portion was dug by a private group headed by then-president of Chicago and North Western Railway, William B. Ogden, between July 8, 1872 and the late fall of 1881. Although smaller craft began using the canal in 1880, it was not open for large-scale watercraft until 1890.

There we saw the Ship Canal Light. 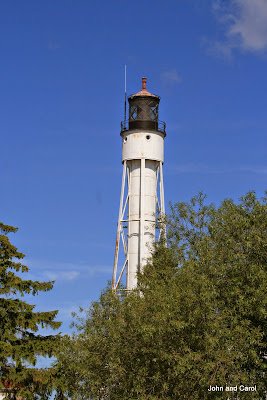 In 1881 work began on a light at the Lake Michigan end of the newly constructed ship canal, linking the town of Sturgeon Bay on Green Bay to Lake Michigan It was a white, open framed tower on the outer end of the north entrance pier. The focal plane of the sixth-order Fresnel lens in the lantern on the tower was 29' above the pier and 35' above the water. The light was white. In 1898 construction began on a double-walled steel tower, 78' high. The third-order Fresnel lens, with alternating red and white lights, was 107' above lake level.

Two fog signals were built in the 1880s and a light added at the entrance to the ship canal. In 1903 one fog signal and the light were consolidated in a building that is reached by an elevated walkway from the lighthouse. 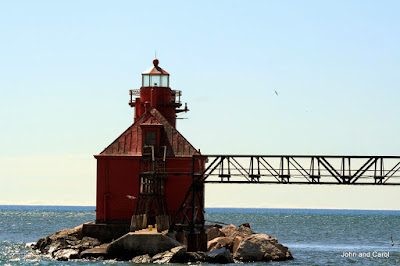 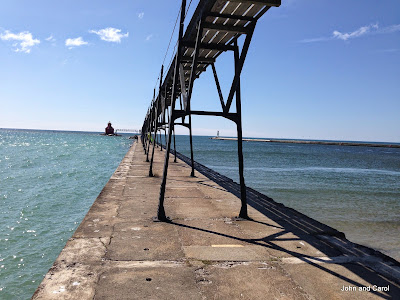 Next, we drove north on the peninsula to Baileys Harbor and the Cana Island Lighthouse.

After parking, we walked a short distance over a raised causeway to the island. 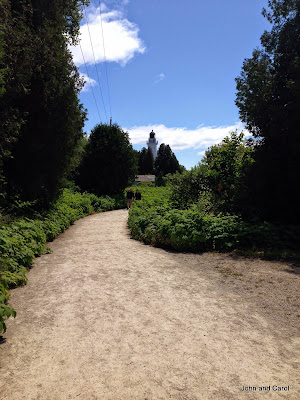 The lighthouse was built in 1869 of Milwaukee brick and was the tallest brick structure in Door County. In the early 1900s, the brick was enclosed in protective steel cladding. The third-order Fresnel lens has been lit continuously since it was first lit, making it one of the few US lighthouses whose original lens is functioning as an active navigational aid. 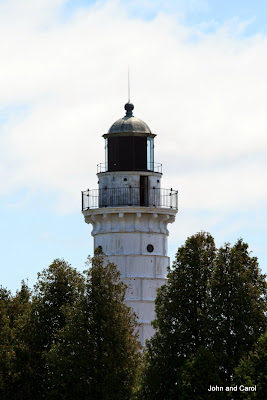 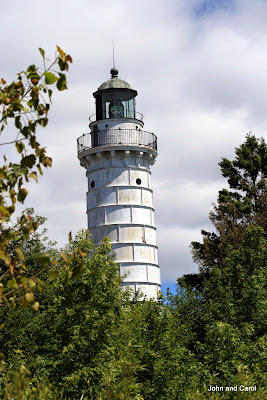 I choose to climb the 97 steps to the top of the lighthouse. (John stayed on solid ground.) The spiral staircase is a little daunting, but really pretty. 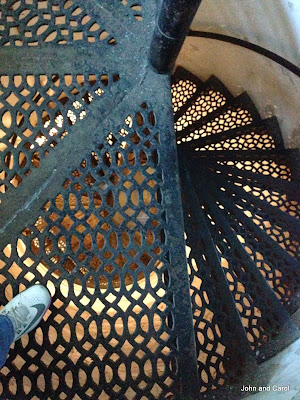 This is a view from one of the port-hole windows out to Lake Michigan. 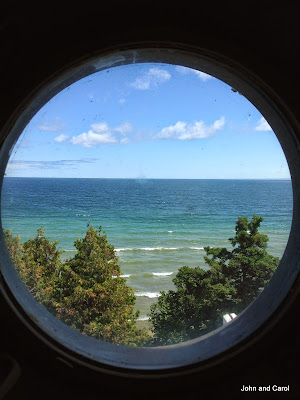 Looking up into the lens is interesting. It is illuminated by a single halogen light bulb that is about 2 1/2 inches long. There are three bulbs there and when one burns out, the mechanism automatically rotates to another bulb. 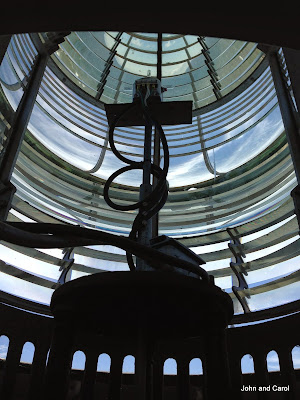 Here are the lighthouse grounds from the walkway around the lens. 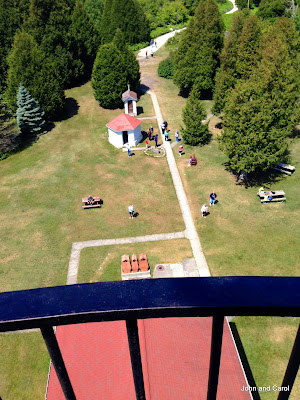 And a family on the lake-shore, seen from the other side of the walkway. 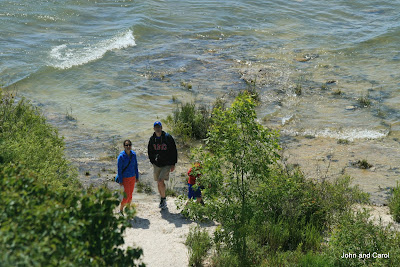 A stone wall surrounds the lighthouse grounds. There are picnic tables for visitors to use today. 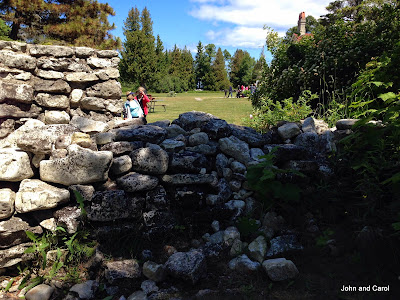 To learn more about the lighthouses of Door County, you can visit the Maritime Museum web site.