Finally, our weeks of waiting may be over on Tuesday. Hopefully, our new RV will be at the dealer's lot in Chanute, Kansas, and we can sign the papers, pay some, or rather a lot of money, and begin moving in. We have been so excited ever since we received the email yesterday giving us this tentative time table.

We have made good use of our time while waiting. In addition to doing genealogy research and watching the barbeque cook-off, we had the truck serviced and got our flu shots. These new trucks are great. It is no longer recommended that we change the oil every 3,000 miles and the oil life is about 7,500 miles. The truck's computer lets us know the oil life remaining and warns us when we need an oil change. Given the cost of an oil change in a diesel truck, changing the oil less often is great.

We have seen some interesting places as we moved from Indiana to Illinois and through Missouri and Kansas.

One morning we woke up to fog as the sun rose in Anderson, Indiana. We don't see fog very often in our travels. 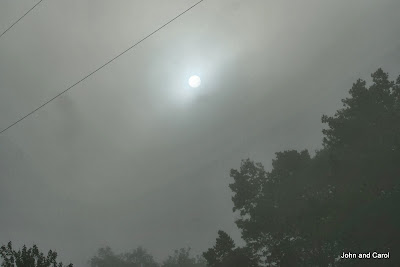 In Illinois, we stayed at a Corps of Engineers campground on Carlyle Lake. There were lots of sailboats in the marina. 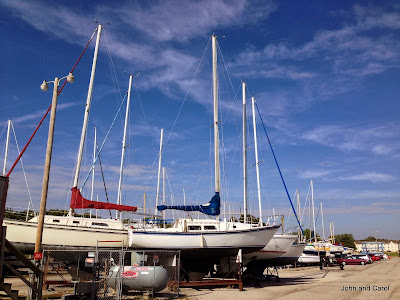 And we saw one set out across the lake. 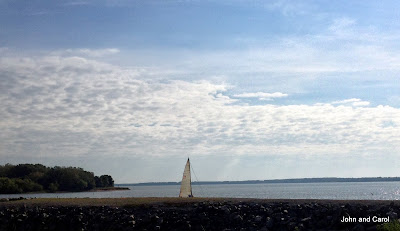 That was also where many of the campers had strung party lights. I lightened the photo so you could see the RVs as well as the lights. All I can do is ask, "WHY?" 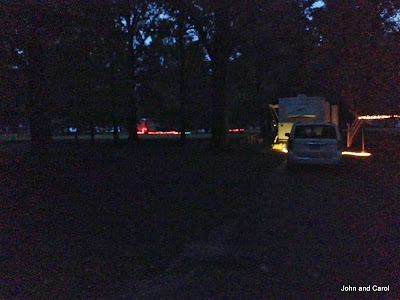 I think this was the dog walk in our Columbia, MO, campground. We don't have a dog, but we did enjoy the small landscaped area. 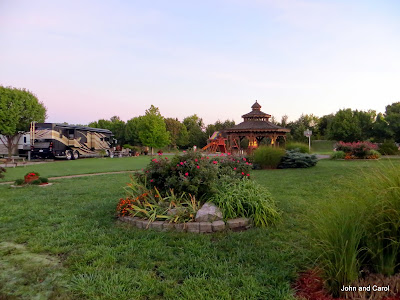 We visited Lecompton, Kansas, the first capital of the Kansas Territory. This building is Constitution Hall. In this building the first proposed constitution of Kansas was written, proposing that Kansas allow slavery when it became a state. It was approved by the people, but only because the election wasn't fair--many Missouri "ruffians" came across the state line to vote in favor of it and the anti-slavery members of the Kansas residents boycotted the balloting. 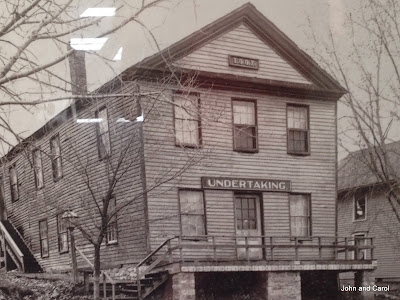 As you can see, after the capital was moved, the building was used for other purposes over the years before it was preserved as a historical building.

This is the historic one-room Lanesfield School in Kansas. This is the second school built here. The first was built in 1866 and this building was constructed nearby in 1903. Before either of these structures was built, the first school opened in the house belonging to John's great-great grandfather, William Gans. 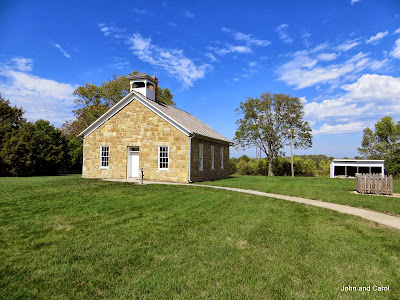 School children, especially 4th graders, visit the school on field trips. Cursive writing and penmanship are no longer taught most places. When the students visit the school, one of the activities is penmanship. The young man conducting the classes said it is the children's favorite activity. Here are the ink bottles they use. When did you last write with a fountain pen or quill pen? 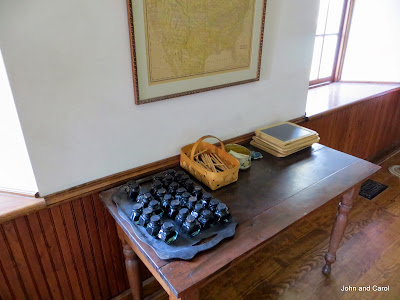 One day we stopped in a large mall in Kansas City. It has probably been six months since we were in a mall. What a change from small town and Walmart shopping. We even saw this carousel there. 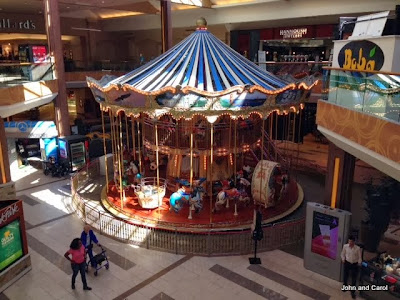