The TV, that is.  Five years ago, when we bought our last new 5th wheel trailer, we had a technician come out to where we were parked at Chatfield State Park to help us install our Dish Network satellite service in the RV.  He did get that working, sort of, to the main TV but not to the set in the bedroom.  When we got to Mesa, we had another technician come and he fixed it so we could see the Dish service on both TVs.  He also showed us how to change the connections and use the roof-top antenna.  We were never able to hook up to cable TV, which is available in most RV parks. And in the past year, the antenna signal also failed to work.

With this new RV, we have had excellent reception with both the antenna and cable.  However, the rig is wired to use a roof-top Direct TV satellite antenna and we have a Winegard carry-out Dish antenna. So, we called around Mesa until we found someone who would come to the RV and install the system for us. That wasn't easy.  Dish wanted to guide us over the phone to set it up ourselves.  I called the technician recommended by Dish and never received a call back.  The local Radio Shack couldn't recommend anyone.  Finally, we found someone willing to help us. Were we ever lucky!

Doug of Components Electronics in nearby Gilbert came.  They install home theater systems, among other things.  Doug is very thorough and a perfectionist.  He had never seen a system like ours.  That big TV I showed in a previous post is on an electronic lift and raises and lowers from a cabinet.  There is virtually no access to the back of the TV.  There is an electronic box in the cabinet where each component of the system is wired to so it communicates to the TV.  He knew what all the parts were, but it took him a while to figure how to integrate our Dish receiver into the system.

John explained the problems we had in the past and asked that he please not take apart anything that was already working.  It took him two hours, but he got everything working!  That means satellite, cable, antenna, CD player in the bedroom and Blue-ray player in the living room.  Wow!  We are delighted.  When we told him how hard it was to find someone to do this job, he said lots of people won't come out on a job that is less than $1,000.  As much as we like our TV, it certainly isn't worth that!

After Doug left, we headed to the Container Store in Scottsdale. Many of the cupboards in this new RV are large but don't have any shelves. We needed lots of stuff to make those spaces more useful and to keep items in place, especially when we travel. Look at what we came home with. 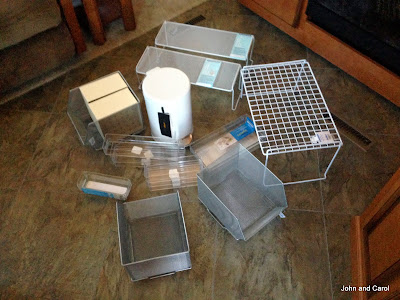 Once installed in several different places, our storage space is much more useful. Maybe in another week or two, we will finally feel like we have a place for everything and everything in its place. Right now, we are always looking around, asking where did I put the "________" last time (fill in the blank).
Posted by John and Carol at 8:06 PM