A Hell of a Place to Lose a Cow

That is what the rancher Mr. Bryce said in describing what is now known as Bryce Canyon National Park in Utah.  You can see why. 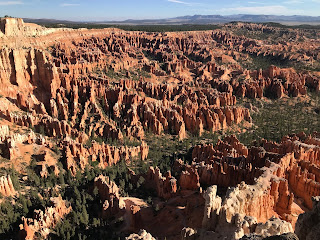 We spent 3 months volunteering at Bryce in 2005, the first year we spent being work campers.  We fell in love with the place.  It was fun to hike there twice last week.
Every bend in the trail offers new and beautiful views.   The first time we visited the park—I think in 2003 right after we both retired- we didn't know any better so we drove along the rim and looked at each of the viewpoints.   When we came to work we started hiking down the trails.  Our assignment required us to spend one half of each day helping on the visitor's desk and the other half hiking the trails if we wanted to.  If we wanted to!  We loved it.  Even though we had to hike separately a lot of the time, we each hiked all of the trails in the park, more than once.  We were very comfortable on the visitor desk helping people figure out what they could see in the amount of time they were there visiting.
This visit we took 2 good hikes.  One day we hiked on the most popular trail close to the visitor center.  The second day we drove to the highest point in the park, Bryce Point, and hiked down and back to the center and up through Navajo Loop.
It seems Bryce Canyon is a hell of a place to lose a new employee, too.  As we came down from Bryce Point, a young man who was clearly on the maintenance staff at the park came toward us and asked if we had seen a yellow machine being used on the trail we had come down.  We said no, we had seen nothing like that.  "Oh no," he said. "I took the wrong trail."  He hurried forward and up toward the rim.  About ¾ of a mile further we encountered a middle aged maintenance worker and asked  him if he was looking for a yellow machine.  "No,  I'm looking for a lost employee."  We explained we had passed him back a ways.  He hurried off in the same direction the young man had gone.  And we walked on, laughing.  There are lots of trails to search on foot for a missing person in Bryce.
Here are some of the views we saw along our hike. 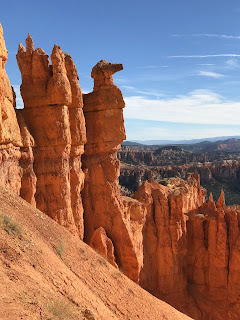 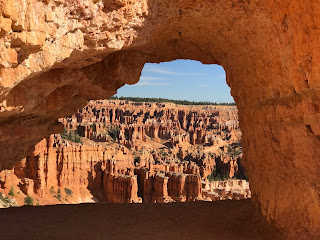