Monday afternoon we were picked up by Super Shuttle early—about 15 min before the scheduled pickup time—for the almost one-hour trip to Sky Harbor Airport.  We were early for our 7:45 pm flight but we wanted to have plenty of time to purchase British pound notes and have dinner before boarding.  We still had a wait, but it is easier to wait than to be worried about being late.  Finally, this big, huge 747 arrived and we were able to board for our 9 hour and 55 minute direct flight to London Heathrow. 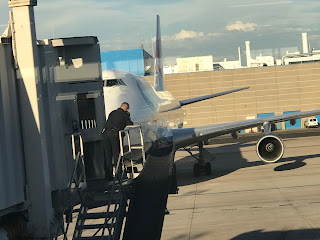 After our arrival we picked up our bags, stopped at the SIM shop to get UK SIM cards and UK phone numbers for our nearly 2 months in England.  Paying for the international plan on our Verizon plan would have been prohibitive.

We then boarded the Underground, or tube train, Piccadilly Line, to the Victoria Line, then it was one stop to Euston where we got off and quickly found our Hotel Wesley.  This is obviously a really hip, “in” neighborhood.  The streets and restaurants are full of younger (than us) men and women who just got off work and are drinking, eating and smoking. 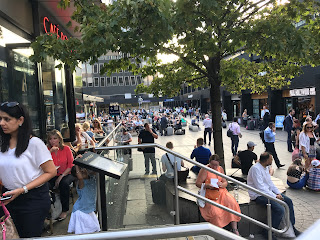 After dinner at Cafe Rouge, we quickly headed to bed.  I only slept 2 hours on the plane and John didn’t get much more than that.  We slept long and hard in our hotel bed.

This morning we had a continental breakfast in our hotel then headed to the tube station and the train   taking us near the British Library.  As we approached the library we saw a building with all sorts of red walls and spires.  We thought it might be a church but found it was the St. Pancras Hotel.  Pretty impressive. 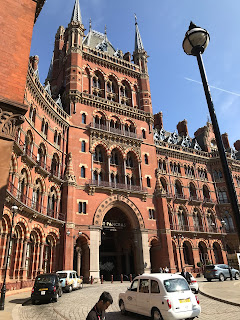 Along the way, we saw lines of black London taxis  and numerous red London 2-decker busses, as well as other tall tour busses..  The roads here are narrow and the busses and trucks are narrow and very tall.  After several years of watching vehicle clearance for 12’9” and 13’6” RVs, we are amazed at the many tall vehicles. 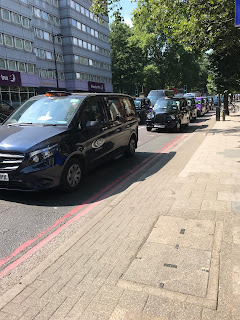 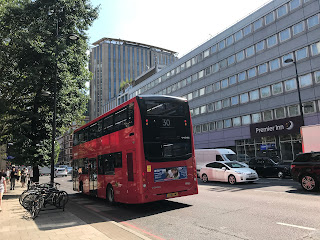 After an hour or two doing genealogy research at the museum, we went for a walk.  On our first trip to London 23 years ago, we had to keep awake after the long trip here while waiting for check-in time at our hotel.  On our walk that day we happened on Buckingham Palace and the Changing of the Guard ceremony.  We wanted to see that part of the city again today.  These are the gates to the palace. 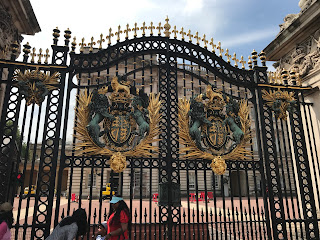 Here is a sentry of the Grenadier Guards outside of the palace. 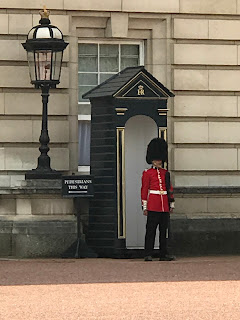 Across from the palace is the Queen Victoria Monument. 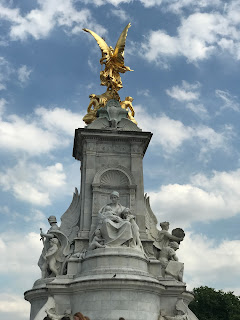 These beautiful fences and gates surround the monument, as well as the palace. 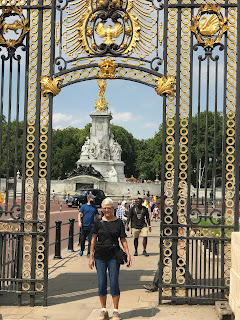 On a walk around St. James Park we happened on this local man, feeding the pigeons. 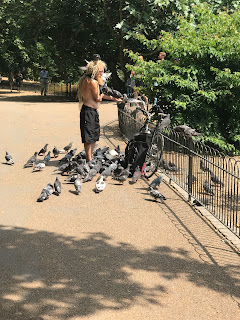 In this peaceful setting we could see the London Eye, a Ferris wheel along the Thames River. 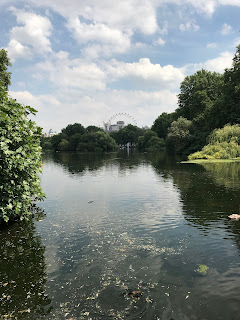