Well, almost. Today we toured Cadbury World here in Birmingham. If you have eaten a Cadbury egg at Easter time, you know how wonderful their chocolates are.

And they have always been made right here in Birmingham. Mr. Cadbury began making and selling first chocolate drinks and then fine chocolate candies in the late 1860s. At that time, drinking chocolate was as popular as drinking alcohol and it was an acceptable alternative to alcohol for the large Quaker population here. The Cadbury chocolates are still made here, but we didn’t tour the actual factory.

When we checked in for our tour, we were given 4 chocolate bars and, later, 2 more. 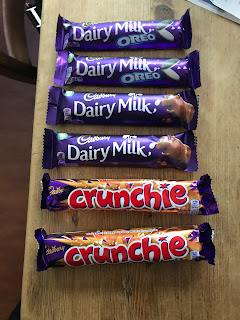 The story of Chocolate and Cadbury history was told through descriptive signs and (I think) holograms of the Cadbury family telling how the business developed. 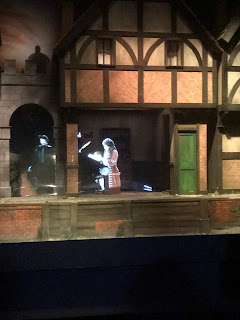 In the last room the tour allowed us to temper the chocolate—stir and move it around on a marble surface to cool it from 50 degrees to 28 degrees Celsius. (That is 122 down to 82 degrees Fahrenheit.) There were also squeeze bottles where people could write their names in chocolate. 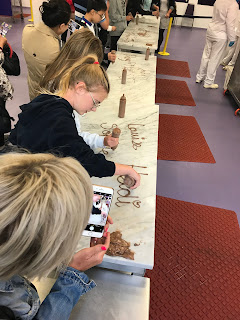 At the end, they gave each person a small paper cup with maybe 1 1/2 to 2 fluid ounces of milk chocolate and we could add other items. John added crushed biscuits, I chose salted carmel and cranberries. Absolutely delicious! 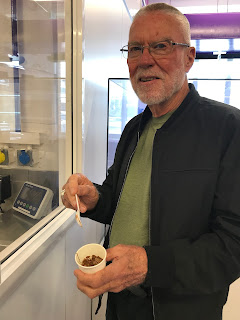 The Dairy Milk Oreo candy bar would be my absolute favorite. I wonder if it is sold in the US?
Posted by John and Carol at 7:57 AM