You need a ticket to tour the White House and you get those by contacting your local Representative or Senator.  In 1973, when I came to visit John who was attending the F.B.I. National Academy, a training program for local police officers, I got a ticket and was able to go on a White House tour.  John had never been inside the presidential home but we weren't able to take a tour this trip because I forgot how to get a ticket.  I am sure many other people are in the same boat because now there is a White House Visitor Center with lots of very good information about this iconic building.

There is this model of the White House and it's grounds. 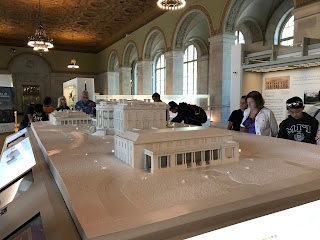 This is Hiawatha's boat, a center piece. First Lady Julia Grant acquired this item at the 1876 Philadelphia Centennial Exposition. 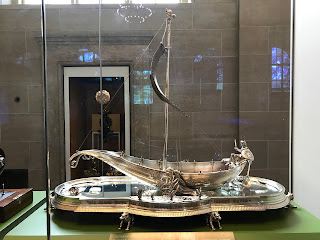 The center shows lots of pictures of presidential families really living in the White House and discusses the changes and improvements made over the years.

We have been to D.C. twice before and you were able to walk up to the iron fence that surrounds the White House.  It is a real shame that the threats of terrorism since 9/11 and resulted in these barricades keeping the public away from the building.   But it is so sad to see these barriers. 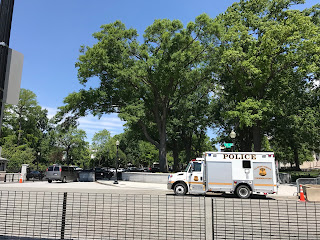 This is the view from the other side of the building.  At least you can see the White House and the grounds. 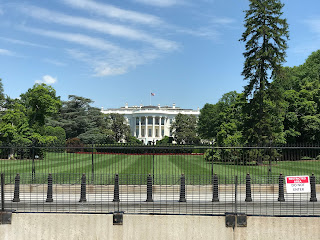 The crowd standing to get a look at the facility was impressive. 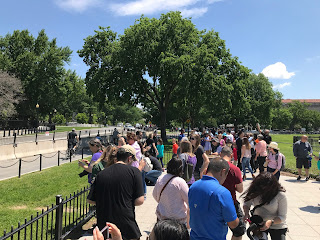 Over the weekend 394 names were added to the Fallen Police Officer Memorial and many police officers from the departments of the officers that had died in the line of duty were there.  These two motorcycle officers from the San Diego Police Department wanted to have a photo with the White House in the background.  They pulled into place then walked over to the people in the crowd shown above and asked them to take a picture with the officer's cell phone.  Cool! 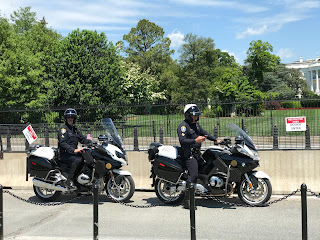