A port?  In Tulsa?  When we read about this museum we had to check it out.  The museum is small--essentially one room--but we learned a lot.

This life ring hangs at the museum, giving the name of the tug boat on display on the grounds. 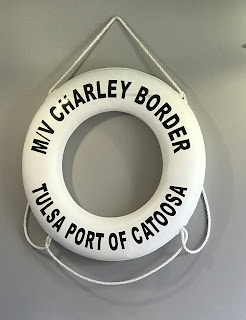 But how do the boats or barges needing a tug boat get to Tulsa, Oklahoma?  That is sort of a long story.  In 1943 an Arkansas River flood covered a 15-mile stretch  in Oklahoma from Muskogee to Fort Gibson.  By 1946 the Arkansas Basin Development Association had been created and the US Rivers and Harbors Act had passed by he US Congress.  Construction of the controlled waterway began in 1950 and was completed in 1970.

The project includes 18 locks and dams and 3 reservoirs along 455 miles of the Arkansas river from Catoosa, Oklahoma, to the Mississippi River in Arkansas.  Barges, which are much more energy efficient than either trains or trucks, carry freight to ports on the Arkansas River.  Today more than 100 industries are located along the Oklahoma section of this waterway, employing more than 4,000 people with a total payroll of  more than $1.4 million.  Catoosa is the largest and most inland port in the entire 25,000 mile inland waterway system.

As a side note, in 2014 we stayed in the Toad Suck Ferry COE campground along the waterway in Conway, Arkansas.  If you click on the photo below you can see that ferry location. 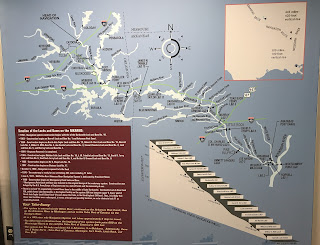 The rug on the floor of the museum shows the navigable rivers in the inland waterways of our country. 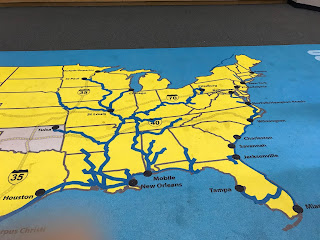 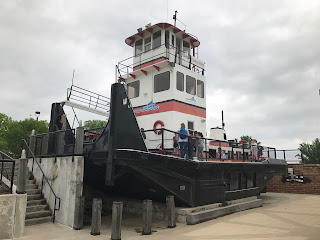 This is a picture of the propeller end of the Charley Border tug. 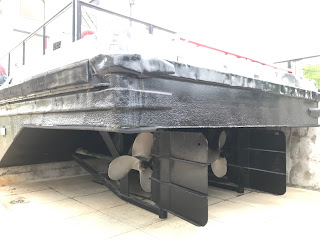 Late April is obviously field trip time in the local schools.  We have encountered groups of young people at the Oxley Nature Center, the Woody Guthrie Center and here at the Port of Catoosa. 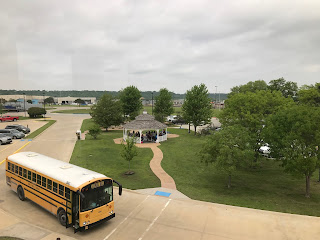 These young people really enjoyed being in the wheel house of the Charley Border. 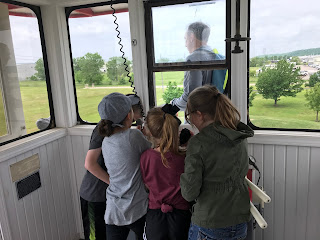