If you combine rain 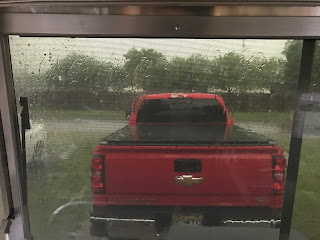 a lot of green 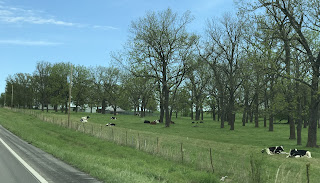 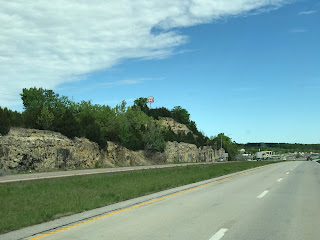 and many, many cows 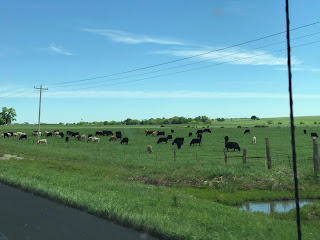 and throw in the giant Mississippi River and it tributaries 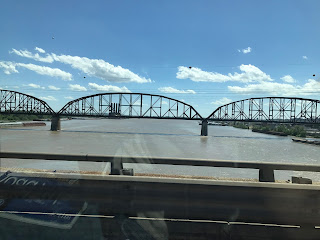 you will have a good idea what our trip across Missouri was like this week.

We have seen a lot of cold weather and cold rain over the past week or so. The wind and cold and rain began while we were in Tulsa. We cancelled our plans and reservations to go to Branson because of the threat of more rain and flooding in that area. The rain you see on the first photo above was falling Saturday in Tulsa.

Of course it takes a lot of rain to bring out all the green fields and leaves we saw as we crossed Missouri.  Coming from Colorado and spending our winters in Arizona, all the green is a delightful change.

We had no idea Missouri had so many cattle ranches.  The fields we passed as we drop east on I-44 were full of cows.  Maybe we were driving in Mooosouri!

The limestone hills and walls seen in this part of the country are so picturesque.  Of course the Missouri and Mississippi Rivers get most of their water from snow melt and rain.

We also saw a farm that had camels as we drove east.  Our GPS doesn't understand that Missouri names county roads with the letters of the alphabet.  When it told us to turn onto Missouri MM we were told to turn on "mo millimeter."  We really laughed at that.

We also saw a sign on the back of a septic tank pump-out truck that read, "Yesterday's Meals on Wheels."

We get most of our weather news from the internet, so we surprised when we saw on the local news while we were in Springfield, MO, that there was a lot of flooding east around St. Louis.  In fact I-44 was closed at Lebanon due to flooding.  When I call the Missouri Department of Transportation on Tuesday morning before leaving Springfield, it was suggested we drive north to I-70 and take that road in to St. Louis.  The detour added about 100 miles to our drive.  We are now just east of the state line and the Mississippi River in Cahokia, Illinois, for a few days.  It rained most of the day and will do so again tomorrow.  We hope we don't have to figure out too many more detours.  But the good news is we haven't been caught in rising water and have traveled safely.
Posted by John and Carol at 6:27 PM