Freedom of the Press

During my time in the School of Journalism  at the University of Colorado, where I got my degree in 1965, I gained a deep appreciation of the First Amendment to our constitution, "Congress shall make no law respecting an establishment of religion, or prohibiting the free exercise thereof; or abridging the freedom of speech, or of the press; or the right of the people peaceably to assemble, and to petition the Government for a redress of grievances."

Ever since I heard in  2008 about the new museum in Washington, D. C., the Newseum, I have wanted to visit it.  So it was center of our intention the first day there. 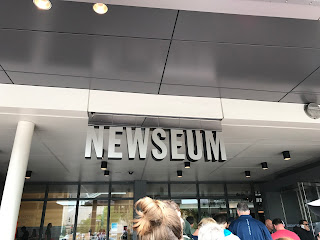 The exhibits include front pages from the day's newspapers in all 50 states, the Pulitzer Prize photograph winners, the history of publications of the news over 5 centuries, the role news reporting played in our country's Independence, in the struggle of civil rights and in the fall of the Berlin Wall.

A section of the Berlin Wall and one of the guard towers from the East German side are on exhibit.  The wall had kept citizens of East Germany from going to the West German side but it couldn't keep  radio, TV and newspaper stories of the better life and the freedom in the west from reaching people on the Communist side. 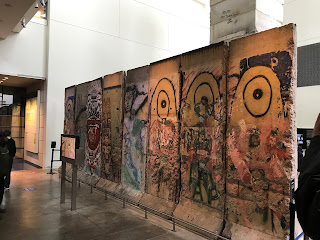 The sign below expresses the importance of a free press and the hope that journalists will maintain the standard of truth. 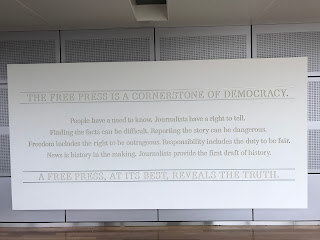 I hadn't realized that newspaper editors had been real celebrities during the 1890s.  There were even trading cards with their pictures, like we saw for sports heroes when I was growing upl 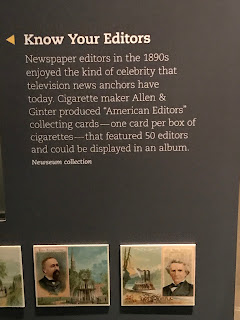 Of course, most of us in my generation are aware of the role the Washington Post and reporters Woodward and Bernstein played in the impeachment and resignation of President Richard Nixon.  I had two young children at that time.  I was glued to the TV for the Watergate hearings during those months.

I got a kick out of this poster from that era. 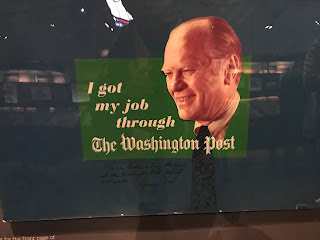 Nothing in the exhibits about attempts to stop the freedom of the press was of interest for a photograph but over the years individuals, courts and partisans have attempted to block that action.  So far, freedom has triumphed in this country, though in most parts of the world the concept is unknown.

This is an old printing press which would only print one side of one piece of paper with each operation.  The news sure spreads a lot faster in this age of the internet! 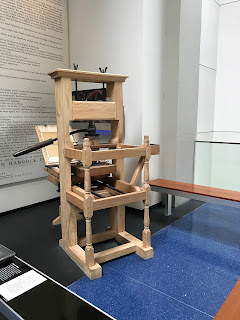 We both enjoyed the newseum and could have spent more time there.  In fact, the $20 ticket is good for two days.  But by the time we had toured the US Capitol and eaten lunch, we were getting tired and not willing to stay another few hours.  And we had other spots we wanted to visit on our second day in town, so I guess we will just have to come back another time.
Posted by John and Carol at 12:05 PM