We spend our winters in Arizona to avoid the snow and cold.  So, why did we get in our truck and drive north in January?  Seems there was something going on that was more important than avoiding winter weather.

A Court of Honor ceremony for our grandson, John Andrews II, was scheduled for that Saturday to formally award his Eagle Scout rank.  These are the ribbon and medal and patch that mark his ascending to the highest rank in the Boy Scouts.  We learned that only 4% of the members of the scouts reach this level.  We are so proud of him! 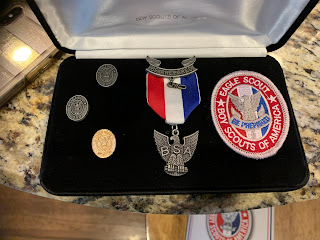 The prayer at the beginning of the service was offered by Grandpa John Andrews I. 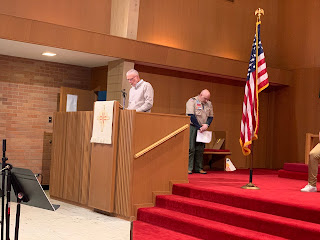 Lori Hardy, a neighbor as John was growing up, was one of the people talking about John's character, hard work and accomplishments in Scouts and his community. 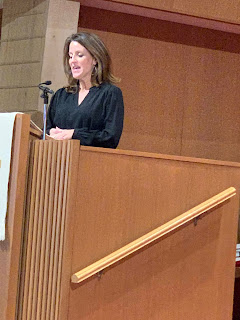 There was a live American Bald Eagle in the ceremony, as well.  It is seen here behind John, his parents Eric and Liz and sister Kylie. 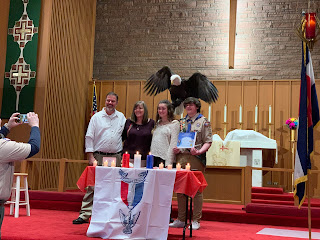 John reflected on his experiences as he worked his way through the Scout ranks. 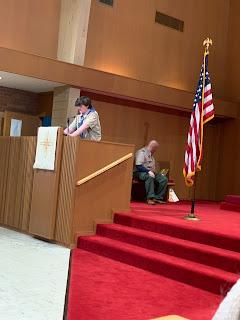 John and Kylie are shown here talking to their Aunt Ann Portarf.  She was a manager of Father Woody's, the homeless day shelter where John did his Eagle Project.  He supervised the constructions of storage shelves at the shelter, which had been established by his other grandpa, Jay Gould. 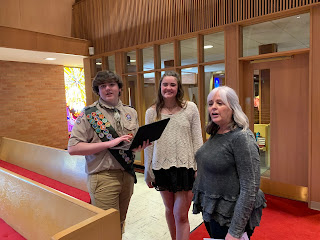 John is not the first Eagle Scout in our family.  Two of his cousins on his dad's side also attended--Craig Walker and David Gilbreth.  Craig issued the challenge and charge to the new Eagle Scout John Andrews. 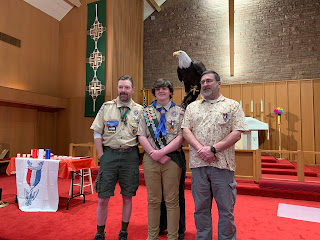 This cake was served with refreshments after the ceremony. 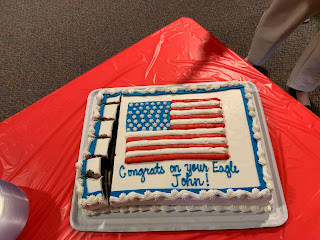 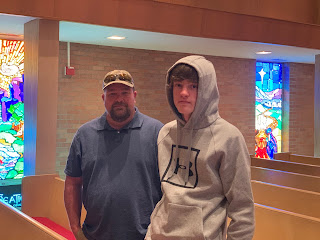 Posted by John and Carol at 1:36 PM No comments: