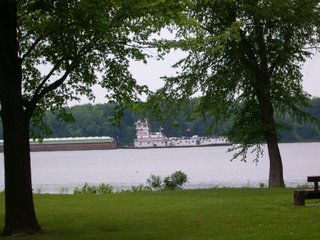 Here we are, parked maybe 75 feet from the Mississippi River between Muscatine, Iowa, and Rock Island, Illinois. Shady Creek Corps of Engineers Park has 50-amp electric hookups and large sites, many with concrete pads, and Silver Leaf Maple trees for shade. We can watch barges being pushed up and down river, as well as fishing dingys and speed boats pass by. It is a great place to spend Father’s Day weekend. And only $9 a night, since we have our National Golden Age Pass, which gives us half-price camping at all federal parks.

So far, June has been a time for family—research about family long dead and visiting with family members who are close and those we hardly know. We visited Lakin, the county seat of Kearny County in southwestern Kansas, where we learned about both scandal and success in the lives of John’s great grandparents. His great-grandmother had an affair with a nearby single homesteader that resulted in a new baby boy. A few years later, his great-grandfather was the first elected Registrar of Deeds in the county. And these grandparents separated or divorced.

Then we crossed Kansas to Olathe, where we found the graves of great, great- and great, great, great-grandparents and learned John’s family were truly Kansas pioneers, as well as “Gone to Texas Pioneers”. (Carol is from a Colorado pioneer family and probably Illinois pioneer family, as well.)

Next it was on to Boone, Iowa, for an Andrews-Whitmore family reunion. (Hazel Whitmore, Fred Andrews and Doug Andrews were sister and brothers and the parents, grandparents and great-grandparents of the 60 plus people present.) 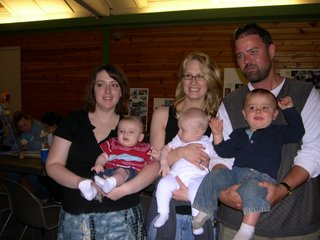 We spent Friday through Sunday renewing relationships and getting to know relatives we’d never met. Our son, Eric, his wife, Liz, and children, Kylie, 6, and John, 11 months, joined us there. Our two families stayed at beautiful Ledges State Park south of Boone. Many of those attending the reunion stayed at the Greater Des Moines “Y” Camp north of Boone. Others came from their nearby homes. 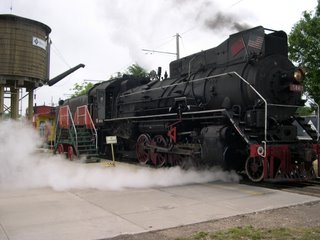 Saturday morning a large group braved record low temperatures (for June 10) to canoe on the Des Moines River. Saturday afternoon a large part of the Colorado Andrews contingent rode the Boone and Scenic Valley Railroad. The reunion crowd at the Y Camp waved as the trained passed our meeting hall there.

After the reunion, we crossed the Mississippi River to Mercer County, Illinois, where Carol’s family has lived at least since the 1860s. There we had lunch with a cousin and his wife who live nearby. We also did family research at the county courthouse and at the Essley Noble Museum. It was back to the Iowa side of the Mississippi for the weekend, to relax and watch the birds and boats on the river. As I write, there is a Great Blue Heron standing just off shore. We drove to Burlington, Iowa, to do more research on Carol’s family. Then we head east across Illinois to Onarga to learn more about John’s family. 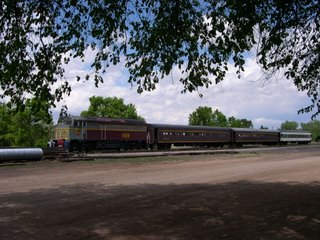 This week we were able to ride on the newest tourist railroad in Colorado during its first week of operation. The Rio Grand Scenic Railroad San Luis Express, operated jointly by the San Luis & Rio Grande Railroad and the Denver & Rio Grande Historical Foundation, is taking passengers over track between Antonito and La Veta in south-central Colorado. These tracks haven’t seen passenger trains for more than 50 years. What a thrill to go that route yesterday.

We boarded the train in Antonito. We were the only north-bound passengers at that point. Another couple had ridden down from Alamosa to ride the Cumbres and Toltec Scenic Railroad, which was departing from Antonito that day.

The train was pulled by Engine 459, owned by the San Luis and Rio Grand Railroad, a 3000 hp engine built for Amtrak and used to haul passengers for about 20 years before being converted for use as freight locomotives. The coaches—we had three on our train—were built by the Pullman Company in the 1950s as commuter cars for the Long Island Railroad.

Because the passenger load was so small—we picked up 37 more people in Alamosa—for a train that would carry 150 or more people, we had lots of time to talk with Train Manager Bob Shank and his brother, who are officers of the Denver & Rio Grande Historical Foundation, a private group that sponsors the passenger travel on these tracks today. Bob and his brother have had many years experience riding passenger trains in Colorado and use their love of trains to bring new opportunities to rail buffs in the state. 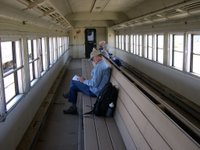 Our trip took us by the Great Sand Dunes National Park outside of Alamosa, gave great views of the San Luis Valley—a major agricultural area in Colorado—and over La Veta Pass. The original narrow gage tracks over La Veta Pass were built in 1878.

We saw remote mountain valleys that haven’t been accessible to tourists for five decades. Along the way there were elk and white tailed deer. From Fort Garland—a US Army fort built before the Civil War and now a Colorado Historical Society museum—to La Veta the scenery was superb. The pine and fir forest also had large stands of quaking Aspen, which will provide wonderful fall color.

In La Veta we had one and one-half hours for lunch and shopping. We had good food and excellent service at the LaVeta Inn, just down the road from the train depot. 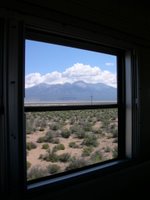 The train had been running late all day and by the time we returned to Alamosa we were nearly two hours late. That was complicated by the fact a freight train was blocking the tracks to Antonito because their crew had gone dead—meaning that had worked the maximum 12 hours allowed by federal regulations and had to stop working. This delay also meant our crew would go dead before the train could go to Antonito and return to Alamosa. So we sat in the station, talking with Bob, while a new crew was brought in from six miles away to move the freight train into Alamosa, then take our train down south to Antonito and back. We sure learned a lot about Colorado railroad history while we waited.

Arrival in Antonito was at 7:20 pm—way past the scheduled 5:15. But that is how it goes when you ride on a railroad during its first week of operation. We wouldn’t have missed it for the world and recommend it to all.
Posted by John and Carol at 7:44 PM No comments: