Bayfield, Colorado, is a small town with a population of 2,333 in 2010. Originally a hamlet serving the neighboring agriculture community, it is growing slowly, becoming a bedroom community suburb for nearby (18 miles) Durango. Natural gas production is also active in the area.

In the first quarter of the 20th century, my great grandparents Ady and William Doolin lived in Bayfield. In 1905 and 1908, when my maternal grandmother gave birth to her first two children, she traveled to Bayfield to give birth at her mother's house.

So, what is surprising about all of this? Really nothing except that when we visited Bayfield maybe 15 years ago, it was a very small town with no reason to linger. We came looking for where my great grandmother lived before her death in 1926. The house was all overgrown with weeds and vines. We haven't gone looking for it this time. But we had hoped to stay in both Pagosa Springs and Durango during this trip. Neither town had a decent campground with a vacancy. We picked one in Bayfield which had good ratings on rvparkreviews.com. When we arrived, we were pleasantly surprised.

This is the landscaping around the office of Riverside RV Park. 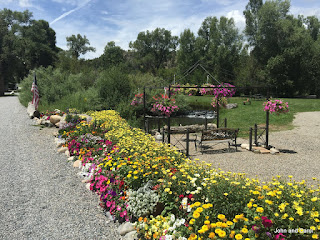 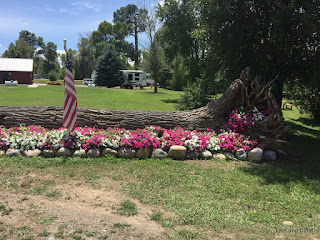 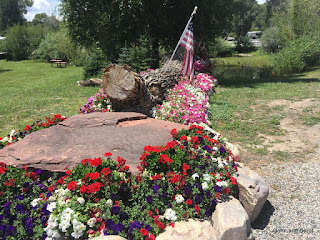 A stream runs through the park and has been directed into some ponds. Catch and release fishing is allowed. I don't know how successful the anglers have been. 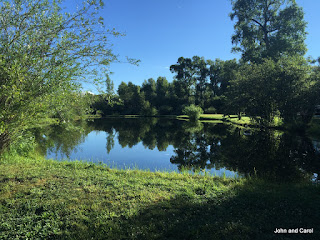 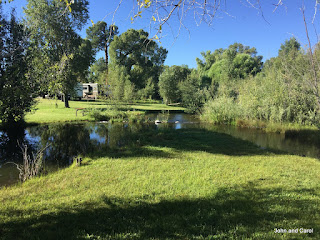 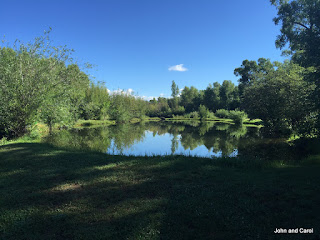 There is an alpaca next to one of the ponds. 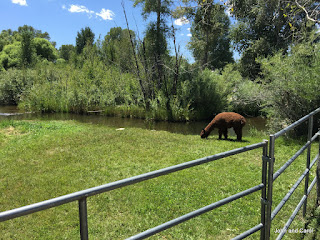 And talk about a surprise, we have seen ice cream trucks in other RV parks over the year, but this one is unique. And really cute. 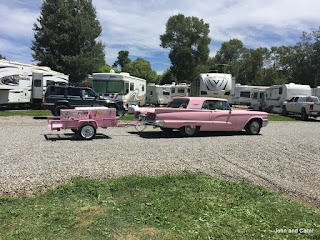 The park's wifi is fairly reliable, lots of the sites have grass out front and they are fairly well spaced. It is a great place to spend a week, resting and exploring both Pagosa Springs and Durango.
Posted by John and Carol at 12:15 PM