In August, we decided we needed a new laptop computer. The old one John had been using was having serious problems--not starting, not shutting down, etc. My laptop was still working well. Since John spend most of his online time using his iPad and I am usually on a computer, we decided I would get the new computer and John would use my old one when he needed to write in Word. We decided on a touch screen computer, since both of us have become accustomed to that. Then the saga began.

We were in Minnesota and went to the Walmart in Albert Lea, where we bought an HP laptop with a touch screen. Our last four or more computers have been HPs, so we expected another good experience. It worked fine for a week, but then quit. So, we returned it to the Rapid City, SD, Walmart, then bought a Dell touch screen model at Best Buy. Before returning the computer, I had done some online research and Dell had very good reviews. The day we bought it, as I was doing the initial setup, the touch screen stopped responding. So, back we went to Rapid City and Best Buy. This time, we bought a Lenovo Ultrabook. I had to ask, who makes the Lenovo? It is an IBM product, I was told. 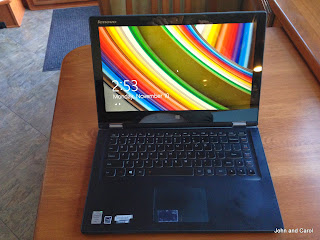 This computer is small. It starts up extremely fast--no waiting for everything to load. On the whole, I am very pleased.

I do have a few issues, in case you are looking at an Ultrabook. You will notice the scotch tape on the left part of the touch pad. When I am in low light, I can't see the line that separates the left and right buttons so the tape helps me do it by touch. Also, one reason the computer is so small and light is because it doesn't have a CD drive and the hard drive isn't really large enough for all my photos. So, I have an external CD drive and an external hard drive. 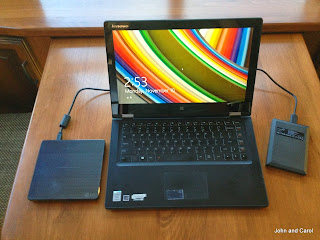 The Ultrabook is a cross between a tablet and a computer, so I can fold the screen 180 degrees and use it like I do the iPad, or I can put it in the tent shape and have it stand up on the counter when I am following a recipe saved on the device. I think I have the best of both worlds.

A couple of other bits and pieces of our last few days.

There was a beautiful full moon the other evening. 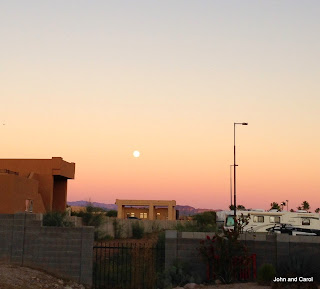 We bought a couple of bookcases for the bedroom, as well as some baskets for storage on what is called a plant shelf above the closet. Look how well the painted twigs on the sides of the bookcases pick up the colors of our new bedspread. 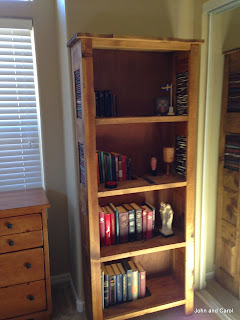 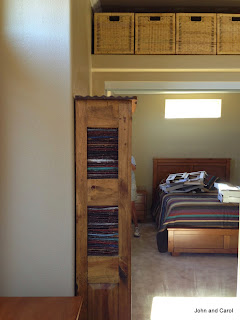 Saturday we attended a CPR/first aid certification class at our church, taught by members of the Chandler Fire Department. Scott and Nate were the instructors. When you spend most of your life around people of our age, you never know when someone might stop breathing! 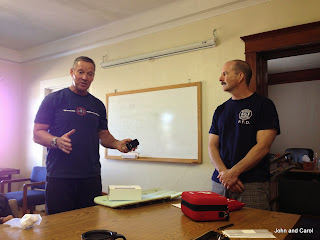