We were up and out early Saturday morning, headed for south central Phoenix to help on a Habitat for Humanity construction project. We found three homes being built on the same cul-de-sac. Volunteers from Lutheran churches were working on one, student volunteers from Arizona State University were at another, and ours had volunteers from the St. Patrick Catholic Faith Community and the Episcopal Habitat Coalition. 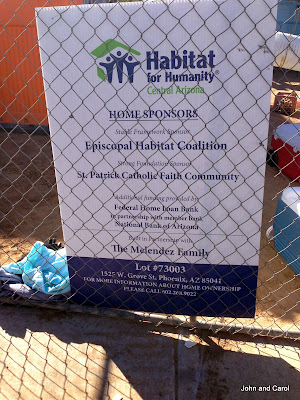 We have heard about Habitat for Humanity for years, but this is the first time we have worked on one of their projects. On this build, at least, some of the work is done by paid crews, some Habitat staff members direct the volunteers, and some volunteers come every weekend, not just when a church or group they are part of is signed up to work. 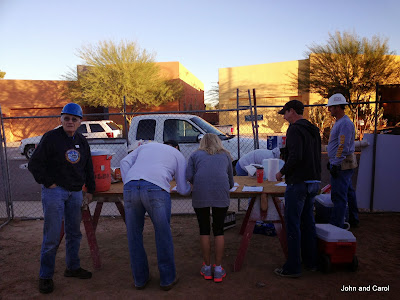 Between 7 and 7:30 am, each volunteer signed in and filled out waivers before the sun even fully reached the yard. The site host then called us all together and told us a little about the day's tasks. He then pointed out that Habitat for Humanity is a Christian organization and asked someone to lead a prayer. I knew about the faith connection, but was impressed with beginning the work day with a prayer.

While paid workers attached insulation around the exterior, followed by wire to support a stucco finish, the volunteers were doing blocking. John and I had no idea what that meant. We walked to a storage shed and returned with ladders and each person had a hammer and nails. We quickly learned that blocking means putting blocks of 2 X 4 lumber along studs so sheet rock can be nailed in place. This is necessary when roof joists and walls studs don't come together to support the sheet rock. (I hope I explained that correctly.) 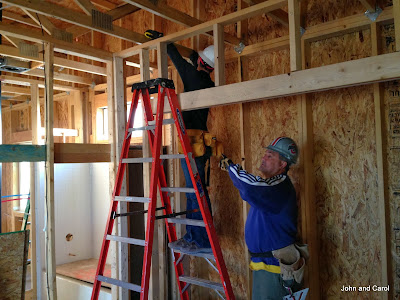 followed by pounding nails, attaching the blocks between joists. 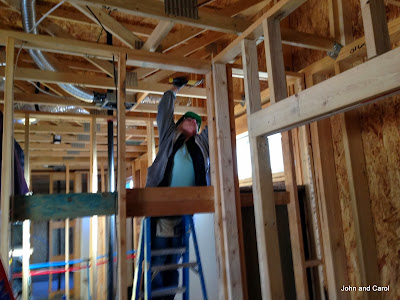 Since there were more volunteers than ladders, John and I spent a lot of time as go-fers, taking measurements to the man operating the saw, then returning with properly-sized blocks. Later we carried unused lumber to another construction site and trash to the dumpster. If you look closely, you can see two blocks under John's left arm. 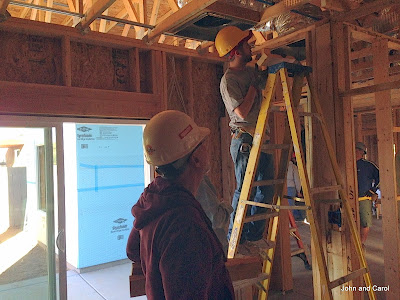 I think I partially pounded in two nails--I don't hit them hard enough or straight enough to complete that task--and John hammered in 13 or 14 nails. We did what we could and saved other volunteers a lot of steps.

When our work was about done, sometime before 11 am, Andrea and Connie put out lunch fixings and we all had something to eat before going our separate ways. 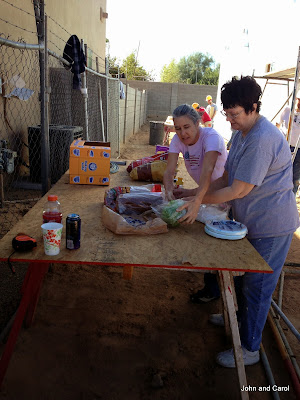 The woman who will be living in the home we worked on was at the build site, helping with the project. Here is a link to information about how people qualify for a Habitat for Humanity house. I found it very interesting and am impressed with the requirements.
Posted by John and Carol at 8:03 PM