What Else Goes On Here?

Our main responsibility is cleaning cabins here at Mueller State Park. So, what do the other people in maintenance do with their time? From 10 to 11 each morning, they clean the shower house. There are four showers on each side (men's and women's), as well as four toilet stalls in each. The time is the same each day so campers know when the facilities won't be available. It would be nice if they observed those hours, but as anyone who has worked in a park knows, campers often push the limits.

Another daily task is to clean each of the vault toilets. We have been impressed that this is done daily. In many parks, I am sure it is a weekly task, at best. Our first couple of weeks, we helped with this job, but haven't done it since then. During July new plastic toilets were installed in each building.

We caught John and Randy cleaning vaults one day. 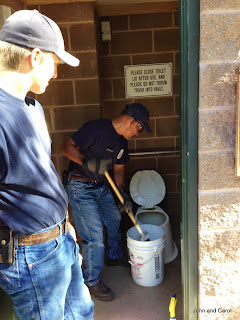 John is retired from the US Navy, where he became proficient spray-painting metal surfaces. He took on the task of scraping and painting the metal garage doors at the maintenance building. After all the old paint was scraped off, he suited up to keep the paint off his clothes. 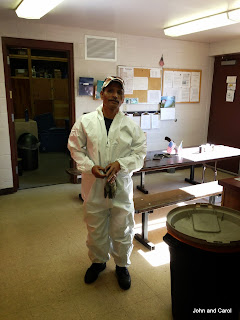 Now he is ready to do the painting. 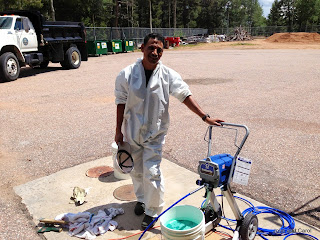 And here he is, admiring the completed job. Don't the doors look good? 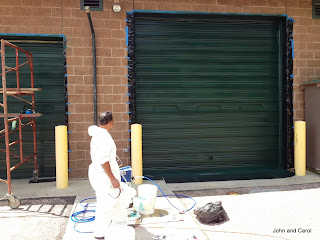 With 132 campsites, there is a lot of work in the campground area. A couple of weeks ago, the crew did some improvements in the Turkey Meadows walk-in camp loop.

Dan was supervising when we first went to check out what they were doing. We could hear the tractor backing up and went to see what was going on. 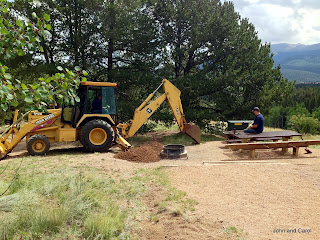 Jeff was using the tractor to pull out a tree stump and removed railroad ties that outlined the tent sites. They were expanding those sites by removing those tent area borders and leveling the surrounding ground. 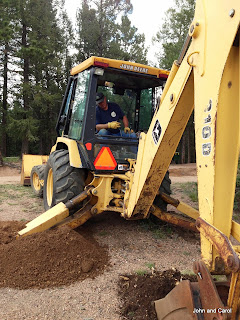 Dan and John were using a very large hand-help electric saw to cut some of the railroad ties to shore up the edges of the camp sites. 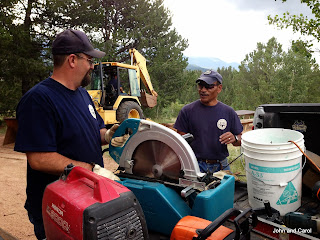 Randy, who is still in high school, is a talented welder and he has built a rack to store signs in one of the garages and a framework for the new sign at the park entrance. He also helped put together a trailer for back country fire fighting equipment. Sorry, no photos.