Yesterday the sun came out and we decided to go to the Apple Festival in Nappanee, a small town about 40 miles from here.  Now in its 38th year, the festival attracted 85,000 visitors last year and is one of the largest festivals in Indiana.  More about the festival in a bit.  On the way there, we stopped at E & S Sales, a bulk food store in Shipshewana.  The store is decorated with old toys and farm implements.  (You can click on the picture to see more detail.) 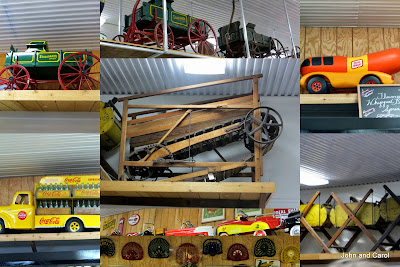 The store caters to both the local Amish and their English neighbors--anyone who is not Amish.  Most of the food was sold in large quantities and is often packaged in plastic bags, rather then cans or boxes.  This shows just a few examples of what they have for sale.  Fifty pounds of potatoes, anyone? Or some anise stars? 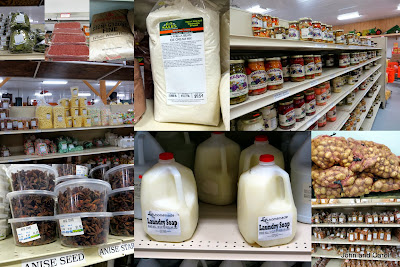 When we arrived at the apple festival, we were able to see the last part of the parade. There were old tractors and horse-drawn wagons.

There was a tractor pulling a steam-driven calliope. 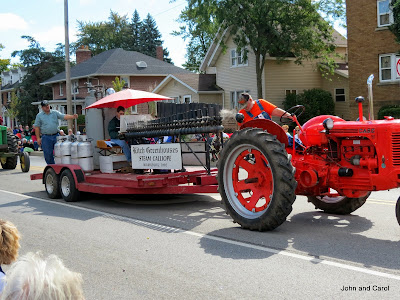 I'm guessing this machine was for harvesting corn. Anyone know for sure? 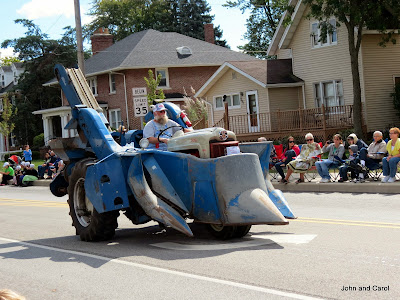 Since we used to own a funeral home, this matched pair of black horses and hearse was our favorite. 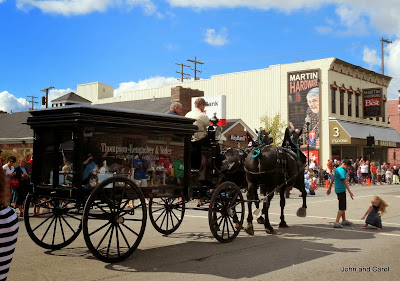 And this was clearly the cutest entry we saw. 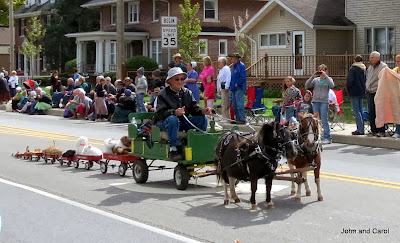 Miller Farms was selling mums. They are obviously at their peak right now. 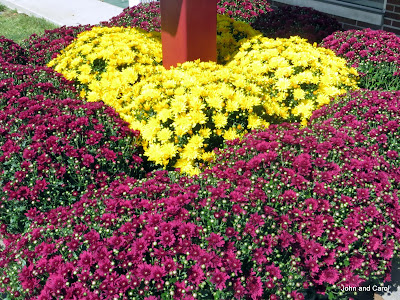 This lawn furniture was equally as colorful. 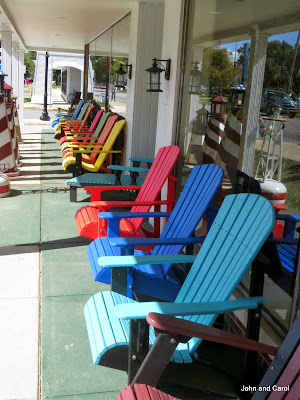 Have you ever heard of eating elephant ears? I hadn't. But we saw them for sale at the festival, after first spotting them at the flea market. For those of you from the western part of the country, they look like a large-sized sopaipilla or fry bread. 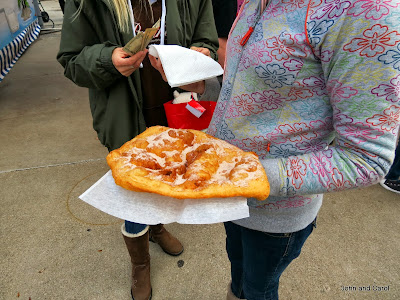 This is a miniature hay baler. 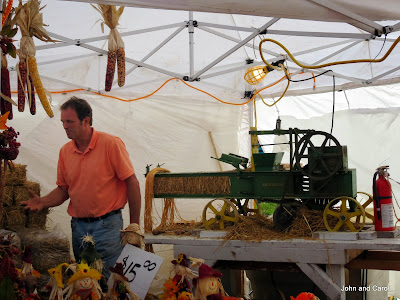 I had seen the cornhole game in campgrounds, but had no idea it was a commercial product. I thought they were homemade. Obviously not. 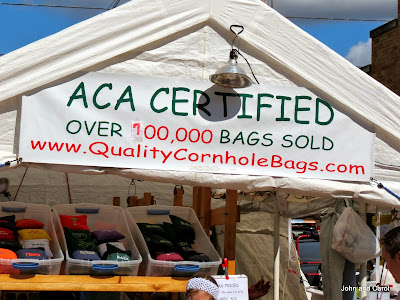 Read this sign carefully. They don't sell the products that use the new iOs7, they sell food made from apples. That included apple butter, apple bars and this delicious-looking apple strudel. 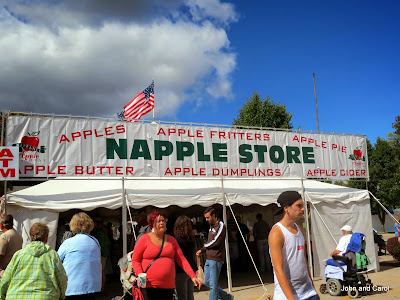 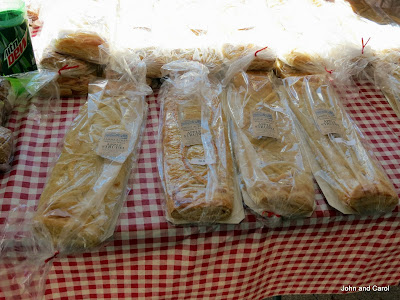 They also sold pieces of this 7-foot apple pie. The last 1/4 of the pie was on display in a downtown store. Below is a copy of the sign giving more information about the pie. 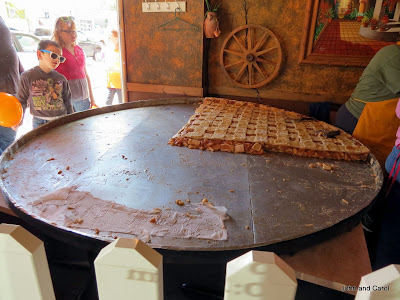 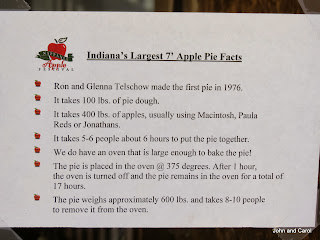 For 50 cents, you could buy a plain apple to eat. 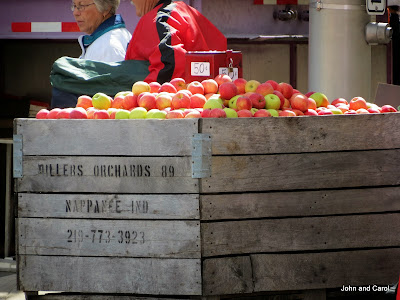 We saw an owl 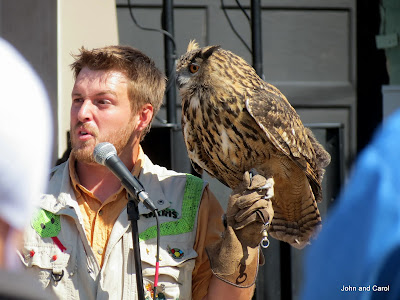 and a puppet show. 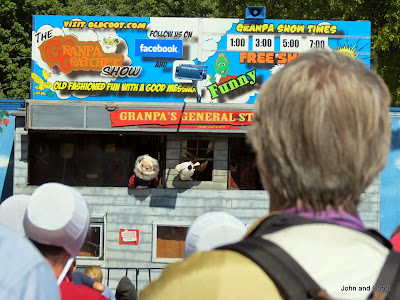 The downtown streets are decorated with painted apples. 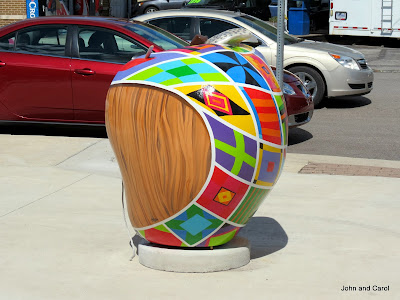 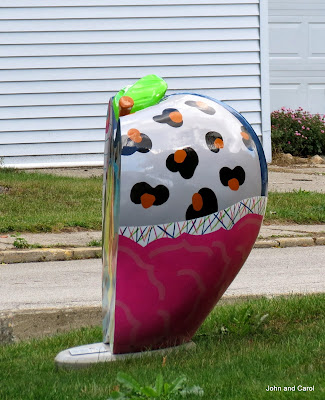 As we drive from town to town here in northern Indiana, we see beautiful farms. Thankfully, those clouds didn't produce any rain yesterday. 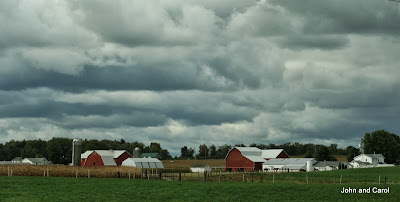