We were heading out for a walk when we heard some vehicle with a diesel engine really laboring up the road. It was so loud and slow, we wondered if it was a Sherman tank. When it finally passed by, we saw a 3/4 ton truck with a large motorcycle in the bed, towing a fairly good-sized travel trailer. We started walking up the road and saw this trail of drips. It gives a new meaning to a bread-crumb trail. Were they afraid they wouldn't be able to find their way out of the park? 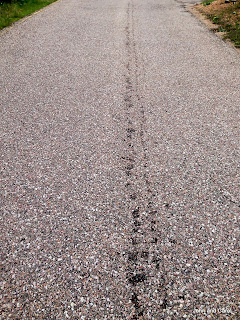 Then we heard the campground gate attendant call over the radio that a camper who had just left there had lost a large amount of some sort of fluid as they drove away from the gate. He suggested it might be transmission fluid. We started looking to see if we could spot that camper.

It didn't take long. We came on the noisy diesel truck, motorcycle and trailer right in the middle of the one-lane campground road. There was a large puddle of black liquid under the truck and the hood was up. "We blew the transmission," they reported. While they called their roadside assistance for a tow, we called the ranger on duty to report the blocked road.

While we were waiting for the tow truck, another camper came by, saw the problem, and offered to get a tow strap and pull the truck and trailer off to the side of the road. When they returned with their truck, they decided to unhook the trailer, tow the truck out of the way and tow the trailer to its campsite. Talk about helpful campers! 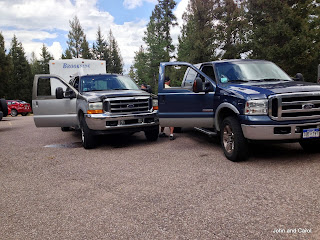 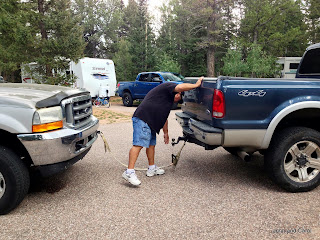 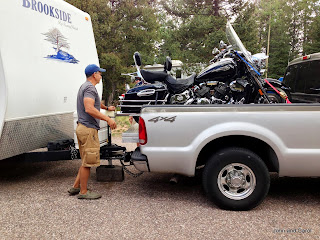 Since two park rangers had arrived to handle the situation, we went on with our walk. Soon, the friendly camper drove by, towing the stranded trailer. They were followed by a park ranger. 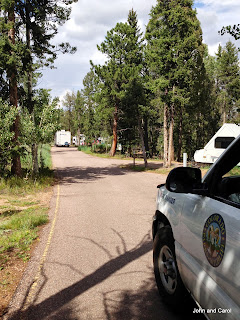 After we returned to our RV, we saw the tow truck responding to tow the disabled truck to a Ford dealership in Colorado Springs. Would you believe, this was the third tow truck called to the park today? As far as we know, it is the first time all summer a camper needed a tow. We just never know what to expect when volunteering in a state park.
Posted by John and Carol at 1:45 PM