Returning to Our Past

Sunday we returned to Castle Rock where John grew up and where we lived with our two sons from 1976 through mid-1984. We were operating Andrews Funeral Home, which we had just purchased from John's parents. The building housed both our home and the business, as well as an apartment. Our years there were challenging and filled with wonderful opportunities. We taught about death and grief all over Colorado. 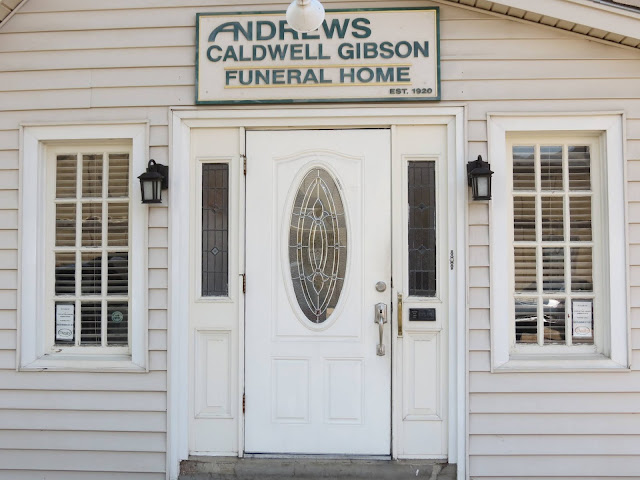 We sold the funeral home in 1984 to Loyce and Mattie Caldwell and Bob Gibson and moved to Wisconsin where John attended Nashotah House Episcopal Seminary.  They sold the business to a larger corporation and now it is operated by Dignity Funeral Homes.  The original building was constructed in the late 1800s as the Carlson Frink Creamery.  In  1920 it was purchased by Sam Livingston and converted into a funeral home.  Dignity plans call for the old building to be demolished and a new modern funeral home constructed there.  We were invited to spend time in the structure that was the Andrews family home from 1938 to 1984.  John's sister, Cindy, her daughter Tina and granddaughter Kelsey and our son Eric, wife Liz, and children Kylie and John also came.
We shared so many memories and stories as we looked at every nook and cranny of the building.
This is the chapel.  It hasn't changed a whole lot.  The chairs have different upholstery and the room is often used for meals and refreshments following funerals. 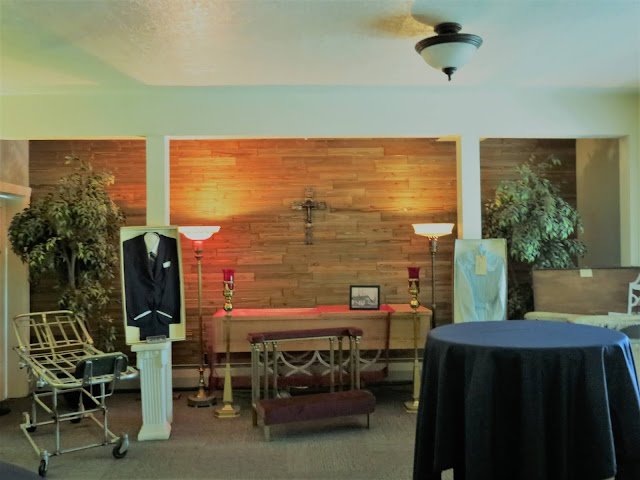 This was the office when we were there. 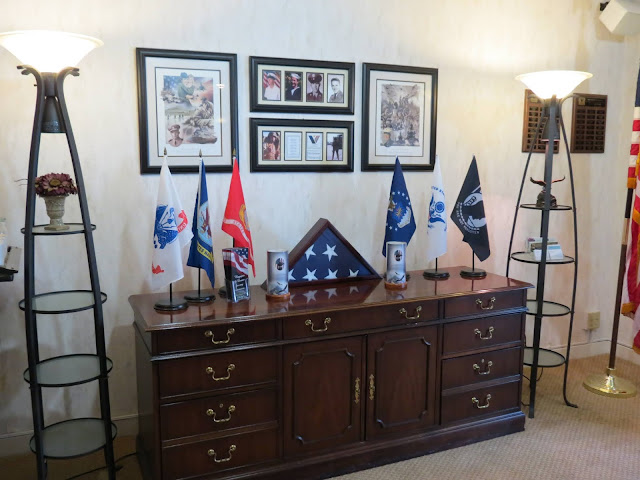 Many family gatherings, especially for Christmas and Thanksgiving dinner, were held in this room, our dining room.  Cindy's first comment was, "You finally got rid of the wall paper!"  Now it's the office. 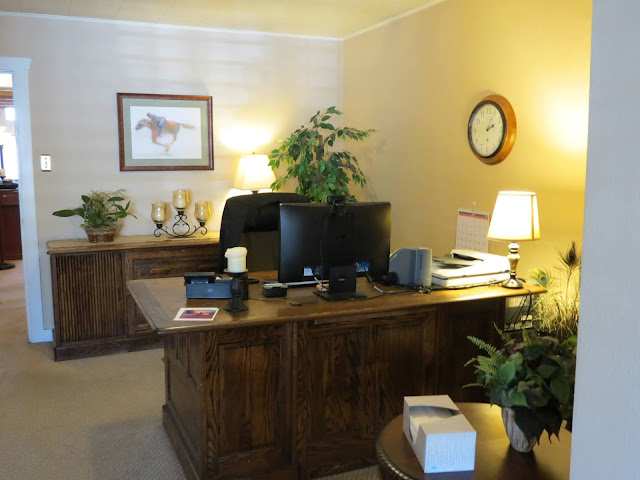 This fireplace was the centerpiece of our family room--minus the cremation urns, of course. 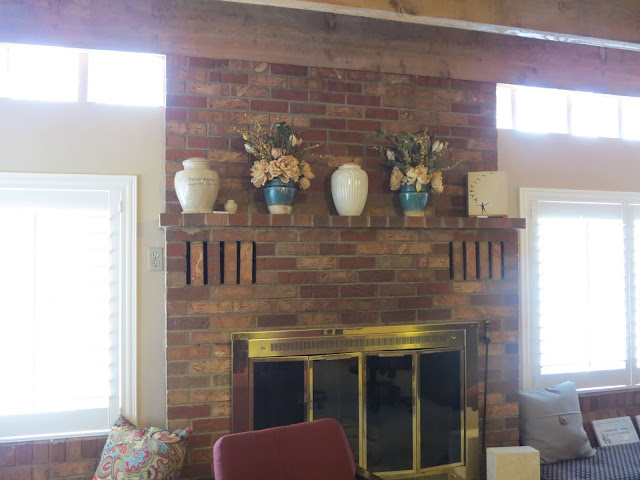 Eric enjoyed showing his family his old bedroom.  Our friend Chuck Bowman is standing in front of what was once John's bedroom.  Chuck grew up about a block away from our funeral home and got his start in the funeral home business there.  Today he owns a funeral home with his daughter and son-in-law in Kansas and he is the immediate past-president of the National Funeral Directors Association. 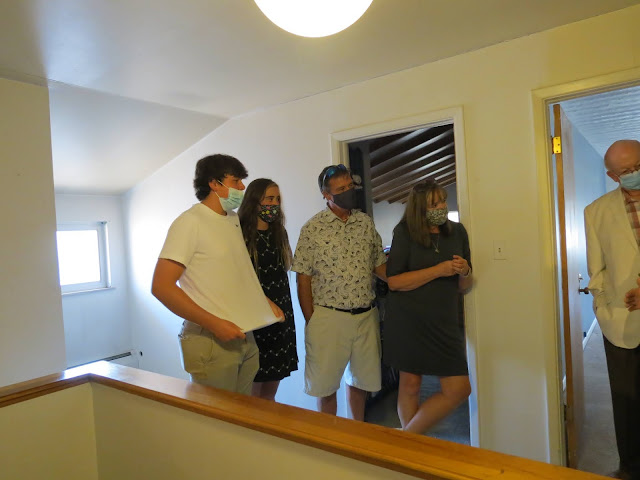 Our formal living  room still looks comfortable, though the furniture is new. 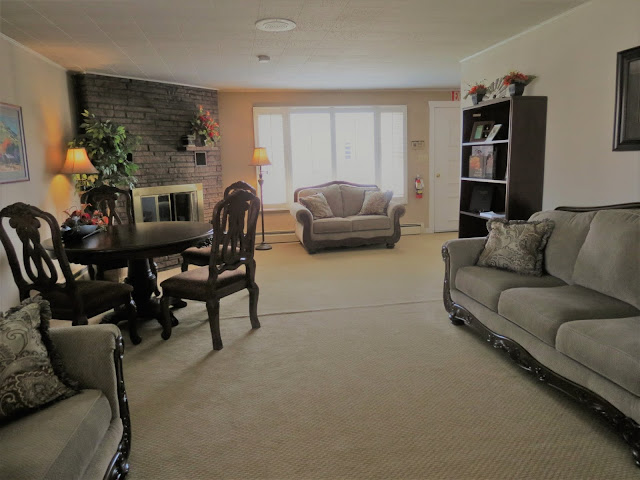 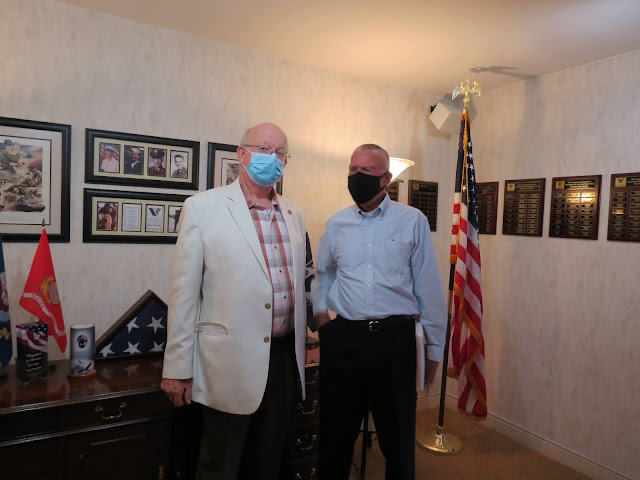 All of us, Cindy, Eric, John and I, lived in this house. 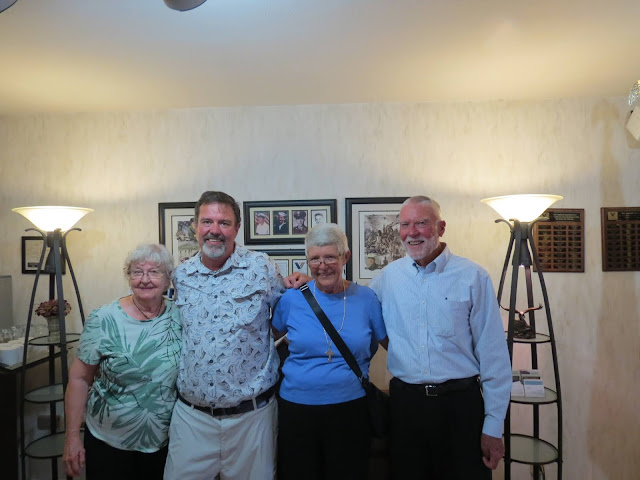 It was so good to explore our old home and share stories of our time there.   I am grateful for the opportunity to see it one more time before it is torn down.
Posted by John and Carol at 12:51 PM