Thursday we toured the old Wyoming State Prison.  It was housed in this beautiful building.  When we first saw it during a drive through town I had wondered if it was the county courthouse, but I was wrong. 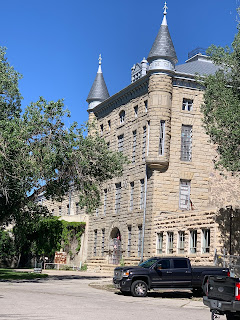 We have toured the Colorado prison museum in Canon City, where Colorado's prisons are still located.  The Old Max building in downtown Canon City reminds us of this one in Wyoming.

This is Lauren, the you women who led our informing and interesting tour of the old prison.  She is standing right of a display that explained how executions by hanging were carried out.  The physician who designed the mechanism didn't think any human should be responsible for executing another.  I can't explain the who process but the convict kicked over a container of water.  When the container was empty, the counter weight tipped a lever and the convict--who would have been standing in the top portion of this gray box on a trap door--would fall through the floor and die.  Some died from a broken neck, the majority by strangling. 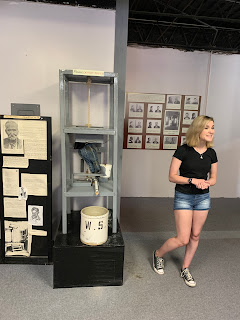 Here our guide is showing the small opening in the door where guards could look in on a whole row of cells.  The next photo shows the view through the opening. 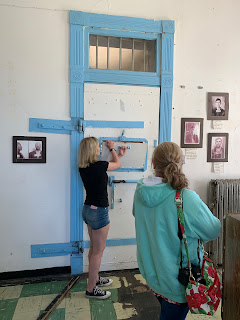 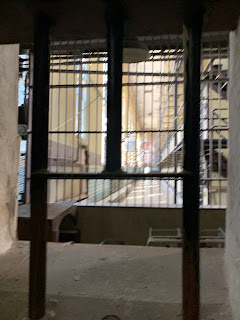 This is  the interior of a cell in the oldest portion of the prison.  When the prison was overcrowded, a second bunk was added on.  It would have been terribly crowded for two men. 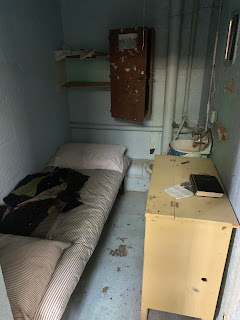 Here is the Johnson Bar lever which jailers could use to open either one cell or all cells in the block. 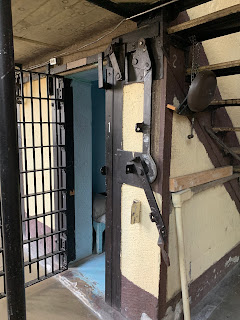 This dark corridor shows two levels of cells on the right and a wire enclosed walkway for the guards to see into the cells. 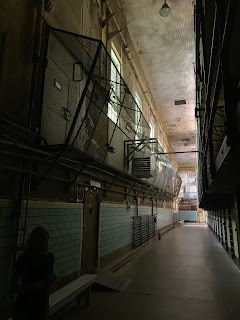 The white  spots on the wall of this cell were made with toothpaste.  The convict who lived in the cell (apparently for many years) used the toothpaste to hold up photos and newspaper clippings he enjoyed. 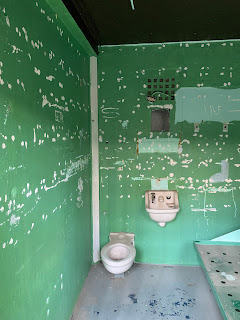 This man is Art Orcutt,  who was sentenced to three different sentences in the Wyoming as well as time in Leavenworth Federal Penitentiary in Kansas.  During that stay one arm was injured and amputated.  In the Wyoming prison, all inmates were required to work so he was assigned to painting murals. 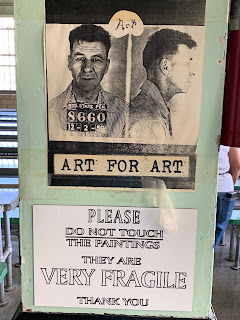 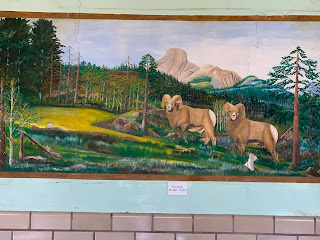 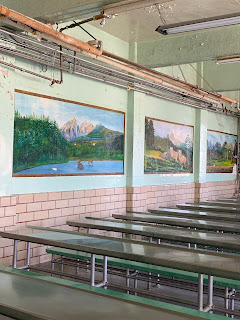 Lauren showed us the gas chamber. 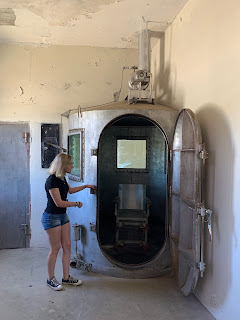 This is the chair was used four times for executions. 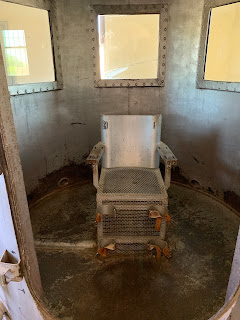 The prisoners facing a death sentence were in cells on death row.  For their hour of exercise each day, one at a time they were allowed to walk back and forth in this barred space.  The man seen in there in the photo was a member of our tour. 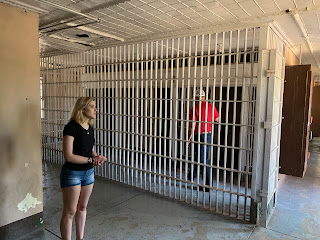