The Big Horn Basin is a plateau and basin area in northwest Wyoming, about 100 miles wide.  Ten years ago, in 2009, we spent two months volunteering at 7th Ranch in Garryowen, Montana.  When we experienced a long stretch of really hot weather, one of the owners, Sandy, suggested we head south to the Big Horn Mountains in Wyoming on our days off to cool down.  We would drive south to near Sheridan, then head west and enjoy the cooler weather.  At the time, we had no idea that the Big Horn Basin is a major archaeology and paleontology site.

This year we are heading south from Washington, Oregon and Montana through Wyoming to Colorado where we will visit family for nearly two months. After 4 nights in Billings, we spent two nights in Worland.  There we found the Washakie Museum, just down the road from our RV park.  We decided to check it out.

This mastodon statue is a landmark in town--our RV park said to go through town to the Mastodon then look for signs to the park--and it also marks the museum entrance. 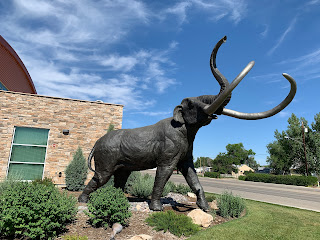 Inside we found numerous exhibits of the bones and other fossil remains discovered by paleontologists and archaeologists in the basin.  Dr. George Frison found incredible specimens of the animals that lived there 15,000 years ago.  (He has been given the Society for American Archaeology's Lifetime Achievement Award, the Paleoarchaeologist of the Century Award, and was elected to the Nation Academy of Sciences,  according to Wikipedia.)   Also found was evidence of early human occupation from when the mastodons were hunted,  going forward to the Native Americans that lived in the area and the European settlers who came to raise cattle and sheep.

This is the bird-like foot of the Deinonychus, a dinosaur that shows a link between birds and dinosaurs. 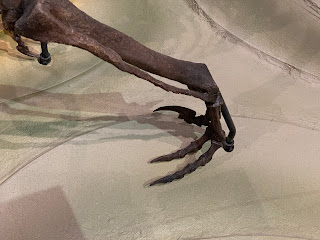 These are some of the bones of mastodons who were driven over a cliff to allow the natives to kill them for food, hides and bones, which they used as tools. 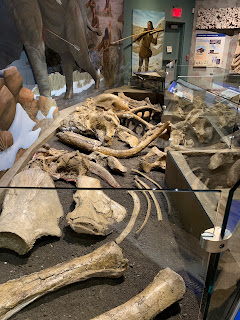 We didn't realize there are lots of petroglyphs in the basin.  The display shown here in part, included lighted examples of the petroglyphs.  We could touch a button next to a description (here a hunter with a shield) to see what it looked like.  Very good idea. 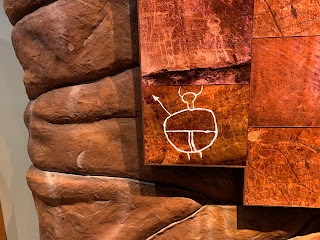 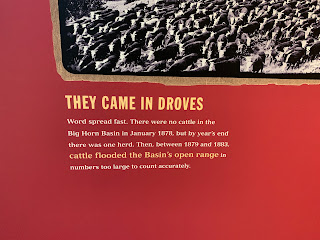 Once settlers discovered that the basin was a good place to raise cows, they came in droves.  This display says that in January 1878 there were no cattle in Big Horn Basin, but by the year's end there was one herd.  Between 1879 and 1882 so many were brought that the number was too large to count.

Next came sheep and the predictable conflict between cattle barons and sheep herders.  This is an example of a sheep herders wagon.  That was interesting since we have seen numerous wagons from afar over the years. 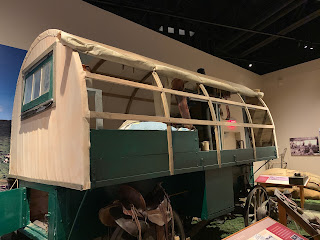 We learned about raising sugar beets in Wyoming, with the Holly Sugar Company of Colorado getting the crop started here.

Since we are Colorado residents and lived most of our life in that state, it was good to learn more about our neighbor to the north. We often pass through here in our RV travels.
Posted by John and Carol at 1:48 PM