It has been 17 years since we visited Sequoia National Park in California, home to the largest trees in God's creation.  The Sequoia has the largest volume of wood of any tree.  According to the park brochure, at least one tree species lives longer, one has a greater diameter and three grow taller. The sequoia grows naturally only on the west slope of the Sierra Nevada Range between the altitudes of 5,000 and 7,000 feet.

The General Sherman Tree is estimated to be 2,200 years old.  Every year it grows enough new wood to produce a 60-foot-tall tree of usual size.

Yesterday was rainy and, at about 6,000 ft and above, snowy.  We didn't make it to the General Sherman Tree.  Because of the weather, we drove through part of the Giant Forest but turned around before we got that far.

Just look at these photos of the trees. 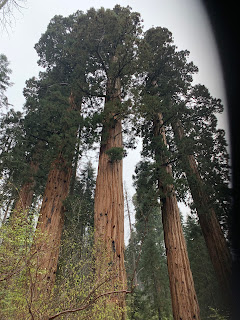 The bark of the Sequoia is up to 31 inches thick, providing good protection from fire. 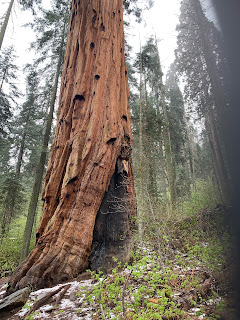 Here is a photo I took of one of the trees.  Notice the fire scars on the bark.

Those 4 people don't take up as much room on the forest floor as even 1/3 of what the tree trunk uses. 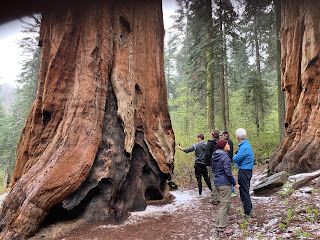 John took this picture of me, dwarfed by the tree.  Notice the snow at my feet. 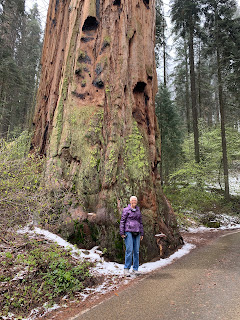 We are staying in Visalia, a town on Highway 198 west of Sequoia about 35 miles.  The temperature in the park got down to 33 as we drove higher in the park.  And just look at the curvy road.  No wonder they recommend no vehicle over 22 feet drive there.  We went through numerous 10 mph curves. 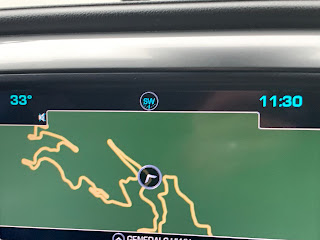 At times this was our view of the trees as we drove along  Notice the slush on the road and snow on the edges--on May 21! 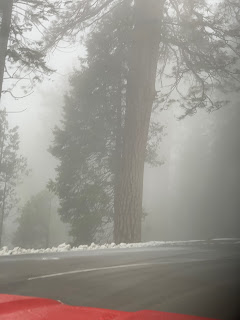 The Marble Fork of the Kaweah River flows through the park.  It was full of rushing waters. 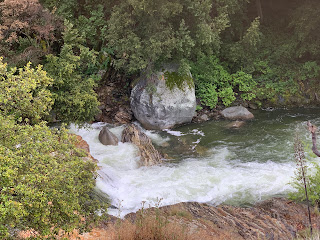 Kings Canyon National Park is north of Sequoia and in good weather you can drive from one park to the other. It was not possible yesterday because of the road conditions. We remember that park as being beautiful, but being from Colorado, mountains and canyons aren't quite as special as the trees in Sequoia so we didn't plan on visiting there again this trip.

In 2002 on our visit to California, we also went to see the Redwoods that grow near the coast. We won't be going there this time as we are going to head north up the middle of California, then Oregon and Washington. We haven't spent as much time in that part of these states in the past and want to explore some new areas.