During our two months in the United Kingdom we visited 5 cathedrals. I have already blogged about the first one we saw, Coventry, which we visited August 2 during our stay in Birmingham. Four days earlier we had worshiped in St. Philips Cathedral in Birmingham.

The Baroque style church was consecrated in 1715 and designated as a cathedral in 1905 when the Diocese of Birmingham was formed. The congregation was friendly and we enjoyed the Sunday morning Holy Eucharist. The church is beautiful.

This is the exterior. 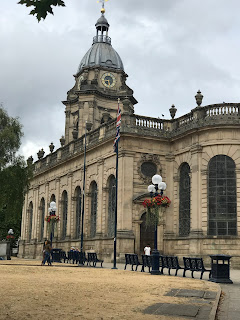 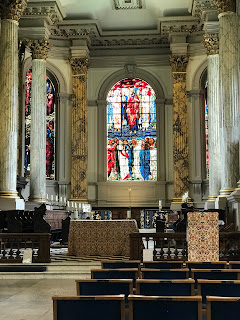 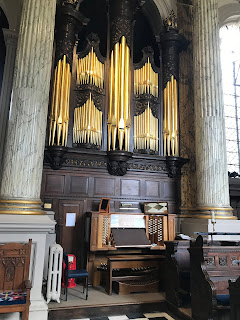 The stained glass window at the rear of the church. 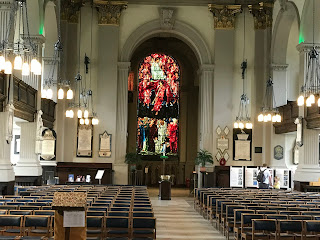 During our stay in Folkestone we explored Canterbury Cathedral, one of the oldest and most famous church structures in England.  It is the seat of the Archbishop of Canterbury, the head of the worldwide Anglican Communion. 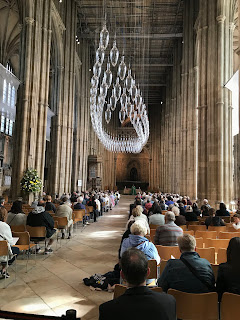 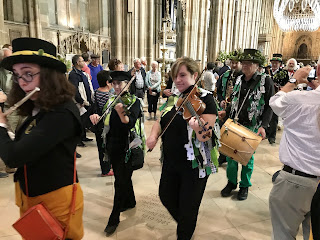 It was Saturday when we visited the cathedral and we watched this unusual procession out of the church.  We learned it was the annual Hop Hoodening. 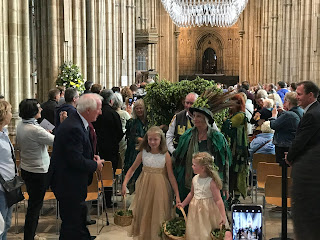 According to Wikipedia, "Hoodening, also spelled hodening and oodening, is a folk custom found in Kent, a county in south-eastern England. The tradition entails the use of a wooden hobby horse known as a hooden horse that is mounted on a pole and carried by an individual hidden under a sackcloth. Originally, the tradition was restricted to the area of East Kent, although in the twentieth century it spread into neighbouring West Kent. It represents a regional variation of a "hooded animal" tradition that appears in various forms throughout the British Isles."

This cross and altar mark the martyring of Thomas a' Becket, the archbishop of Canterbury who was murdered in the church in 1170, after the king, Henry II, was heard to say, "Who will rid me of this man?"  Some of his knights went to the Cathedral and stabbed him to death. 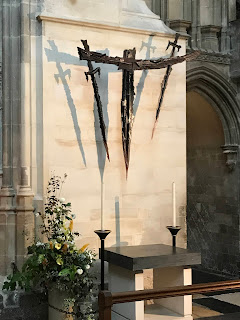 This is cloister walk around the inner court of the cathedral. 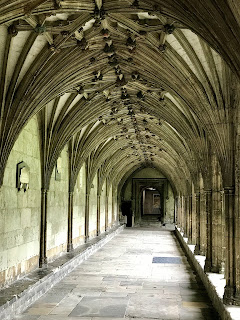 The stained glass windows are beautiful. 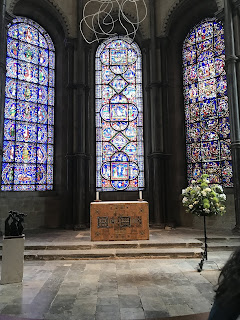 A photo of the high altar.  During World War II, the Germans bombed the cathedral and the church archives, which were stored off to the side of the altar, received a direct hit.  Many records from churches throughout the diocese were destroyed. 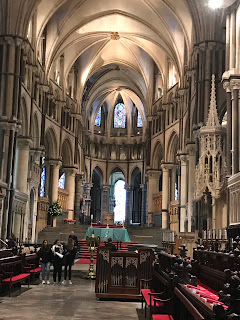 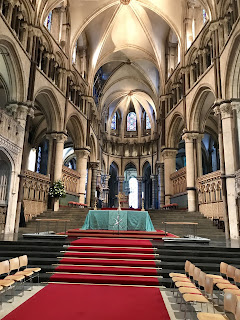 In Norwich we went to Norwich Cathedral, dedicated to the Holy and Undivided Trinity, on a Wednesday. The building is stunning and we were able to attend the noon celebration of Holy Eucharist.

We entered through a door in a side building. 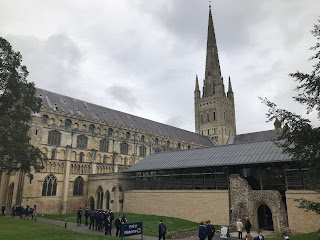 This view of the high altar shows the beauty of the interior.  They had a creative method to allow visitors to see the ceiling detail without looking up and risking falling over. 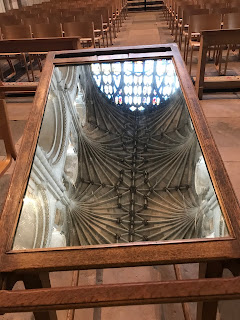 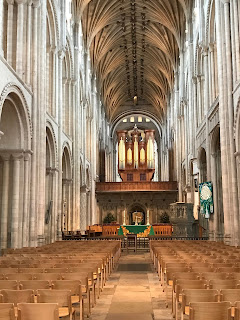 This is one of the other altars in the cathedral. 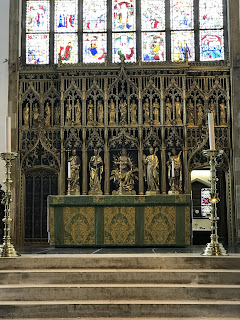 We spotted this cat asleep in a chair near the altar.  It reminded us of one of the 2 cats we used to have, Partner.  The church sexton told us the cat had adopted the cathedral and lived in the courtyard outside. 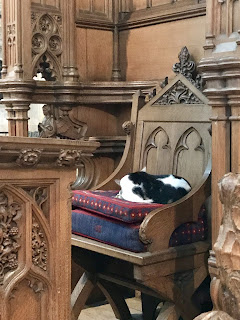 This a view of the church spire from the courtyard. 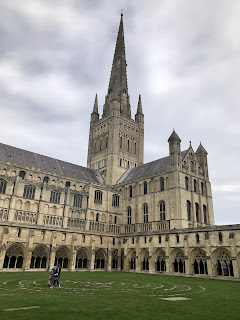 In London, we visited one last cathedral, St. Paul's. We had worshipped there on a previous trip to England but we wanted to see the church again. It was Monday when we walked along the bank of the Thames to St. Paul's. We looked around and took some pictures then went out for lunch, returning for the 12:30 Eucharist.

This is a close view of the free-standing altar in the nave. 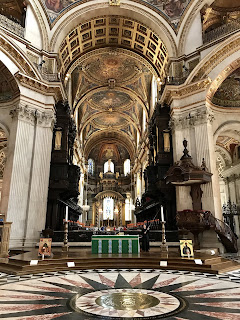 And a view of the whole nave from the entryway. 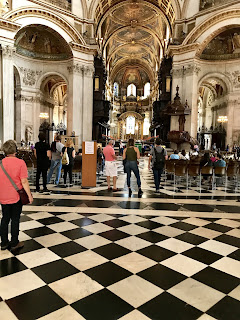 After the celebration of Holy Eucharist, we attempted to take more photographs but one of the tour guides scolded us. The service bulletin read "no photography during services" so we waited till it was over. She wasn't satisfied and watched us until we left the church.


We visited one more iconic and famous church during our final days in London, Westminster Abbey. It isn't a cathedral but it is where coronations for kings and queens are held and royal weddings conducted. 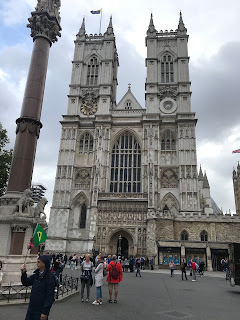 This gate provides entry to one end of the Abbey.  As you can see, there is heavy security. 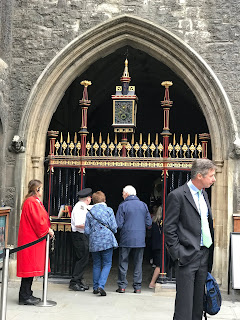 Another view of the entry. 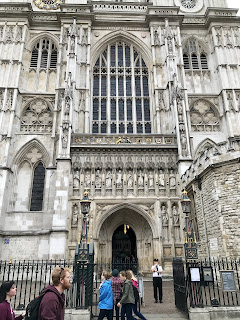 The other end of the Abbey. 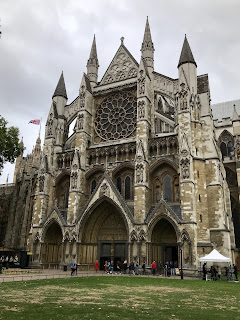 To tour the church you have to purchase tickets and enter through this door.  We wanted to attend the 12:30 Holy Eucharist and we didn't need a ticket for that so we entered through the other end.  We could not take pictures inside during the service.  On our first visit to London in 1995 we visited Westminster Abbey and happened to walk in just at the mid-day service started.  What a serendipity moment that was.  This year, we worshiped in the Abbey on our last full day there.Security was not nearly so tight in 1995, either in England or the United States.