(This is a post by John, who did the driving during our trip.  The photos, which I took, were often shot from a moving vehicle so they may not be really sharp and composed.)

It is an understatement to say “driving in England is a challenge. We drive on the left side of the road, we expect our lane of travel to be clear unless there is an accident, and we would never expect a sign announcing “on coming traffic may be in your lane of travel”. The opposite is true in England.

We picked up our first rental from Hertz in Birmingham. The agent walked us to the vehicle, thanked us for the business and disappeared. The Vauxhall was a small two-door with a four-speed stick shift on the floor. I got into the car, adjusted the rearview mirror (which was in the center of the front window to my left) and studied the shift pattern which was clearly marked on the stick shift (again it was on my left). I tried to start the car and nothing happened. It took a while before I discovered that the clutch had to be depressed before the engine would engage. Finally, I took a deep breath, put the vehicle in gear, popped the clutch and off we went.

As I drove to a parking lot near the National Trust apartment we were staying in I kept repeating to myself, “the center line must be to my left…the center line must be to my left”. I made a right turn and just naturally ended up in the wrong lane of traffic with a car coming toward me. That polite Brit simply stopped and flashed his lights at me. That was my first mistake.

We had been advised to buy a TomTom GPS to help us navigate the roads. We bought a cheap one before I drove again. It was a gift. I have no idea how we would have found our way without it.

We used the car to drive to the Cadbury Candy Company. That trip was uneventful and it gave me some practice driving on city streets and navigating the roundabouts. There seems to be roundabouts at almost every intersection in England. There is an accepted pattern to use a roundabout. Most roundabouts have two lanes that can be used to enter. If one is going to exit onto either the first or second roadway, it is appropriate to enter the roundabout from the left lane with the left signal flashing. If you plan to take the third exit you enter the roundabout from the right lane, signal a right turn, enter the inside lane of traffic for the first two exits, then turn on the left signal, move to the left and finally exit at the third exit.

The male British voice on the TomTom would announce a roundabout saying, “From the right lane, cross the roundabout and take the third exit.” We must have heard those instructions 800 times. I admit that I got honked at more than once before I got used to the approved pattern of entering and exiting a roundabout.

The day we left Birmingham was eventful. I pulled out of the parking lot, turned left, entered a roundabout and then had to stop at a signal light. The light changed and I thought I had the car in first gear. I popped the clutch and the car began backing up. I stopped. I replaced the gear shift and released the clutch. Again, the car was in reverse. The driver behind me honked, sweat formed on my brow, and I again adjusted the gear shift. By this time the light had changed to red and the driver behind me had moved into the lane beside me. He glared. I readjusted the gearshift and found that the car was now in first gear. To my credit I’m convinced that there was a problem with the shift because that happened several more times. There was nothing I could do except be prepared for that to happen.

Our first trip was about 100 miles. Most of that trip was on a three-lane motorway. The speed was 70 miles per hour. Slow moving vehicles are to use the far left lane which, again, is just opposite to driving in the States. It took some time to adjust to the road signs. If a driver had some sort of mechanical problem they would pull off the motorway at a spot marked with a sign SOS. If traffic was heavy and congested electronic signs posed above each lane would flash a lower speed and everyone was expected to adjust to that new speed. Exits were called junctions, loop roads were called orbitals, and drivers were cautioned to “drive dead slow” when approaching any hazard.

Leaving a motorway could present difficult problems. Most roads, other than motorways, consisted of two lanes. The shoulders were either very narrow or did not exist. Without shoulders motorists who needed to park had no choice except to park with their vehicle halfway off the road and halfway in the lane of traffic. That would result in making a two-lane road into a road containing one and a half lanes. Opposing traffic had to adjust to the hazard or face the consequences. 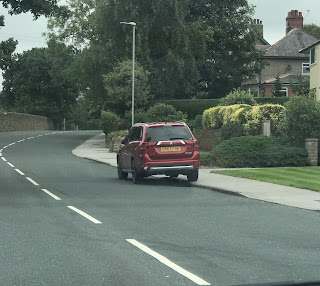 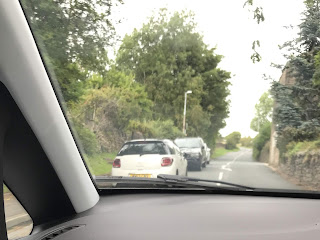 Driving in towns was a challenge. There is no uniform set of street signs. A street sign might be on a post, attached to a building, or simply missing. Thank goodness for the GPS. Most towns had no space for parked cars on the street; so again, cars would be parked half on and half off the designated lane of traffic. 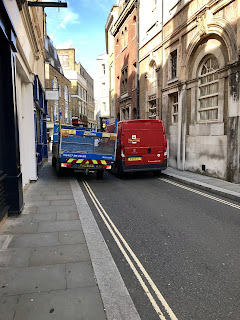 Parking lots were few and far between. Popular cities like Oxford and Canterbury had park and ride lots. Those were convenient.

Car rental agencies rent cars for up to one month. The car has to be exchanged for another car at the end of a month’s time. We picked up our second rental in Oxford. Because the Hertz agent never answered his phone, we were forced to rent our second car from Avis. The Avis rental was a different make and model and it took a little time to adjust to the differences.

The second National Trust property was located at Hebden Bridge. The road from Hebden Bridge to the cottage we rented was a very narrow two-lane road which had sections lined with stone walls. There was no room for moving out of your lane. Several stone houses were located on that road and there was less than 6 inches from the traffic lane to the stone walls of those homes. I drove slowly, but the locals didn’t. 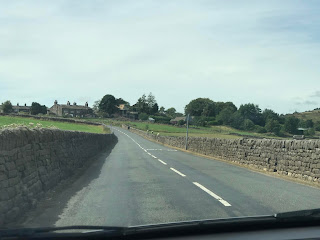 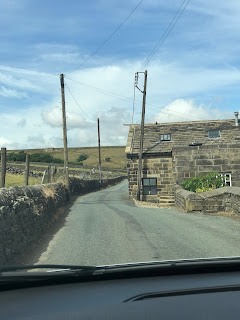 One of the most beautiful National Trust properties we stayed in was located in Cornwall. Boscastle is a tiny community located on the ocean in a very rural area. The roads around Boscastle were terrible. Most were one lane wide so a driver had to stop when meeting opposing traffic, then one of the vehicles had to back up until the other car could pass. That happened to me on a stretch of road that simply didn’t have anywhere wide enough pass. The sides of that road were lined with thick hedges. Both the on-coming car and I stopped. To my shock and surprise, the other driver slowly preceded toward me. I pulled my car to the left and slightly into the hedge. The other driver did the same. When we reached a point he and I were exactly opposite, I looked at him. He smiled, then formed a face that expressed real fear, and laughed. We successfully passed each other, much to my surprise.

England is densely populated and the roads in and around cities are extremely crowded. This kind of traffic was not unusual.

I was relieved when we returned the rental to Avis. I felt good that I was able to drive for 2 months in England; but I much prefer driving in the States.
Posted by John and Carol at 2:35 PM