When I saw that there was a National Trust cottage in Wales that was kind of/sort of on our way from our cottage apartment in the Temple Sowerby Manor to the north and the southern part of England, I quickly decided a 3-night stop in Snowdonia National Park in Wales would be a good idea. We had never been in Wales. I knew virtually nothing about it except people there speak another language and have a different kind of English accent.

Wales is stunningly beautiful! There is water everywhere, flowing in rivers, cascading down hillsides, falling from the sky and filling the air in the form of high humidity. In fact, it misted and rained the whole first day we were here. The second day had some decided sunny breaks (a weather term we learned while volunteering near Astoria, Oregon, near the Pacific Coast).

This was our misty view the first morning. 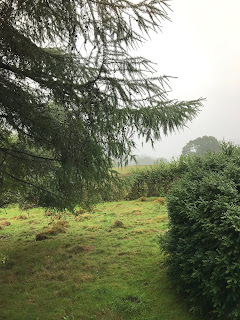 There were Highland cattle outside the cottage one day. 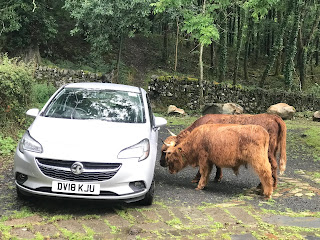 During our hike that Thursday, we saw an incredibly green landscape: shamrocks, ivy, moss-covered ground, trees and stone walls. It is so different from the saguaro desert landscape of southern Arizona, and even from the plains and mountains of Colorado. 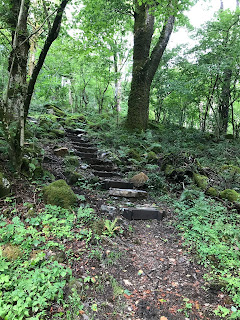 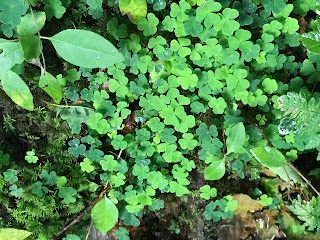 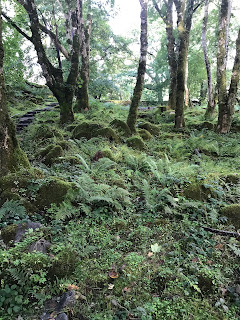 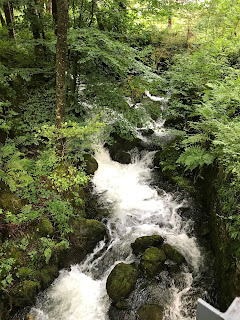 I hadn't realized that the Welsh language is Celtic, like the Scots or Irish Gaelic. Everything is so green we had a feeling a leprechaun might peek out from behind a tree. We were only 10 miles from the coast of the Irish Sea at Barmouth where Ireland isn't far away on the other side of the Irish Sea.

Friday, we drove to the nearby town of Dolgellau, an old market town with more than 200 buildings on the list of historic structures, the largest concentration of such buildings in Wales. The town center is full of narrow and twisting lanes, lined with very old buildings. We loved it! The town was a regional center for the Wales wool industry. Later, it became a tourist center when the Wales wild landscape became a favorite for genteel travelers. And the Eurospar grocery store was the best we have seen so far in the United Kingdom.

I had to take a picture of the Robinsons pup in town since that was my maiden name. 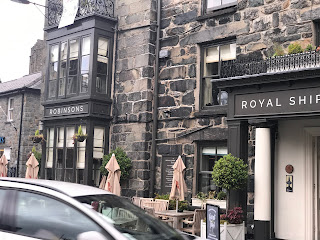 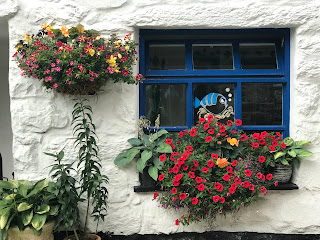 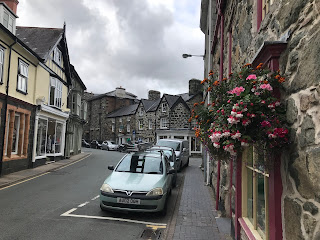 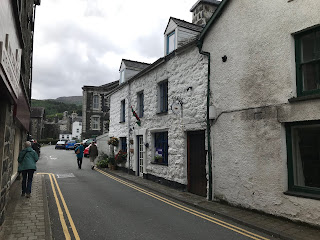 This is St. Mary's Church in Dolgellau. 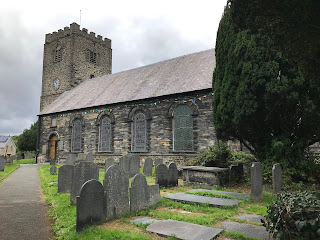 Nant Las, our small cottage was built in the 1800s as an observatory on the Dolmelyllyn Estate along the River Gamlan. The beautiful Black Falls are one of the most scenic spots in the estate and an easy walk from the quirky little cabin. Containing only 4 steps inside—nothing compared to the Back to Back cottage or Widdop Gate Barn—Nant Las has 4 rooms, built in a straight line: sitting and dining room, bedroom, kitchen and bathroom.

This is a view of the estate home. 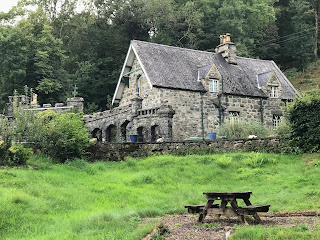 And the exterior of our little cottage. 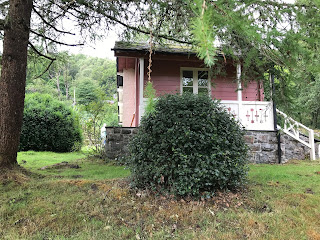 There is so much to see in Snowdonia National Park, enough to keep up busy for at least 2 weeks. But we are ready to move on to a new cottage. With each move we have to learn how new kitchen equipment, heating systems and plumbing work. We are shopping in new grocery stores and I am cooking without recipes or any spices or herbs except salt and pepper and fines herbs. Especially at our age, this is draining—really hard work.