Romans in the Cotswolds

Like me, I'm sure you learned in grade school about long ago events:

the Pilgrims sailed on the Mayflower to America in 1620 and celebrated the first Thanksgiving in 1621.

The Cotswolds history makes all that look like recent events. Not only were the first colleges at Oxford, University, Balliol and Merton, built in the 1200s, the Romans had a fort in Cirencester from about 41 BC to 400 AD. Monday we spent time in Oxford, appreciating the medieval buildings, narrow streets and nice shops. 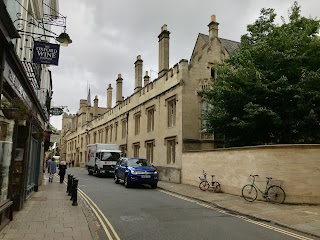 Tuesday we explored Cirencester and the Corinium Museum, dedicated to the Roman past there—amazing. Several years ago, we spent three years volunteering at Casa Grande Ruins in Coolidge, Arizona. That structure, as well as Mesa Verde outside Cortez, Colorado, illustrate our American ancient history—occupied between about 700 and 1300 AD. Like I said, recent events compared to the Roman fort.

We spent quite a bit of time in the Corinium—our ticket was good for the entire day and it would have taken many more hours to see all there was to see and read than we had to spend there. We learned about the Roman soldier's life. Members of the Roman Legion were well paid and their term of service was 25 years. They were housed in barracks of 3 men to a room. If a member was injured during that term of service and could no longer serve, there was some financial provision for his family.

The Romans had established life around towns and cities and they brought that lifestyle to Britain (and possibly Gaul) during their occupation here. Their architecture was advanced—they even had heated floors in their homes. A fire was built in a fireplace on the lower level. Columns were built to support the upper floor and ducts installed in the walls to carry heat to the upper floor. The fine homes had intricate mosaics on the floors. Several of those were found in Cirencester and were reassembled in the museum. 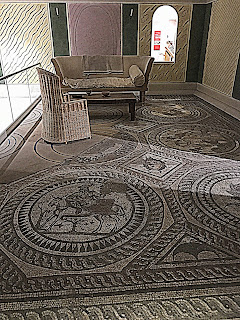 The built enclosed garden areas in their homes. 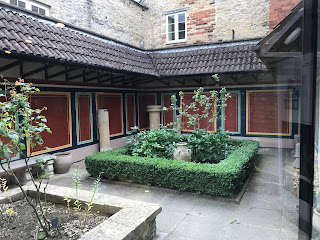 This is a section of ancient mosaic floor. 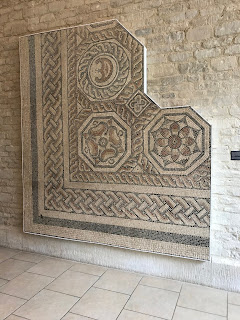 This model shows how the floors were heated in the houses. 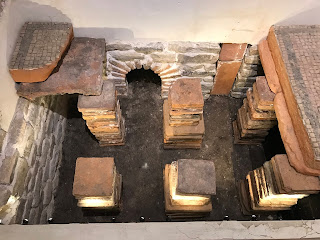 Jewelry, tools, locks, items of board games all have been discovered. The Romans were skilled goldsmiths and metal workers. 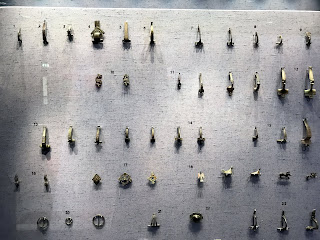 We saw gravestones for the graves of some Roman officers and learned that first the used cremation after death and later changed to earth burial. The cemeteries were outside the walls of the fort.
Cirencester has a very large cemetery in use today at the location of the Roman burial grounds. 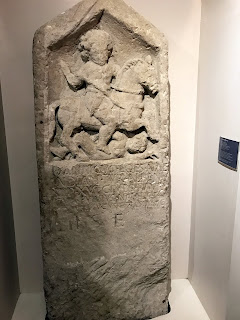 There was information about the religious practice of the Romans and of the Celts, one of the local populations conquered by the legions. We saw images from the Celtic temples as well as the Roman religious places. There was also a coliseum there, also. It could hold the entire population of Corinium—Romans, locals and slaves—for events such as gladiator battles.

On an earlier trip to England I was impressed when we saw a Roman lighthouse near Dover and The floor of St. Augustine's chapel next to Westminster Abbey. It is exciting to find evidence of the lives of these long ago people..

Sent from my iPad
Posted by John and Carol at 7:09 AM